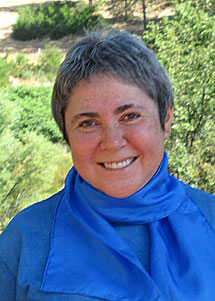 With joy and gratitude for her life, we want to tell you about the passing of Nayaswami Maria.

Many of you may know her through the creative and inspiring work she did on the Ananda website for the past five years. Maria died peacefully at her home at Ananda Village on Tuesday, December 7 at 3:33 pm, only three weeks after being diagnosed with brain cancer.

Born in the Soviet Union in 1958, Maria lost both of her parents while still a teenager. She and her older sister, Bella, were able to immigrate as refugees to the United States in 1979 with the intention of seeking the freedom to live a spiritual life. While traveling from the Soviet Union to America, they met a consulate employee, who later gave them Autobiography of a Yogi in New York. In 1980 she and Bella moved to Ananda Village.

Maria has spent the past 30 years serving her Guru in various ways: in Ananda Assisi, in Ananda Seattle, on Swamiji’s staff at Crystal Hermitage, as a Lightbearer and teacher, and for the past five years she has been the driving force and creative energy behind Ananda.org. Through this website, she was able to bring inspiration to millions of people around the world. With no background in website development, Maria taught herself this skill through seeking out the training she needed. Under her direction, our website has emerged as the single most important tool that Ananda has for serving people at a distance. In 2009 she and her husband, Devarshi, the head of Ananda’s Kriya Ministry, took Nayaswami Vows.

Over the past ten years, Maria has survived two serious bouts with cancer involving major surgery, chemotherapy, and radiation. Still she continued to serve whole-heartedly in the demanding work of keeping a website vibrant. Once when she came into work during the middle of radiation treatment, someone said to her, “Maria, you don’t have to come in to work.” She replied, “You don’t understand, I must come in to work. It’s what gives me the strength to fight this battle.” 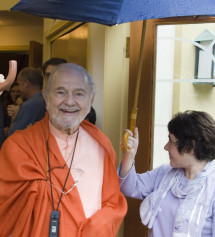 Maria holds the door, and an umbrella, for Swami Kriyananda

In February 2010, Maria gave a beautiful talk during Inner Renewal Week at The Expanding Light in which she told the story about a humble Indian squirrel, who asked Lord Rama what he could do in the great battle of the Ramayana. After telling the story, she said, “I really want to be a part of this great work that’s happening, but what can I do? I can serve God all day long, day in and day out, year in and year out, until my breath leaves my body — in samadhi or in death, whichever comes first — in the hope that at the end of it, my Guru will take me up in his arms and say, ‘Well done!’ And I can see in all your eyes that I am not alone.”

Maria first realized that she had a brain tumor while helping to lead a Kriya Retreat at Ananda’s Dallas center. In spite of starting to experience headaches and extreme dizziness, she gave the Sunday Service talk that Devarshi said was the most beautiful and inspiring he’d ever hear her give. When she told Devarshi that she knew she had a brain tumor, thinking more of consoling him than of her own needs, she said to him, “Don’t worry. I’m free.” 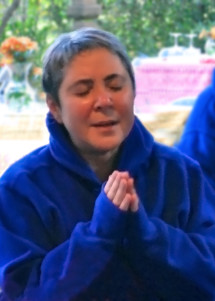 Maria chanting with Ananda members in Dallas, the day after she realized what was happening in her brain. Photograph by Lee Courtney

Within a few days, she was unable to walk or open her eyes. As Devarshi was taking her in a wheelchair to get a brain scan, she could feel his concern for her, and said to him kindly but strongly, “Detach yourself, control the reactive process(1), live the teachings.”

After being medically diagnosed with brain cancer, she spent the remainder of her time consciously disconnecting from any involvement with the world, and going deep within to commune with God. During this time, there was constantly a vibration of great peace and sanctity around her.

In a recent talk, Swami Kriyananda said of Maria, “I have seen her change over the years — she had cancer of the breast years ago, and she had chemotherapy and went through a great deal of pain because of that — and now she’s reached a point of maturity where nothing can touch her.”

Nayaswami Maria’s last words, spoken a few hours before she died, were “Aum Guru.” At the very end, while Nayaswami Devarshi, Jyotish and Devi meditated and prayed by her side, she took a few deep breaths, relaxed, and her soul slipped from her body into the arms of her Guru. We are sure Master greeted her with the words: “Well done.”

There is one woman at Ananda Village now who is on the point of death. Her brain is completely frazzled. There’s all sorts of things going on: tumors, and so on. There’s just no hope for her.

But she’s taking it very calmly, very peacefully, and she says that it’s just right.

I have seen her change over the years — she had cancer of the breast years ago, and she had chemotherapy and went through a great deal of pain because of that — and now she’s reached a point of maturity where nothing can touch her.

It is so thrilling to see people reach that point of understanding, where death itself is welcome — it doesn’t matter. You know that you have accomplished what you needed to accomplish, you know that you are who you want to be, and with all of this, you’ll see that underlying all of life, there is bliss.

At the end of it all — when you’ve gone through it all, at the end of this long trail, seeking who you really are — you’ll understand that it was well worth it.

Every saint who has ever found God said that it was well worth it. 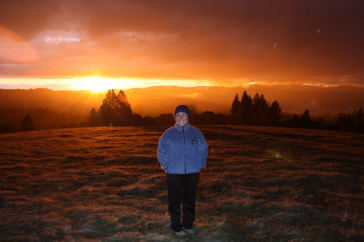 A shining light has passed out of this world, and into another. It’s joyful and sad at the same time.…

It is always hard to lose a great soul. Even though one mentally understands that the soul simply leaves the body as we all change the clothes at the end of the day, it is still very sad to say good bye to a great friend. I first got in contact with Maria through e-mails…

I am inspired to write this blog by the example of one of Ananda Sangha’s dearest spiritual sisters. Our sister has reached the point in this life when God is calling her Home. She lies in her bed at home, close to…

In the Kriya Initiation offering ceremony, the minister makes the suggestion to “place your flower on the altar facing out, so that everyone might enjoy it.”

If you knew Maria, please take a moment to share a “rose petal” from her life, as you experienced it: a fond memory, an inspiring thought, or a funny, uplifting story.