Or, “What Happened At Our House During the Big Storm.”

A huge oak tree fell on our dome-home at noon on Friday in the middle of a large windstorm. We were at home, but not hurt. We have quite a bit of damage to the dome, but we have received tons of help on every level and we will be able to keep living there while repairs are happening. We are very grateful to God and Gurus, but certainly would appreciate your prayers at this time. It was and is all quite an adventure, full of challenges and many special blessings. If you want to know more details, read on: 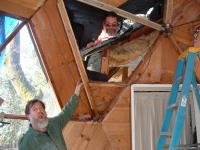 A big storm and high winds were expected here including power outages and all that sort of thing. But we are used to it out here in the country – it happens every winter – and we thought we were prepared. Sudarshan and I both came home early from work because the electricity had gone off everywhere and it was difficult to work without it. This was a great blessing, because we could start dealing with everything very quickly after the tree fell and get help also. So at 12 noon, I was sitting at the dining room table eating lunch and Sudarshan was a couple of feet away from me, talking on the phone. Our kitty Grayson, who is generally a quiet cat, starting yowling a lot. We tried to calm him, but he wouldn’t be calmed and finally went to the bedroom and hid (intuitive cat – they often seem to know these things ahead of time).

One of the big black-oak trees in our front yard was uprooted by a huge wind gust and thrown on to the house, hitting the dining room area about 2 feet from where I was sitting. I saw it coming at the window out of the corner of my eye, but there was nothing I could do. I felt very calm and was mostly surprised to see all the pictures and a mirror flying off the walls all around me (the mirror didn’t break). The big window beside broke and plexi-glass flew my way, but again didn’t hit me. Sudarshan calmly said to the person on the phone: “I’ve got to go now. A tree just fell on Savitri.”

Naturally the friend he was speaking to was shocked, but she could hear me saying in the background: “I’m OK! I’m OK!” I stood up, folded my hands and said a prayer of thanksgiving to my guru. Our phone friend hung up and called her husband and lots of other guys in the community who were there with chain saws and tarps within 20 minutes. They worked for quite some time under very dangerous conditions. The storm was at its full furry, wind howling, debris blowing about. It was spectacular. They were able to chain-saw the tree carefully into sections and use a winch to pull it off the house in such a way as to not damage the dome any further. But several folks were high up there on ladders or on our slippery dome in high winds. What heroes they all were! We are so grateful for all the help.

The tree punched a big hole in the side and top of our dome and did some damage to the cupola a the top and another section higher up also. I stayed inside and tried to deal with all the water coming into the house (fortunately it was on to vinyl flooring and not carpeting) and move furniture out of the way of the instant interior waterfalls. Several women friends came to help me deal with the inside of the house and that was great. Once the outside workers got a big tarp lashed on to damaged part, things quickly got a lot better inside the house. 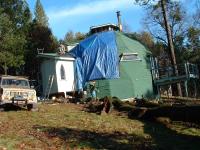 So we have spent the last couple of days (Yogananda’s birthday weekend, no less) working hard to clean up, to assess the damage, to take pictures for insurance purposes (we are insured through the Village, thank God!) and to start some of the actual repair work.

All this took place without electricity as we were without power for three days and during intermittent snow falls, which were fortunately not too heavy in our area. Friends came through with all sorts of food and repair work and continuing offers of aid. We have much hard work to do, perhaps months of it, to get it all repaired. Because of the gaping hole in the dome, we have to use more than the usual amounts of fire wood to keep warm, but other than that, we are able to eat, sleep, and carry on. We’ll be living in the middle of a construction project for as long as it takes, which you know is never fun, if you’ve ever had THAT experience yourself. It is sad on another level, because Sudarshan had recently finished re-shingling the whole dome pretty much by himself, and now a large section of has to be re-done. It’s very tricky doing this, because the roof comes all the way to the ground on our dome and the sides are steep and the angles are tricky. Ah, well!

All through it I felt very calm and blessed, so meditation does help “free one from dire fears and colossal sufferings” (smile). I feel that there was indeed a great amount of karma which was held at bay by divine forces, especially by Master himself. We are taught in our path that often when karma is coming to us, the gurus protect us. We still get the karma, but may be mitigated. Instead of breaking an arm, you might just get a scratch – that sort of thing. Sudarshan and I were about 2 feet from what would have been either sudden death or severe injury, if the tree hadn’t been nudged out of the way just a little and kept from falling on to the window near us instead of the roof/wall. 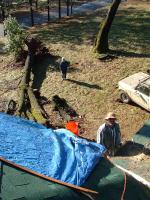 We had an engineer-architect friend helping us yesterday. He explained that a regular building, being hit by such a force, most likely would have been totally destroyed. But a geodesic dome, because of the way it is built, has a way of deflecting a blow and spreading it all over the structure instead of concentrating it at one place – making it super-strong. This is an amazing fact about geodesic domes, I think. Swami Kriyananda, our founder, really encouraged us to build domes in the early days of Ananda. Esthetically they are unique and the energy is excellent inside them. Practically, they present many unusual privacy challenges. But safety-wise, I now believe that they can’t be beat! Thanks Swamiji!

Another lesson driven home once again: Living in an intentional, spiritual community like Ananda Village has value beyond all measure. In times of trouble, sickness, disaster, whatever, your gurubais are there beside you, never questioning the cost to themselves personally, going the extra mile. And I am sure all our friends here understand that we would do our best to do the same for them in a situation like this one. Everyone in the world should live this way! I know it’s not possible in the world just now, but do I wish I could convince everybody otherwise. The blessings are amazing! As Swamiji’s song says (“Many Hands Make a Miracle”) “…when people laugh, and dance, and struggle as friends, then all their dreams achieve their ends.” So very, very true. Cooperative living, at its finest! Loving, divine friendship made manifest.