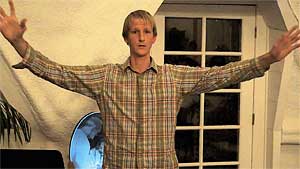 I’d like to take this opportunity to commend those who had the courage to be involved in the first Joymasters experiment. Nobody knew if our hypothesis would prove a fruitful one. We were sure it would bear some kind of fruit but we all hoped it wouldn’t be one of those strange, astringently bitter, hard seed filled whatchamacallits. Getting together to practice speaking about the teachings in front of an audience sounded like a beneficial idea that might be fun to try and so we had to make it happen.

In America, there is a club known as “Toastmasters” that trains people quite systematically in the art of public speaking. The name “Joymasters” was a natural Ananda adaptation to this and it should be noted that the general procedure of Toastmasters has also been duly adapted to fit the Ananda vibration.

As the day approached for the first satsang, the speakers discussed their feelings amongst themselves. Generally, folks were nervous and concerned that they were being used in a not so controlled experiment in the Crystal Hermitage dome laboratory. I played the role of the imposing scientist, assuring the subjects repeatedly, “Even if it is a complete disaster, the worst that will happen is that we will all grow!”

Some played content while resting in the shade of their partial detachment. Others were sweating it out, phoning me in the last hour before the satsang saying, “I don’t know if I’m ready to do this!”

“Of course you’re not. None of us are. That’s the whole point!” I replied. “This is an experiment and you are doing a service to us all by summoning your mightiest valor!”

I played it cool with a poker face, even though I was the first to speak and, as the host, the fear of utter awkwardness was also weighing heavily on my ego’s flimsy straw rooftop.

Thank God for meditation! And that tense and relax double breath quickie technique, my Lord what a savior in this time of intensity!

But what had we really to be afraid of? We are speaking about a path that we adore, in front of people we love and who love us and want us to succeed…then, why this fear?

That, for me, was the question I’d been attempting to answer for many years of my young adult life. Why is it that I feel physiologically attacked from within when it comes time to share my feelings with a group of people?

An answer came to me one evening about 5 years ago after I had disturbed (from my point of view) a large group of monks in an ashram by sharing something of a personal nature with a shaky lip and a heart pounding insecurity. I said to Divine Mother later that evening, “Why am I so scared of speaking in front of people? Please help me to understand!”

The answer that came to me after inwardly beseeching Her reply for the better part of 48 hours was baffling at first, but then it took on a deeply clarifying meaning… “You are judging them.”

“I am judging them? What does that have to do with it?” I began to wonder for a few moments… and then, Aha!!!

Since I have the tendency to be judgmental towards them when they speak, I am assuming that when I speak in front of them, the reverse is true. In other words, I am imposing my own fault on them and suffering as a result! Quite an intellectual revelation… but I was soon to find that, though I could understand why it was there, it was nevertheless still rubbing on me like a boogie board with no rash guard.

I knew that this teaching of Self-Realization was something I wanted to dedicate my life to sharing and so, naturally this public speaking complex was posing a huge obstacle. Not to mention I had to have some solid years of practice of the teaching in order to competently speak about its validity to anyone. Life at Ananda Village is generously providing these opportunities as well as a supportive environment where all who participate are constantly learning and growing together in God.

And so we come to the eve of September 2nd, 2013, carrying out our intended plan to have 6 devotees speak of what they appreciate most about the path. One idea, which I recall was suggested by Nayaswami Devi, was to have 1 or 2 guest ministers present in order to offer guidance and support afterwards. Jyotish and Devi agreed to be the first guest ministers, which for me was a great comfort because of their completely loving and encouraging natures. Then the rest of the audience was made up of loyally smiling Ananda citizens.

A prayer, a chant, and a 5 minute meditation to allow the speakers one last opportunity to invoke the grace of the masters and we were officially under way. Well, I won’t spoil it for you. You’ll have to watch and see for yourself.

What I can say is that this evening unfolded into a great blessing and this blessing certainly didn’t end when the satsang did. In these last couple months, there have been Joymasters satsangs in Ananda Palo Alto, Ananda Assisi, and groups forming in at least a couple of other communities. There have been 3 beautiful and uplifting satsangs now at Ananda Village and they will continue monthly. If you have any interest in speaking at one and will be at the Village in the first week of any month, please let me know.

Joymasters has been a wonderful way to come together with gurubhais to generate spiritual inspiration, to understand the teachings more deeply, to gain valuable experience speaking in front of an audience, and most importantly, to cultivate deeper love for God within ourselves and within one another. Hope to see you there!