It was 1994 and my husband, Krishna Das, and I were asked to go to Dallas, Texas and serve as ministers in our newest Ananda colony. Such a long way from Ananda Village in California! It would take 5 days of driving just to move our belongings there.

I was optimistic about this new role I was being asked to play. I’d had many jobs in the15 years I’d lived at Ananda. A few of them were semi-leadership roles but this would be the first time that I would be a main leader. I’d read Swami Kriyananda’s book, The Art of Supportive Leadership, and watched him and other leaders doing their jobs. Now it was time for me to put theory into practice.

I did suspect that this upcoming job would have its challenges, but I certainly had no inkling of how challenging the next couple of years would be. It’s amazing how different “theory” and “practice” can be!

The warm, sweet heart quality and easy generosity of the members in Dallas immediately drew us in. We had a wonderful core of people, although as devotees, they were all fairly new. They supported us wholeheartedly and many of them became our deep, life-long friends.

There were several others and one couple in particular, who, although we enjoyed their company very much, had strong opinions on how Ananda should be run. They wanted to teach classes based on currently popular books and didn’t see the need to stay focused on Paramhansa Yogananda’s teachings. They kept pressing us to allow them to teach these other classes at our church. The woman was very gregarious and pretty soon there was a whole faction of the congregation that was agreeing with them.

Although we were amenable to changing some of the outer details, we felt that making the changes they suggested would be a divergence from Ananda’s purpose as a teaching center. We tried our best to listen, and I routinely asked myself, “How would Swamiji respond to this situation?” Unfortunately, holding to what we thought was best was beginning to put us in the minority.

This variance went on for some time, with no resolution in sight. Being sensitive to the need for harmony, the situation was beginning to be very painful to us. The members were serving in all the ways we could think of: setting up for services; being greeters and ushers; organizing potlucks; giving Sunday service readings; helping in the office; playing harmonium and guitar for kirtans and services; singing in and directing the choir; leading yoga postures and teaching classes in the evenings. We were at a loss as to how to turn this situation around. At this point I was feeling a bit discouraged.

A turning point in the conflict

It was about this time that Swami Kriyananda came to visit. We were so glad to see him and could feel waves of divine love and joy washing over us. We were eager for his advice and counsel on all that we were doing. The next week ended up being one of the most profound learning experiences I’ve ever had. Through his clarity of insight and spiritual magnetism Swamiji helped us solve the difficulties in the most surprising and unexpected ways.

Here are a couple of examples of the masterful ways in which Swami worked with all of us. Krishna Das and I were having lunch with him and describing, in particular, this one couple. I told him of their desire to teach classes at the church based on teachings other than Yogananda’s and of the woman’s forceful nature. In his many years of working with people Swami had surely seen just about every type of person and situation possible.

So, after finishing my little narrative I sat back to await his thoughts, fully expecting him to say something like, “Yes, I know that type of person. Here’s what you do in this situation.” Instead, he was silent for a few moments and then said, very seriously, “I’ve never heard of this before. I’ll have to meditate on it.” What a lesson this was for me. He didn’t classify them and made no immediate judgments. Instead, he looked at this as a new and original situation. And, I was not going to get the quick, easy answer that I expected!

A new group of “Acting Ministers”

Swami did another amazing thing. He wanted to meet with members of the church, so we decided to have a dinner at our house and invited those we thought would derive the most benefit. Several of them were the ones who wanted Ananda to be run differently. Being with Swami, we reasoned, might bring them more in tune with our way of thinking.

Well, it was all going along nicely when suddenly Swamiji announced to the whole tableful of people, “I’d like to make you all “acting ministers.” You should have seen the shocked look on Krishna Das’ face. I’m sure mine mirrored his.

“Will you define that, sir?”

Thinking quickly, and to avoid what seemed to be imminent disaster, Krishna Das asked, “Will you define that, sir?” “No,” Swami said and smiled pleasantly. “I’d like them all to teach, to take Master’s teachings out to the world. I don’t want it to be limited by definition. You and Mantradevi have your hands full with classes and running the church. You can’t also be trying to take these teachings out. I’ve long thought about creating a group that would actively share this knowledge with others in the world, like business people and such. Who is better qualified than those who are out there with them?”

Oh no, I thought ruefully. Several of them are the very ones who want to decide on their own focus for Ananda. Does Swamiji really understand just how wide the gulf is?

Greater clarity within the group

After Swami left we went about the task of organizing this newly formed teaching group. One of our members, who had experience in public speaking, took on the task of arranging the meetings into a combination of brainstorming strategies and sessions on public speaking. Krishna Das and I attended but mostly just watched and gave our support.

This was the first step in developing greater clarity among our congregation of the true purpose of Ananda’s mission. Those who could not reconcile their views to this mission eventually left to pursue their own interests. In the end, only a few classes were actually taught in the workplaces, but the members of the group who stayed directed their energies toward helping the church in other ways. Many are still core members of the Ananda work in Dallas.

I marveled at how Swamiji completely understood the problem and how to resolve it. By drawing everyone in, and providing a unique path of action, people were able to discover the truth at their own pace. Whereas our thinking was limited to what we could offer within the boundaries of the church, Swami simply created a new arena that gave the group an opportunity to pursue their strong interest in teaching—with no confines.

Yet, by making them “Acting Ministers” the message was clear that it was Yogananda’s teachings they would be taking out to the world. This also broke the impasse and shifted the focus of the disagreement away from Krishna Das and me, bringing a more impersonal climate to the overall situation.

Swamiji taught me, in ways that I’ll never forget, how to creatively work with people’s strengths, to support the highest potential in others and to respect everyone’s right to learn in their own way. He showed me that the best solution may be found outside the perimeter of ordinary reasoning, and that one must think “originally” while at the same time never losing sight of the larger focus of Master’s mission.

Ultimately, Swamiji reminded me, on a deep level, of how “people are more important than things” and that divine friendship is a gift to be shared with all our brothers and sisters on the path.

About the Author
Nayaswami Mantradevi 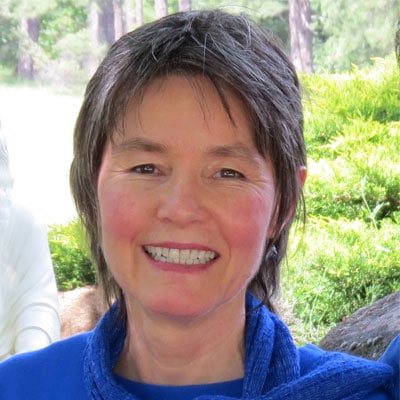 Nayaswami Mantradevi teaches with insight, clarity and joy, gained from over 40 years of meditating and sharing yoga philosophy. Her concern for others is one of her key qualities, along with an innate ability to explain spiritual principles and help you apply them to your life. She has served as a minister, teacher and co-director in several Ananda communities: Ananda Village, Palo Alto, Portland, San Francisco, Dallas, and Los Angeles.
Read more