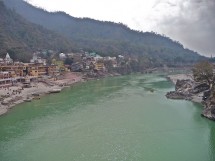 I am late for satsang with the revered woman saint, Mataji Vanamil Devi. I was unavoidably detained by an appointment with a highly respected vedic astrologer. But Divine Mother comes to my rescue, yet not without a playing a little joke on me. I had professed to a friend, only weeks before, that if I had to travel anywhere a motor cycle would not be my chosen mode of transport, and so, here I am found clinging around the middle of a young Indian man I had only met minutes before, riding the back of his motor scooter. And you know what? I thoroughly enjoyed the ride!
So, as fast as he could go, my gallant rescuer was tooting his horn to get me through the milling throng of tourists and locals alike. 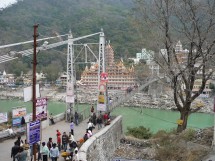 Where on earth would one find a female Nayaswami in her 50’s, on the back of a motor scooter, shooing people, cows and monkeys out of the way on a narrow bridge over the sacred River Ganges? Where would I, a woman alone, feel absolutely safe clutching this young Indian man for my very life, as my hair billowed behind me in the wind, and dressed as I was in Nayaswami blues? What a spectacle! But I was in Rishikesh, home of the Rishis, and the greatest Rishi of all, Shiva! 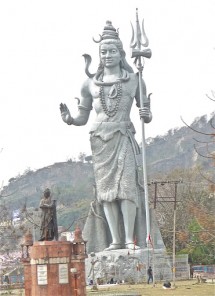 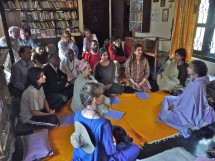 Oh, and the motor scooter ride was worth it, by the way, to be blessed, as I was, by such a saint. 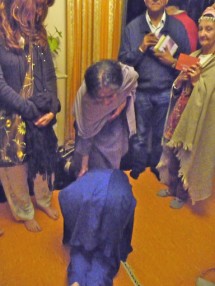 A blessing from Mataji

So how was it that I came to be in this sacred town? I booked a very well organized pilgrimage tour with Daya and Keshava Taylor, operating out of Ananda’s Gurgaon Centre.
I really do not know how I can write this blog without it being one big advertisement for this great pilgrimage service. The whole experience was filled with blessings from start to finish. The tour also managed to take in a day to Agra at the beginning. Seeing the Taj Mahal was thrilling, and a life ambition fulfilled. 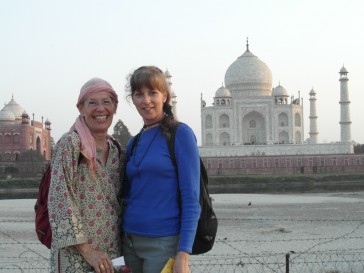 As for Rishikesh itself, I really do not know what I could call the highlight of the trip. I had heard that Rishikesh was full of deluded marujana sadhus, and Westerners. I did see some addicts, for sure, but not like I was expecting, and actually very few Westerners. I must have visited at a quiet period in the tourist calendar. But, just as it was, I was inspired from start to end!

Immersing myself in the Ganges brought such a surprise. I had no expectations of what this would be like. I had heard all the stories about Mother Ganga blessing all who immerse fully three times, but not taken it too seriously.

So when I walked into the very cold water, in this idyllic setting in the foothills of the Himalaya, I was not expecting the energy I received. A gentle and purifying electric current permeating my whole body, even though I was only yet in up to my waist. Vivified, I felt I had received a cleansing and a true blessing. 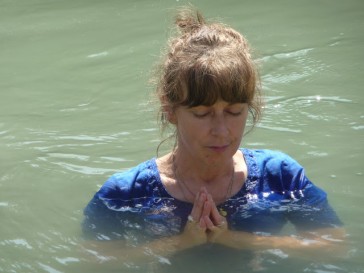 I, too, felt a profound peace as I prayed to Mother Ganga for the purification of all. 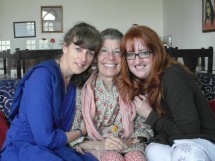 I was blessed also by the wonderful devotees who were with me on this tour, each at their own spiritual level, they all had a great and unique expression of their devotion.

Meditating together in sacred places of highly spiritually charged energy, such as the kutir of Swami Shivananda on the bank of the Ganges each morning, site of the evening Arati ceremony held on the opposite bank, a shrine holding the some of Lahiri Mahasaya’s ashes and Anandamayee Ma’s resting place, in Haridwar. 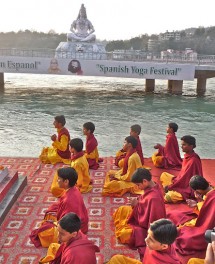 What can I say, Daya and Keshava, if you read this? Thank you, great souls, for this wonderful service you offer devotees such as I, who perhaps would not be as willing to take such a trip alone. Here’s to the memories and blessings we all shared, and to many more trips together.