Just after the end of World War II and a month before Easter, five young friends met on a street corner in Paris. For five years they had often been together in the air raid shelter below the street whose name translates as The-Cat-Who-Goes-Fishing. It was only natural that the children named themselves The Gang of The Cat-Who-Goes-Fishing. These young people had grown into a wisdom and compassion beyond their years: Charles, age ten, whose father had died in the war, was now man of his family, and cared devotedly for five-year-old Zezette, chronically ill from malnutrition; Remi and Louise, twelve-year-old twins, their mother lost in the war, had matured quickly, Remi to be leader of their little group, Louise to be mother of their orphaned family; Jules was nine; Paul was eight.

All the children loved little Zezette, and prayed to find a way to help her be well. “Eggs,” the doctor had said, “she needs eggs.” But there were no eggs to be had in the city. And in the country eggs could only be had by bartering something of real value—warm clothing, blankets, things no one had. Perhaps Louise, an accomplished knitter, could make a sweater to barter? But there was no yarn, and even if some could be found, how to pay for it? Her mind filled with Zezette’s suffering, her heart praying for a way forward, Louise, as she cleaned their home, looked closely at the ruined old sweater of their mother’s that she was using as a dust rag—threadbare, full of holes, filthy—but made of real wool.

And so the rescue mission began. Charles would go on as he always did—caring for Zezette, keeping her spirits up, doing what he could to find nourishing food for her. Louise soaked the dust rag in cold water till the water turned black, poured the water out, then soaked it again, and again, until finally the water stayed clear. To dry the rag, Remi found a spot in the one room that was warmed by the sun. Louise spent days picking the sweater apart till she had four big balls of yarn. Late into the night she knitted until finally the second sleeve, and the sweater itself, was complete.

But it was a sad, drab thing, all color worn away. Who would barter for it? As the friends stared disconsolately at Louise’s handiwork, a plan formed in Jules’s nine-year-old mind. Silently he slipped away. In his love for Zezette and desire to help the others, Jules found the courage to persuade the woman who ran the notions store to barter a package of dye in exchange for his standing hours in line to get her matches.

The sweater was now dark blue, but when held up to the light many thin places were evident, thin patches that would soon wear into holes. An idea came to Paul, the youngest. His mother saved tiny pieces of yarn, and in all colors. That evening, unasked, Paul set the table, later put the dishes away, even went to bed on time. His mother, drawing the story out of him, agreed to provide a handful of yarn pieces every day until the sweater was truly finished; Paul’s barter would be to keep on helping in the home or as long as Louise was embroidering. Thus it was that every thin place in the sweater was covered by a brightly colored flower or bird—the dark blue sweater was now background to a rainbow of color.

The final part of the mission fell to Remi, the oldest, a scout, and with his own bicycle. His father he persuaded to let him go—for Zezette, and because, as he argued, he was not like the children of before the war: He had delivered messages for the Resistance. The road to the country was pitted from air strikes; the Montmorency forest was dark and thick and alive with animals: deer springing across his path; owls hooting in the trees; bats whispering just past his head. Remi’s bicycle bumped its way along without light; fuel was too expensive to use if he could manage without. Finally he came to a small farm, dimly visible by the light of a sliver of moon. Wreckage was everywhere, but from one small building came a faint light.

In response to his timid knock, the door opened to reveal a young couple and their tiny one-room cabin, stuffed with all they could rescue from the bombing. Listening to Remi’s story—eggs for Zezette—the Bonnards felt the comradeship of those who have survived the war and now live grieving lost loved ones. Though their farm was in ruins, they still had one milking cow and a few chickens. What they had they placed on the table for the boy who was their guest, and much more, a piece of dark bread and a pitcher of milk. And when Remi devoured every morsel, they brought out a second piece of bread and refilled the pitcher with milk. 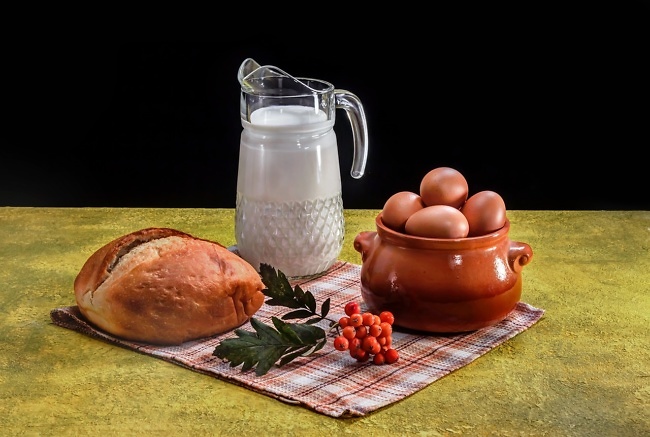 In the morning, when Remi was again invited to their table for bread and milk, he found there by his plate the sweater and two dozen eggs. “We are giving you these,” the Bonnards told him, “for Zezette. You see, our own little girl, Chlotilde, who died in the war, would have been Zezette’s age now. We too would like to be members of your Gang of The-Cat-Who-Goes-Fishing.” The sweater they returned to Remi, together with directions to a prosperous farm where he might barter it for far more than their straitened circumstances could allow. For their part, the Bonnards invited Remi to come every few weeks and another two dozen eggs would be waiting. “And may the good God bless you,” Remi called out as he pedaled away, “And send you another child.”

Remi left the prosperous farm laden with the fruits of his barter: potatoes, cornfield salad, apples, honey, butter, and a fat chicken. Holding the heavy bag of apples and potatoes in one hand, he steered over the rutted road with the other. It was just after sundown on Good Friday that he made it home. His father, learning the whole story, invited The Gang for an Easter feast. Even Zezette managed to come and received the two dozen eggs, the humble dust rag having been transformed by love and God’s grace into Easter eggs for God’s child.

A year later the five friends, together with Zezette (who was now well), gathered to read a letter from the Bonnards:

“Monsieur and Madame Bonnard have the joy of announcing the birth of their daughter, Chlotilde-Zezette-Charlotte-Louise-Mimi-Julia-Paulette Bonnard…”

Many hands make a miracle:
Let’s all join hands together!
Life on earth is so wonderful
When people laugh and dance and struggle as friends,
Then all their dreams achieve their ends.