It has been several years since I made that first trip from Los Angeles to Ananda Village, but the experience stands out in my memory for several reasons.

I still remember clearly the morning I stepped into the reception area of the Expanding Light Retreat. I don’t remember being ever greeted by strangers anywhere so lovingly, so warmly before. I was charmed from the very beginning!

Then I got a tour around the area and I can still feel the joy of my hostess as she took me around. I had never come across such a happy person – happy, apparently to simply show a guest around a resort…and I wondered. As it would turn out that was only the beginning; I would pause and wonder many times during that trip. 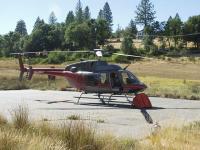 Helicopter landing near the Village green 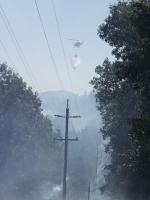 I was waiting for my room in the reception foyer when I thought I heard a helicopter outside. I couldn’t believe my ears. Helicopters belong in LA, not here! – I remember thinking to myself!

However when I peeked outside, I saw that the sun’s light had turned orange in the dark smoke that was curling out in the distance. Before I realized what was happening I, along with everyone else, was asked to get in their cars and leave the Expanding Light area – there was a fire! 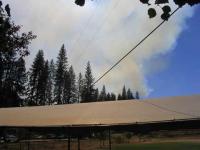 As I had flew into Sacramento and took a shuttle up to Ananda expecting nothing but an uneventful, peaceful week, all I had with me was a small carry-on. As I got into someone else’s car with my bag I was still in a state of shock and disbelief. I was whisked away from the hill top down to a meadow like area which I would later come to know as the Master’s Market. As I stepped out of the car, not knowing what to expect next, I found myself looking at a huge crowd of people. 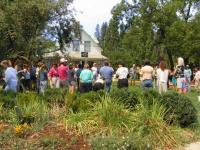 Someone was asking everyone to fall in a circle – she seemed very familiar – I felt I had seen her before. Again, as I was to find out, that was a feeling I would have many times that week at the Village. Everyone gathered around in a large circle.

I looked around to see happy, calm eyes of people chanting Aum. That resounding Aum awakened something in me and as I joined in with everyone else I felt so much at home, so much in place! 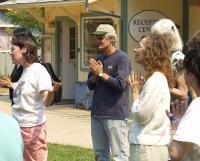 We had powerful prayers going on till the afternoon. I was amazed to see people so calm, so loving and joyful even in the midst of an ongoing fire. Again I remember thinking “These people have their houses on fire – literally! – What keeps them so peaceful, calm and joyful? What is the source of this courage and strength?”

I was, along with other retreat guests, asked if I would like to leave given it was uncertain when the fire would subside. While all the other guests left I wanted to stay back. Ananda had hooked me! The place and the people felt strangely familiar and there was no way I was leaving before finding out all about it! 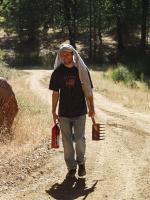 One of Ananda volunteer firefighters

As we continued to pray in the circle, we got word that the fire had been brought under control. The firefighter captain came down and congratulated us on our successful prayers. He said the wind was blowing the fire closer to the Expanding  Light when there was a sudden shift in the wind and the fire was driven away. 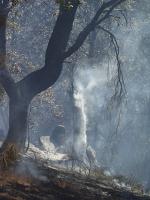 Later that day I was offered to stay with one of the residents at her house. I accompanied her to a community meeting in the evening. Everywhere I went I came across joyful, happy people. Their eyes mesmerized me with their warmth of love and depth of joy, seeming to pour from deep within. “What is this place? Are these people real?” I asked myself. I came across so many faces that seemed so familiar – how is that possible? 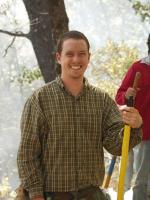 I attended Sunday Service the next morning. Again I had never experienced anything like that before! Words fail me to describe the wide range of emotions I felt that morning. Finally when everyone sang together during the Festival of lights I remember feeling “This is how heaven is, this is how heaven must feel!”

Little did I know I had stumbled across a place that would help me find my guru, awaken yearnings long buried under dusts of day-to-day familial life and launch me on an incredible journey of spiritual awakenings.

Peaceful village the day after the fire

Thank you, Swami Kriyananda! Thank you, Ananda! For being what you are – a beacon of Divine’s Mother love and light for God-thirsty, truth-seeking souls everywhere.

About the Author
Padma Haldar