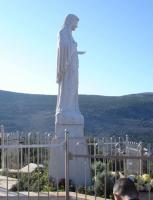 The statue of Madonna at Medjugorie

As many of you know, I went to Medjugorie recently. This little village is in Bosnia-Herzegovina. It is where the Madonna appeared to six children in 1981, and has been appearing to most of them ever since. I have always wanted to go to places where the Divine Mother aspect of God is especially manifested.

I went with Nandini, who had been there before and “knew the ropes,” and with Miriam, who for some years has been my nurse. I can’t imagine better companions for such a trip.

In going, was not interested in the intellectual or dogmatic aspects of the scene there. I know that Catholics think of Mary as having been only the mother of Jesus Christ.

At Medjugorie, however, the Madonna has repeatedly told the visionaries that all humanity are her children, and that She is above all sectarian differences, even between religion and religion. I ask, Before the birth of either Mary or Jesus, was there no Mother? Of course there was! And at Medjugorie She makes it very clear that that is who She really is.

I wore my Nayaswami robe throughout my stay there, and felt completely comfortable with it. Everywhere I went, people respected it without questions. It also helped me to get inside places from which others were excluded.

Vicka (pronounced Vitska) is perhaps the main visionary, though I’m not quite sure of the distinctions. She hasn’t been seeing people for many months — perhaps for three years — owing to great pains she is suffering in her spine.

Much of her time seems to be spent in Zagreb (where, incidentally, my father was being transferred from Bucharest when World War II broke out). We were fortunate to see her at her home on one day when she came back there. I think we were the only ones who got to see her in, maybe, months. And, as far as I know, millions go to Medjugorie every year.

We were fortunate to arrive during a very quiet time, for most of the pilgrims would be arriving for December 8th, the Festival of the Madonna, and, later, for Christmas.

I have to say that this visit to Vicka was the highlight of our visit. She spent quite a bit of time with us, was extremely loving. Her husband, Mario, asked me privately for a blessing, and both of them were an inspiration to be with.

I asked Vicka if she would ask the Divine Mother for me whether there was anything more I could do for Her in this life. I told her I’ve been serving Her for over sixty-one years, and have done nearly everything I can think of in this service. She promised to ask that question.

So far, I’ve had no outward answer from her, but I returned from Medjugorie with what I feel is Divine Mother’s answer: “Love me ever more deeply, in your heart.”

And sometimes, even more so since my visit there, I feel so much bliss in my heart that I find it difficult to bear! 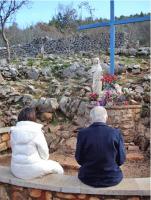 Meditating at the Blue Cross

Marjana (pronounced Maryana) had a “visitation” in her home on the second. I was allowed inside, despite the crowd, and sat hardly two yards from her. I had my eyes closed throughout, however, feeling great bliss. It wouldn’t really have mattered where they put me.

The next day (I think) she had a public meeting outside her home. Again, I was allowed in the courtyard, though almost everyone else had to stand outside. When she came out, she came straight over to me and shook my hand.

I found her extremely clear minded and intelligent — really, a joy to listen to. There was quite a bit of emphasis on everyone going to confession, to mass, fasting, and reciting the rosary every day.

Catholic stuff, beautiful in its own way, but things we translate into other terms. Confession, to us, means opening our hearts with complete honesty to God, and to one who we really feel can help us.

Mass, to us, means inner communion. The rosary was beautiful in its way, but all that outwardness I found a little distracting. When people recited, “Pray for us sinners,” I substituted the words, “Pray for us, who love You.” Why keep on affirming our sinfulness?!

When Marjana spoke of listening to the priests, she used the word pastors, which seemed to me deliberate, and more suitable.

I was extremely well impressed with her.

We also went to the home of a lady called Nancy, who has built what she calls an outward replica of St. Teresa of Avila’s “Interior Castle.” This lady also spoke beautifully, with deep inspiration, but sounded the note much too heavily (for my tastes) of submission to the priests. I couldn’t help remembering the words of St. Odo of Cluny, “The floors of hell are paved with the bald pates of clergymen”! 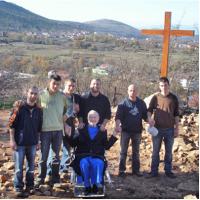 Nayaswami Kriyananda and the men from Cenacolo

We went to an institution, called the Cenacolo, which rescues drug addicts and the like. A very noble enterprise. And we also went to a place where music is composed and sung, some of it beautiful and inspiring.

I was taken up Apparition Hill in a chair by a group of young men from the Cenacolo. A wonderful experience. The way was so very rocky that even Miriam had a hard time coming down it.

The weather was mostly very rainy, windy, and cold. But even so, the trip was very inspiring.

Have I covered everything? Probably not, but I hope I’be given you at least a flavor of what was, really, a high point in my life. 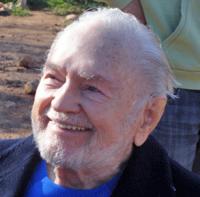