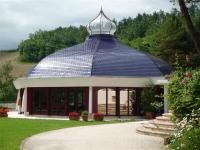 My husband, Michael, came out with the most profound statement the other day in the beautiful Ananda temple near Assisi, Italy, and he not being familiar with the teachings of yoga. He said, “You know what is blocking my path?….myself!”

Those who read a previous blog of mine may remember that I missed seeing Nayaswami Kriyananda, at the Ananda centre in Pune, India, by just 4 days. Swamiji hates to break an appointment and asked if I could perhaps visit him at the centre in Assisi in June when he would be there. I said that this would not be possible as we had financially stretched ourselves with the visit to India. Then I received correspondence from two members of his staff both asking the same thing. Again I declined. My Kriyacharia (kriya teacher) at Ananda Village asked me the same question, and so did many more as time went on. Each time my answer was negative.

Meanwhile I had asked Swamiji for a telephone interview, by way of a compromise which, he said in an email, he would gladly grant, but went on to say that wouldn’t it be much better if I could meet him in Assisi? Again, Assisi, Assisi, Assisi! Why is the same question being raised so often, and more than once by Swamiji himself? I looked to myself. “Who is it that is saying that a visit to Assisi is out of the question? Who is it that is blocking the flow of energy that is doing its best to steer me in a certain direction?” Ego… With all the limitations and fears that it thrives on!

In my realization I put out a superconscious plea. “Divine Mother, if it is your will that I go to meet Swamiji in Assisi, then please help me out here”. I went straight to my husband and asked him how he fancied a long weekend in Italy. He looked a little surprised as we were only a few weeks back from India, but asked me why. When I told him he said, with a sigh and a knowing look, “See how much it will cost”. Now when my husband says that, he means “Sure, why not?” He knew how much meeting Swamiji meant to me.

And so it came to pass that Michael and I have just shared the most fantastic weekend with Swamiji in the picturesque Assisi community. 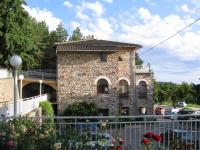 The people we met, the energy we shared… all priceless. 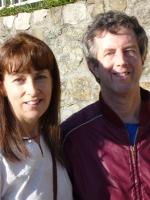 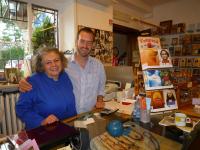 Swamiji himself carries such a high vibration and I am totally convinced of his saintly status. Both Michael and I are changed since our precious and most timely encounter with him. 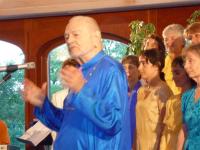 We shared many an intimate moment. Swamiji granted us a private interview, we heard him give class, listened to him sing at the evening concert and then watched him take Sunday Service. He even invited us to Sunday lunch at his table. 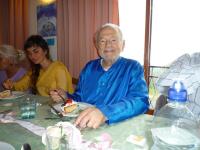 What blessings I would have missed if I had stayed in my comfort zone of limitation; if I had played into ego’s hands? What blessings would I, in my blindness, have deprived my husband of? The encounter with Swamiji has been a pivotal point in our lives and since our return home we are both moving in a newly inspired direction TOGETHER! Would this be happening if I had continued in my egoic delusion? I have learned a great lesson. Get my ‘self’ out of the way and all will unfold beautifully before me, just as it should. 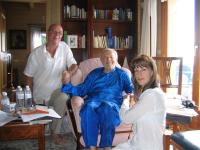 The final grace of the trip was an email from Swamiji shortly after my return home in which he gave me a spiritual name, long a tradition in Yoga. The new name is given to the guru in meditation, or the guru’s channel in this case, and is adopted as a means to break away from identification with the old ‘self’. He named me Maitreyi and said it meant ‘a wise woman’.

Thank you Swamiji for working Divine Mother’s magic, and may She continue to bless you too.

Joy to you all