It is said that, of all the males of bovine breeds, the dairy bulls are the meanest, as a result of their prolonged separation from their mates. And, of all the dairy bulls, the Guernseys are considered the worst—horns and shoulders, one might say, above the others.

At Ananda Village in the late 1970s, we kept a Guernsey bull for breeding purposes. He was called Nandi (after Lord Shiva’s servant and protector), and he lived in a pasture near our dairy at that time, just below a pond named after him: Nandi Pond.

He stayed in that pasture nearly always all by himself. He was a large bull, with a wide neck. Narada Agee told me, “I once saw Nandi in that pasture with a horse. Nandi stuck his neck under the horse and lifted the horse up off his feet. Ever since then, I’ve nurtured a healthy respect for Nandi.”

But when Prakash Van Cleave introduced me to Nandi, as we stood on the dirt road next to the wire fence that hemmed him in, he spoke lovingly of him. And when he called him, Nandi trotted over and Prakash caressed his nose. He explained to me that Nandi, who often bellowed in his pasture, was lonely. What he said made an impression on me. 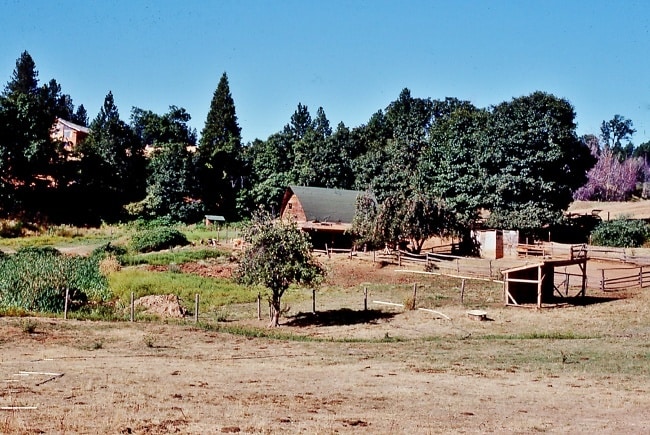 At that time I worked in the dairy with Nakula Cryer and others, helping to milk the cows and goats, feed and gather eggs from the chickens, and I ran the dairy kitchen where we bottled milk and made cheese, cottage cheese, yogurt, and kefir.

I used to walk along the dirt road next to Nandi’s pasture on my way up the hill to the Ayodhya monastery where I lived at that time. When I walked that long road and path to my tipi after work, I often used to sing to myself songs composed by Swami Kriyananda: “Walk Like a Man,” “There’s Joy in the Heavens,” “What Is Love?” and so on.

One day, as I walked by Nandi’s pasture and saw him there bellowing, I thought about what Prakash had told me, of Nandi’s loneliness, and I thought I’d try singing to Nandi.

I did so, and he came up to me at the fence and seemed to enjoy my singing.

So I got into the habit of singing to him on a daily basis, and he used to stick his great neck through the wire fence so he could lick my arm with his rough tongue. Even Nandi’s tongue was strong, as his licking moved my arm and shoulder up and down.

One late afternoon—it happened to be Halloween—I was walking up from Ananda Village on the road to the dairy for evening chores and milking when I was stopped in mid-stride by an arresting sight. It was a 50-pound hay bale soaring 20 feet into the air.

Nandi had broken out of his pasture!

I hurried up and saw that Nakula and others were trying to coax Nandi back into the pasture, past the gate he had broken but he would have none of it.

He was having a grand old time playing with the hay bales and singing a triumphant bellowing Nandi song in his deep voice.

Nothing was working to get Nandi back into his pasture. But then I had an idea.

I told Nakula how I’d been singing to Nandi, and that he seemed to like the singing. “Maybe,” I said, “if I stand in his pasture and sing to him, he will come in.”

Nakula was willing to try it, so I walked into the entrance to Nandi’s pasture, next to his feeding trough, and began to sing. 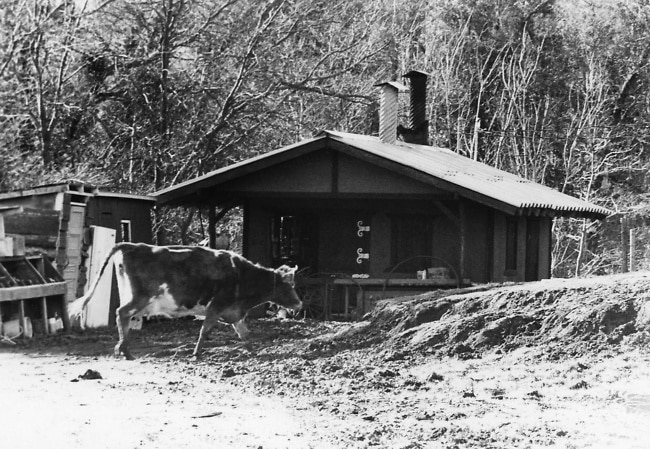 Within moments, Nandi came trotting in. Nakula and the others quickly filled his trough with grain and hay and as Nandi ate, worked quickly to repair the fence. In a short time, they had done so.

Nandi came up and pushed against the gate with his forehead in a leisurely manner, but we could see that the fire had gone out of him.

Music really is a universal language, and it communicates across species. Swami Kriyananda’s music especially carries a message of peace and love.

And, more than 40 years ago, it carried that message to the heart of one of God’s more unlikely creatures—a large and tough Guernsey bull.

Richard (Dayanand) Salva is a longtime member of Ananda. He is also the author of Soul Journey from Lincoln to Lindbergh; Walking with William of Normandy: A Paramhansa Yogananda Pilgrimage Guide; Blessed Lanfranc: The Past Life of Swami Sri Yukteswar, Guru of Paramhansa Yogananda; The Yoga of Abraham Lincoln; and Stories of Swamiji: Experiences with Swami Kriyananda, a Great Modern Saint and Direct Disciple of Paramhansa Yogananda.