Generations ago, when Naresh’s father passed away, all the relatives gathered at his house for the funeral rites. As Naresh was performing the ceremony, a dog strayed into the house. Someone quickly caught the dog and put it outside. After a short time, the dog wandered in again, and was again put outside. When the dog came in a third time, Naresh took it outside and tied it to a post so it would not disturb the ceremony again. Naresh’s five-year-old son, Sajiv, saw this.

Decades later, Naresh passed away, and Sajiv was to perform the ceremony. The only other funeral he had attended was that of his grandfather, and he remembered that his father had tied a dog to a post outside the house. Sajiv thought that must be a part of the ceremony, so he scoured the neighborhood until he found a stray dog, brought it home, tied it to a post outside, and performed the ceremony. Sajiv’s five-year-old son, Virat, saw this.

Many years later, when Sajiv died and Virat was to conduct the rites, what do think Virat did? Right, he tied a dog to a post. And so it was ever after in that family: Whenever there was a funeral, a dog was tied to a post outside the house. It became known as the Sacred Dog.

In practicing Paramhansa Yogananda’s Energization Exercises over time, it’s common for some personal—often unintentional—variations to creep into one’s practice. That’s understandable, and not necessarily wrong. After all, Swami Kriyananda has said that he never saw Paramhansa Yogananda do Energization exactly the same way twice. However, if we teach a personal variation to others, they will think that’s the proper technique.

Have you seen examples of this? Perhaps a roomful of people affirming, “I’m awake and ready!” during the Walking in Place exercise? Or Four-Part Arm Recharging with a double breath on every movement? (That’s how many of us were taught.) Neither variation is a big deal, but neither is it the exercise as Yoganandaji taught it.

Such insignificant steps away from the core practice can easily become “sacred dogs” of Energization, and the effect can grow over generations as students teach their own variations on our variations, their students introduce variations on those variations, and so on. Eventually the practice can become unrecognizable as Yoganandaji’s system. (I shudder to think what sacred dogs I may have unintentionally created over the years.)

This happens with virtually every yoga technique. Perhaps that’s why, a short time before his passing, Yoganandaji assembled a small group of disciples—including Swami Kriyananda—and told them how he wanted Energization to be taught. Recently some long-time Ananda ministers decided to re-emphasize this original practice to free, with Swamiji’s guidance, the sacred dogs of Energization. The result has been, not significant changes, but helpful clarifications that will appear in the next edition of Lessons in Meditation, later in a new Energization booklet and poster, and perhaps in a new Energization video.

Here, I’d like to point out a few notable ones. I’ve numbered the exercises as in the current Energization booklet and added comments in italics.

Double breathe on these exercises 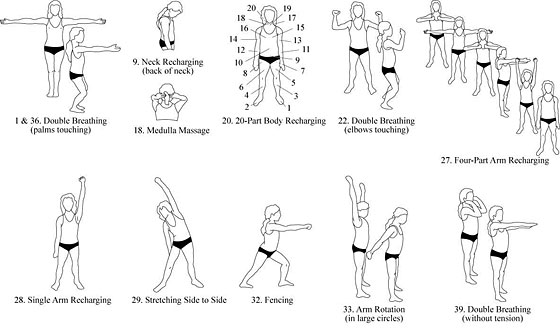 Double breathing is optional
for these exercises

You can choose whether to double breathe on any or all of the three exercises at right. If you use a double breath, then double inhale as you pull imaginary weights toward the head, and double exhale as you push those weights away from the head.

11. Spinal Recharging (a.k.a. Lower Back Adjustment)

Stand with your feet apart, legs straight. Twist your upper body, shoulders, and arms in one direction while you twist your hips and lower body slightly in the opposite direction (a quick yet smooth motion). Your feet should remain stationary, your elbows slightly bent, your fists positioned about hip level, and head pointed forward.

[The movement is more in the shoulders than in the hips. Don’t just swing the elbows—bring the shoulders all the way around in front as you twist.]

Stand with your feet comfortably apart and your hands at your waist. Bend forward at the hips and arch your back slightly. With your hips stationary, and keeping the arch in your back (with low tension in your lower back), rotate your trunk in small circles. Three times in one direction, then repeat three in the other, relaxing momentarily in between. [Keep the arch throughout. Don’t let your spine round or even straighten as you circle forward.]

15. Upper Spinal Twisting (with arms from side to side)

Stand with your feet apart, arms straight out in front of you at shoulder height, with the fists facing each other. Keeping your hips stationary, twist your upper body and arms from side to side. Hold tension in your arms as you twist; release it at the end of your twist. Keep your leading arm straight and allow the trailing arm to bend at the elbow. Follow your hands with your eyes and head. Relax forward to the initial position, then repeat to the other side. Do this three times in each direction, alternating sides.

[Tense back, then relax forward.]

Phase 3) Tense the 20 body parts, holding the tension. Repeat the exercise, this time maintaining the tension at a medium level in each part, as you slowly inhale. When the entire body is tense, vibrate it briefly and strongly, and then …

Phase 4) Relax each muscle individually in the reverse order as you slowly exhale. Begin the relaxation phase by bringing the chin to the chest and thus relaxing all four parts of the neck.

Phase 5) With the chin still on the chest, double inhale and gradually tense, and vibrate the whole body, and then gradually relax, with a double exhalation.

[There is no double breath in either Phase 3 or Phase 4. Phase 5 will be completely new to most of you; it was to me.] 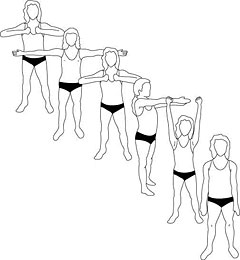 Begin with your arms at your sides. Then bring your fists to chest level. Tense your arms and in a continuous motion push the fists out to the side. Then pull them back to the chest and push the arms out to the front. Then return them to the chest and sweep them up above your head, rising up on your toes as you reach full extension. End by coming down off your toes and relaxing the arms, first to your chest and then lowering your hands to your sides. The arms should be tensed throughout these movements, but relaxed momentarily at the points where they are fully extended and when the fists touch the chest. The breathing is as follows: Inhale as you extend the arms from the chest outward to the sides and back to the chest. Exhale with the movement pushing forward and coming back to the chest. Double inhale as you extend the arms above your head. Finally, double exhale as you relax them down to the waist.

[This is not a change, but it’s worth emphasizing that the first two breath movements—inhaling to the sides, exhaling to the front—are single breaths, not double breaths. Also, there is tension on every movement except when you relax your arms down at the end of each cycle.]

Start with both fists at your chest. Double exhale as you step your left foot forward and thrust your right arm forward, tensing the entire right side of your body (as though closing a heavy door). Don’t lean forward as you thrust but stay centered over the middle of your body. Double inhale as you step back and relax into the initial position. Repeat to the other side.

Do each side three times, alternating. (Make sure you are extending the opposite arm and leg.)

[Remember to tense not just the forward-thrusting arm, but that entire side of the body.]

With elbows bent and hands in a relaxed fist position facing forward, draw your hands towards your upper chest and shoulder area. Close your eyes and focus your attention at the point between the eyebrows. Softly double exhale as you extend your arms and hands in front, and hold them there. Enjoy the pause between breaths. Softly double inhale as you bring your hands back to your chest. Enjoy that pause as well. Feel relaxed, peaceful, and energized. Repeat 6–10 times.

[Hands start from and return to the chest. There’s no affirmation.]

As you can see, Energization has not been radically changed by these refinements. Still, I think you’ll feel some nice improvements if you’ve been hanging out—knowingly or unknowingly—with any sacred dogs. Why not untie them and let them go, both for your sake and the sake of your students?

This article was written for the Ananda Yoga® Teacher Association newsletter.

Learn more, or find a certified Ananda Yoga® teacher near you.

About the Author
Nayaswami Gyandev