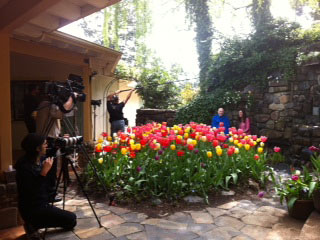 Brahmacharini Narayani has been travelling with Swami Kriyananda for the past several years through all our Ananda Communities. She has become one of his personal staff.

Swami Kriyananda’s health has in general been doing very well, and his spirit is always soaring in divine joy.

As you may know from having seen the pictures, we have been enjoying immensely the beauty of the 9,000 tulips planted on the Crystal Hermitage gardens. Many people from outside came to see it: around 3,000 people in the last three weeks. Everyone who came couldn’t contain the “uplifting and opening” of their hearts. Jivada and Netri have been the “garden avatars” of the Hermitage and around. They really did an extraordinary job.

Swamiji said, “I’ve been in one of the most beautiful gardens in Holland and in Kashmir, India, but not one of them is as beautiful as ours.” (Truly, it is heavenly beauty on earth!)

Two days ago, a family came very early in the morning to take some photos. The man told Swamiji, “Thank you very much for letting us be here and take these family pictures. This garden is so beautiful.” Swamiji’s reply was, “There is no point to have such a beautiful garden if you can not share it with others.”

Watching Swamiji serving his Guru explains perfectly the concept that Yogananda brought of God as “ever-new.”

After he had completed a biography of Yogananda in just three weeks, he started right away filming the movie The Disciple. Nandini, Shivani, Ted, and the filming crew came to film many aspects of Ananda Village and record some interviews with Swamiji and the Hermitage staff, and film his house and gardens. It was lots of fun and everyone who was involved (the camera crew) were completely transformed by the experience!

As you may know, Swamiji has been giving Thursday satsangs, gave a talk for Easter service, and now he has started to record the audiobook of Paramhansa Yogananda: A Biography with Personal Reminiscences. 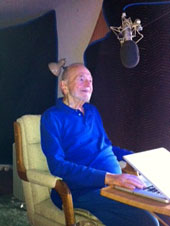 Recording the biography of Paramhansa Yogananda

He is already two-thirds of the way through, but with more chapters still needing to be recorded. Even though he has been tired, somehow his voice sounds extremely resonant and very powerful. He is even acting while he reads, which makes Yogananda more alive than ever. Swamiji says he “remembers” exactly the tone of voice in which Yogananda told Swami most of the stories that appear in this biography.

In an interview he had recently, someone asked him: “What do you feel proud of?” Swamiji replied, “I don’t feel proud of anything, because I don’t feel that I’ve done anything.” But then he went on and said, “Well, the only thing I could be proud of would be for being a disciple of Yogananda… But still, I’m not even proud of that, since I have the feeling that I don’t exist.”

Thinking of these words from Swamiji, suddenly there came to my mind what Yogananda used to say: “I killed Yogananda long ago; no one dwells in this body now but God.” Well, whatever Swamiji has “killed himself” (his self-definition) long ago or not, it is not my place to say, but as Yogananda himself told Swamiji, “You will never fall due to ego.”

Dear divine friends, let’s keep Swamiji in our prayers, so that he can continue to serve Master through all this summer, all over Italy and Europe with a “radiant health and vitality” and with always an “ever-new-joy.”

Many blessings to you all and thank you for your loving friendship in God!

From the beauty of Ananda Village,
Brahmacharini Narayani

About the Author
Tyagini Narayani 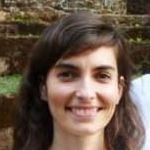