Last month saw the first anniversary of Ananda Meditation Group, Isle of Man. It was an event that I knew in my heart would come to pass; however the odds against the group’s very survival have been great.

Paramahansa Yogananda taught that nothing is sent to us that we cannot handle, and it is something I often bring to mind in times of seeming adversity. Firstly we had to find a suitable venue for the group, which was growing rapidly and wasn’t as straight forward as we thought. That was because I was trying to arrange it myself, rather than waiting for Divine Mother’s intervention. But then, relaxing into the flow once again, the way opened and we were kindly offered the use off the hospital chapel where I work.

Inevitably perhaps, the initial enthusiasm of some of the members began to wane and some we lost altogether. People come and people go, but all will have been touched by Guru’s vibration and received what they were capable of receiving, according to their karma and level of spiritual development. It has been a wonderful lesson in practicing non attachment to the fruit of our labours. It could have been all too easy to take rejection as a personal affront.

As the group began to establish itself some members could not deal with the meetings gearing more toward devotion to our line of gurus. That was fine and their decision to make, but I wasn’t prepared to compromise on the true purpose of an Ananda Meditation Group just to put more ’bottoms on seats’. Contrastingly, I witnessed 2 sincere members undergo great emotional healing of long standing problems, both on a profound level and after only a few weeks of meditation.

So our numbers are few, and not surprising on a small island. We do have, what I call, ‘satellite’ members who either live too far away, or cannot get to our meetings for various reasons, who like to stay connected by receiving the Group News letter each week. I am always available for advice to these members who strive to build an effective meditation practice on their own. The main Ananda website offers great support for those who want to deepen their practice, whether struggling alone or in a group, and now even offers ‘virtual’ webinars.

Divine Mother continued to play Her hand as circumstances then led to my being taken away from the Island and not being able to lead the group some weeks. I was away on the UK mainland frequently (and still am) to attend to the needs of my sister who is very sick, but my conscience against letting the group and gurus down was appeased knowing the group was in the safe hands of a sincere devotee, or so I thought until she badly broke her leg shortly after I had received the news of my sister’s illness. Rendered immobile for a good while, we moved the meditation venue to her home so she could still attend.

Not to be deterred, we strove to maintain a steady stream of energy flowing through the group, even if it meant only one person keeping the flow moving by meditating alone some weeks. We have the faith that God is taking care of everything and that, like all new ventures on The Path, we are all being tested. The group itself is being tested. 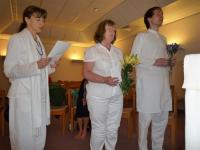 And so it was such a joy to be able to see the group’s first anniversary; hanging in there against all odds. And what better way to celebrate than with our first Discipleship Ceremony. 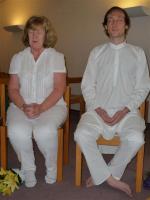 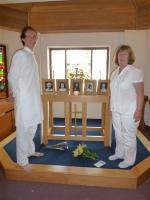 Son-in law, Ben and dear friend, Liz both took their vow in view of progressing to Kriya initiation next year at an Ananda centre. 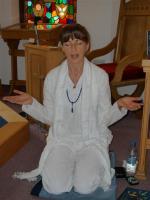 The energy of our guru’s was tangible throughout the ceremony. As we chanted ‘Jai Guru’, the very ether was supercharged with cosmic energy. I knew that God was smiling upon us this day, as He has been throughout all the karmic trials we, individually and as a group, are working our way through. He has never left our hearts and is ever more strongly present as we emerge from our trials out the other side, unscathed, strengthened and ever more determined to put our guru’s teachings into practice. Jai Guru!