In Part 1 of this article Nicole discussed how to handle three “prenatal situations” that you might encounter in your teaching: (1) a new, pregnant student drops into your general yoga class, (2) a pregnant student and her pregnant friends ask you to teach a prenatal yoga class, and (3) an advanced student of yours becomes pregnant. We’ll pick up by repeating her last few comments pertaining to scenario 3:

Even for an advanced practitioner with no complications, a practice will definitely need to be modified. However, the degree of modification, as well as what is appropriate even to attempt, will necessarily be determined on a case-by-case basis. And even that needs to be looked at on a day-to-day basis.

Obviously, then, I cannot give you exact parameters that will enable you to handle every instance of Situation 3. However, the more knowledge you and your student have, the more you will be able to make good choices together.

What I can give you, however, is a real-life example of what one teacher’s prenatal practice looked like. My goal is to demonstrate the range of possibilities in a healthy prenatal practice. This is important, because it’s easy to get so caught up in all of the cautions and potential problems that we can become fearful and contractive, and that is definitely not what yoga is about!

A Case Study: Me

She happens to be me, and I preface the description with this caveat: I have never taught nor even considered teaching most of the advanced postures that I practiced to other prenatal students—not even those with experience. Then why do I include some of them here? It’s to demonstrate the range of possibilities in a healthy prenatal practice. We can all get so caught up in all of the cautions and potential problems that we can become fearful and contractive, and that is definitely not what yoga is about! I hope the following will not be a template for prenatal yoga practice, but instead be an inspiration for a healthy, expansive, and safe practice.

Chakrasana had been a very important posture for me in my practice for a long time before my first pregnancy, as it alleviated the chronic upper back pain I had been experiencing for years. This made it important for me to continue with this asana for as long as was possible during my pregnancy. I was fortunate to be able to practice it throughout the entire pregnancy. I was able to do this because (a) I was quite flexible to begin with, (b) I had a dance background, so I had a very good sense of balance, (c) I have always been quite strong physically, (d) I experienced no discomfort in doing it, and (e) it just felt right. The accompanying photos were taken ten days before my son’s birth. 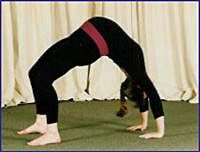 Before becoming pregnant, I was able to walk my hands to my feet in Chakrasana. As the baby became bigger and stretched my body and added weight, I adjusted the position by bringing my hands and feet farther apart from each other (see photo below).

Many women who have regularly practiced Chakrasana before becoming pregnant may find that they need to stop practicing this asana at some point during their pregnancy. If the stretch is too much, the added weight too heavy, the stance widening too far to be stable—or if it just doesn’t feel right for any reason—then one should stop practicing Chakrasana for the remainder of the pregnancy.

It is all relative. Whether an advanced asana such a onelegged Chakrasana (see photo next page) is appropriate or not depends on the woman’s yoga practice before becoming pregnant as well as on the status of her current pregnancy. The vast majority of women would not and should not be doing this asana while pregnant. It would not be appropriate to teach it in a prenatal class. However, it may be appropriate for a few individuals’ personal practice. This is true for many of the more-advanced asanas.

Before becoming pregnant, I would practice this asana additionally with either the opposite or same arm extended into the air. At some point during the pregnancy, I chose not to continue to practice those variations, due to balance challenges and the potential risk of falling. I remained comfortable and steady with the variation pictured.

If a woman has not been regularly practicing Chakrasana with ease before her pregnancy, she should not practice it at all during her pregnancy. The risk of straining or pulling a muscle, or coming out of the asana without adequate control, is too great.

Relaxin and the Hips

Upon hearing of the loosening effects of the pregnancy hormone relaxin, which is present during pregnancy in up to ten times its normal amount, many women look forward to more limber bodies, reaching toes that were previously elusive, bending into new shapes and squatting effortlessly. Alas, these women are mostly disappointed.

For me, an asana like Hanumanasana (see photo below) felt just as intense as always. I had one student (a limber dancer), who waxed poetic about how easy and wonderful positions like Hanumanasana were during her pregnancy. I think her experience was more the exception than the rule.

The loosening effects appear to me to be more in the joints themselves than in the muscles. From my experience, the muscles are minimally if at all affected. Relaxin softens the ligaments in the pubic area to facilitate enlargement of the birth canal. That’s why asanas in which muscle length is at the fore won’t really change that much when relaxin is present. (Note: Ligaments elsewhere in the body are also softened, and relaxin has other effects that are not musculoskeletal, e.g., softening the cervix, and promoting the formation of new blood vessels.)

Joints throughout the body become looser and thus less stable. The reduction in stability can make it easier to loose control and go too far in an asana and cause an injury. A woman who was already loose-jointed before pregnancy must especially take precautions not to injure her joints. Asanas to strengthen the hip area will be particularly good as well as certain modifications of some asanas. (See “Hip Strengtheners” on page 9.)

Most pregnant yoga students absolutely love restorative yoga positions. Oddly enough, these were the ones that I had to give up! The relaxation in most prenatal restorative positions would put my sacroiliac (SI) joint out of commission. I would come out of these poses with a stabbing pain at one of the SI joints with every step that I would take. Fortunately, it would go back into place fairly soon on its own. Though I craved practicing the restoratives, I had to give them up during both of my pregnancies. I have come across only one other student whose body reacted in the same way.

You should be aware that there are some controversial issues in prenatal yoga. And unless some substantial research is done (don’t count on anything anytime soon), they will most likely remain controversial. Inversions, twists, and lying supine are among them. A thorough look at all of the controversies would be another article all together. For now I will mention my viewpoints on a few of them.

As far as inversions are concerned, everyone (I think) would agree that during the last six weeks of a pregnancy full inversions (i.e., poses in which the pelvis is fully inverted) and in some cases partial inversions should not be practiced at all. At this time the baby is beginning to settle into position for birth. The downward pull of gravity at this time plays an important role in properly positioning the baby for birth. (However, if the baby is in a breech position— i.e., the head is not down—then supported inversions may actually be advised by the health care practitioner, in hopes of shifting the baby into the proper position.) Additionally there is the obvious danger of falling out of an inversion and the potential of injury to the mother and/or the baby. Wall support and spotting by a teacher can help to alleviate this.

However, some people recommend against inversions anytime during pregnancy. Inversions such as Shoulderstand and Headstand were not an important part of my yoga practice at the times that I was pregnant, so I did not practice them. I did occasionally demonstrate them briefly in the non-prenatal classes that I was teaching while I was pregnant, but I never teach the classical inversions in a prenatal class. However, I do teach Legs-Up-the-Wall Pose in a few different supported variations (see photo, page 9). 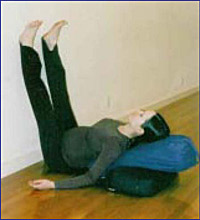 During the last six weeks of pregnancy, as mentioned before, I do not teach inversions that fully invert the pelvis, and in the last few weeks I avoid teaching even partial inversions of the pelvis in forward bends, etc.

I believe that twisting, as long as the spine and the abdomen are not being compressed, can be healthy to practice. The twists can relieve back tension as well as help stimulate digestion, which tends to be sluggish during pregnancy.

Lying on one’s back for short periods of time in a yoga class is safe during pregnancy. If a woman has circulation problems in that position, then of course it should be avoided. I give women the option of lying on their sides or their backs for the short rests between asanas. For deep relaxation, I have my prenatal students lie on their left sides (to minimize pressure on the vena cava), or give them the option of resting in a restorative asana, such as the Princess Pose (below).

Pregnancy is a wonderful time. It can be a doorway to positive spiritual transformation, not only for the mother, but for the father as well. Ananda Yoga is naturally suited to a prenatal practice. For one thing, the inward focus helps to facilitate a positive transformation into motherhood. For another, the affirmations become tools for working positively with the challenges of pregnancy, labor, delivery, postpartum, and motherhood—plus everyone really likes the affirmations and my students do tell me they use them during labor. Third, the pacing of the postures is conducive to a safe practice. And fourth, the meditative aspect is also appealing and helpful to pregnant women, who will appreciate it if you offer meditation at the end of your class as well.

As yoga teachers we want to foster and nurture the physical, mental, emotional and spiritual health of the pregnant student. We must keep in mind that, just as there is much to be joyful about pregnancy, there are many concerns and fears as well. As with most fears, the more we educate ourselves, the more we can rid ourselves and others of fear. The practice of yoga is ideally suited to centering and calming the expectant mother. As yoga teachers, we can help to facilitate this. Diaphragmatic yogic breathing and the affirmations are particularly powerful. In fact, the Ananda Yoga affirmations seem to be designed for prenatal yoga! In another article I plan to share with you just how effective they are for prenatal yoga.

So, how ready are you for the good news about prenatal yoga? I hope your answer is—or will be soon—something like the answer that one of my daughter’s (Raquel’s) friends gave to Raquel (though it was an answer to an entirely different question):

Positive Pregnancy Fitness, Sylvia Klein Olkin (When I was first
learning about prenatal yoga, I would keep this book in
the classroom and refer to it on the spot with my prenatal
students.)

About the Author
Nicole DeAvilla