“What I give to others I give not away, for in my larger reality it remains ever mine.  I am happy in the happiness of all!”

(Affirmations for Self-Healing by Swami Kriyananda)

In the book How to Be Happy All the Time by Paramhansa Yogananda, he tells a story: “A few years ago, I had a fine musical instrument, an esraj from India. I loved to play devotional music on it. But a visitor one day admired it. Unhesitatingly I gave it to him. Years later someone asked me, ‘Weren’t you just a little sorry?’ ‘Never for a moment!’ I replied. Sharing one’s happiness with others only expands one’s own happiness.”

We reap what we sow and whatever we give others, physically, mentally, emotionally, or spiritually, will come back to us from surprising sources in unexpected ways. We can access that flow of Grace when we expand our consciousness to embrace all of humanity, and when we learn to share what we have with all. Because we are all children of the same Mother, Father, God.

Swami Kriyananda wrote: “Sharing is the doorway through which the soul escapes the prison of self-preoccupation. It is one of the clearest paths to God.” The most precious gift we can model and share with others is our love and our uplifted consciousness. These will spread light and love throughout the world.

With willing hearts and minds, let us share the love of God with compassion, understanding, tolerance, and generosity.

(from “Letters to Truth Seekers” by Swami Kriyananda) 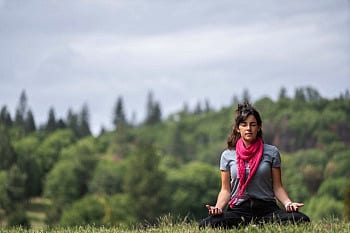 A devotee wrote: “When I first became aware that people were attracted to me and sought my advice I was greatly alarmed. I am terrified of being called a teacher.”

What other people call you is of secondary importance. The really important thing is what you call yourself.

Please just consider what it really means to teach. To most people, teaching means telling others who don’t know, things they ought to know. It implies a sense of obligation for the right conduct of other people’s affairs. It implies also a sense of superiority to anyone that one teaches.

Now, when a carpenter makes a table on commission he may do so in the spirit of, “High time Mrs. Brown had something decent in her house for a change. All that junk she keeps! No taste, that’s her problem.” But if he works in this spirit there will be no joy in his work, no joy in doing something beautiful for Mrs. Brown, no real sense of service—no joy even in making a good table, since it is a person with no taste who has shown a preference for his work! How obviously better it would be for him to make the table as a humble offering of such talents as he possesses, for the enjoyment of Mrs. Brown if she chooses to keep it. And how foolish of him to think that her life must be commandeered by a mere piece of carpentry!

That is what teaching should mean—not telling people what they should do or know, but offering the fruits of one’s own living in the humble hope that what one says will in some way prove useful, and that it will find a place somewhere in their lives. People don’t owe it to a teacher to take his advice. Rather, they do him a favor if they find his advice acceptable, for in so doing they give greater meaning also to his life.

In India, when people touch my feet (a traditional gesture of respect for a teacher), and sometimes in this country when people follow the Indian custom, I feel they are blessing me, not I them.

In this way teaching others becomes a joyous sharing with them, a reciprocal act in which one receives at least as much as one gives, and feels privileged for the chance to be of useful service to others, rather than somehow demeaned by the necessity of talking to fools.

See God, not yourself, as the Doer. Then concentrate on the needs of those who ask your advice, not on your own need to give it! Don’t seek people to advise, but if they come to you of their own accord, don’t send them away. This world is so full of blindness and suffering. Though you may not yet have found wisdom yourself, the very fact that you have found some answers makes it worthwhile to share your discoveries, if only because your friends will otherwise feel that you have betrayed their trusting expectations.

If a starving person comes to your door, will you send him away hungry and empty-handed?

Swami Kriyananda, From Letters to Truth Seekers, 1973 (Currently out of print).

Concentrate on the Light

My Journey of Sharing 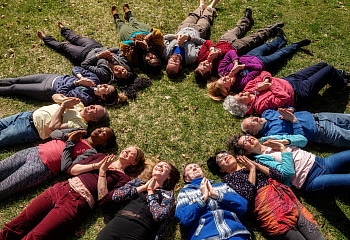 As I reflect on the tapestry of my life, one of the brightest threads woven throughout has been the love of learning and sharing with others what I have learned. Whenever I have found something I love, something I’ve found useful or beneficial, I’ve felt an innate urge to share it with others. And I’ve been blessed with the opportunity to share a number of things during my lifetime.

I grew up by the ocean, and I learned to swim by the age of two or three. I belonged to a local swimming club, and when I was seven years old I was trained as a substitute teacher for beginning swimmers. It was very rewarding to see the kids becoming more confident and losing their fears.

I started riding lessons when I was seven. At that age I lived and breathed horses. When I was nine, the owner of the stables asked me to teach beginning riders. These were mainly young kids as passionate as I was about horses and riding. My love of horses continued. Starting at the age of sixteen, for two years I worked seasonal jobs with horses and taught adults to ride. But when I was eighteen I cracked my coccyx and had to give up riding for an extended period.

In my business career I worked my way up the corporate ladder to head a national sales training department, and later, a national management training department. Even though I felt the satisfaction of passing on what I had learned, and helping people progress in their careers, I felt that there just had to be something deeper and more meaningful in life than my own career. That corporate ladder didn’t end in the fulfillment I was expecting. I was searching intensely now.

The ministers from the Ananda Dallas Center came to visit our center, to share what they were doing and to find out what we were doing. Our metaphysical classes studied, among other things, Yogananda’s teachings from his Praecepta Lessons, so I was already familiar with the teachings. However, I had been missing something in my study of metaphysics that I really longed for—devotion.

In 1995 I started attending Sunday services at the Ananda Dallas Center. I joined the choir and fell in love with Swami’s music. In April 1996 I met Swamiji in Dallas when he visited. At first glance, I knew he was my teacher! We had a private meeting, and after talking for a while, he looked directly into my eyes and said, “I want you to teach!” I was thrilled. By his instruction I organized a group of devotees in Dallas and prepared them to take the teachings, primarily in the form of meditation and stress relief, out to corporations, schools, public libraries, and clubs such as the Optimists and the Shriners. (I’d already had prior experience working with these groups.)

In December 1996 I moved from Dallas to Mountain View, California to live in the Ananda community. I taught meditation classes both at the Ananda teaching center in Palo Alto and at East West Bookshop in nearby Mountain View. Then, in 2000, I moved to Ananda Village.

Since I have lived in Ananda Village I have been blessed to have many opportunities to share Yogananda’s and Kriyananda’s teachings: as publicist for Crystal Clarity Publishers (Ananda’s publishing house), by teaching classes at The Expanding Light Retreat, and as a staff member at Guest Services. And now I serve in our fundraising department, the department financially responsible for making these teachings accessible to the world!

What a wonderful journey, with each step challenging me to raise my consciousness to share on a new level. What I love about sharing these teachings is watching people grow: observing them expand their awareness of who they are, and seeing happiness and joy wend their way through their lives. Watching them come to the understanding that living in Truth is the path to freedom. Thank you, Master and Swami, for sharing these teachings with us. My heart is filled with gratitude.

About the Author
Pushpa Rainbow 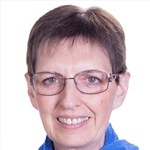