An affirmation is a statement of truth which one aspires to absorb into his life. It has been said that we are what we eat. It would be truer to say, “We are what we think.” 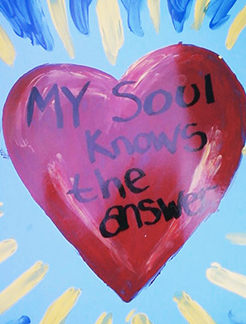 September 15, 2011. Where was I?… Glued to my computer screen, of course! A new gem had been added overnight to Ananda’s frontpage: “Economic Collapse, A Solution. By Swami Kriyananda.” My heart danced a jig… and it kept on dancing…

…For at least a month, wherever I was, there was that idea Swami suggested swimming around in my mind. About charity… that governments should launch propoganda campaigns to “[encourage] people to help their neighbors, not only themselves. Posters could urge people to consider all the ways that, in helping others, they are also helping themselves…”

Driving in Atlanta traffic I imagined a billboard over the highway with the words: “No dreaming is ever too high!” Or, the Family Services office with messages on the wall such as: “I am moving forward to a consciousness of Abundance and Compassion.” I thought about messages in the financial district that might read: “I seek happiness in giving of myself.” 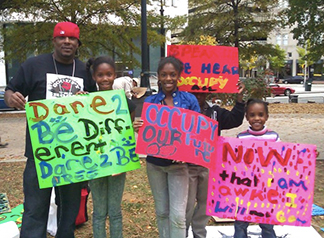 As I watched the Occupy movements across the country — I was inspired by the beautiful awakening of aspects of unity consciousness — of recognition of our Divine origin, of what I perceived as a response to the Age of Energy. It echoed, in some ways, my own inner cry for spiritual truth. But I also noticed all the variety of levels of consciousness and how one negative or angry voice could so easily drown out the many positive. So I posted the signs idea on the Occupy Atlanta Facebook page. Immediately two enthusiastic people responded and before I knew it I was inviting people to an event called “Dare to be Free: Signs to Uplift Consciousness.”

I photocopied lists of short quotations from Swamiji and Master, and took a book called Fire In The Soul: A New Psychology of Spiritual Optimism (that literally fell into my lap that morning at a coffee shop as I was asking Divine Mother for confirmation) and I headed down to the park. I watched people’s faces as they read the quotations — as they brought them to life with paint — as they owned the sign they created — as they shared with each other. 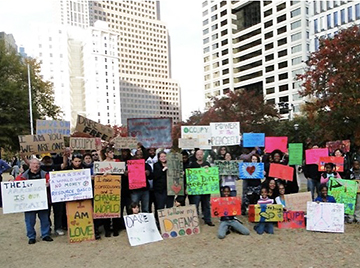 We repeated this event the following weekend at another more “neighborhoody” park. It was a great exercise in facilitating neighbors meeting neighbors and identifying with each other from the inside out. We were so excited by the support that we decided to hang up a few of the signs so the neighbors could enjoy their work. Two minutes later some angry young men whizzed by in their pickup truck and yanked the sign down…yelling “Stuuupid!” out their window. I felt their energy blow past me. I stood their for a minute in the street with my twine… and a great big laugh just flew out of my stomach and I thought of something I had just read in Swami’s The Art and Science of Raja Yoga:

Spiritual progress comes not so much by learning to cope with the world as by learning not to depend on the world.

In retrospect, this activity was an outward expression of joy at the recognition of God in me, in everyone, in everything that had been building over time. A week or so later it left me scratching my head, “How could it have been that I passed so many years and even lifetimes in such ignorance?” So… I opened up my Raja Yoga book, read the next chapter — about the importance of directing one’s energy inward rather than outward, then happily sat down to meditate, so that I may never, ever lose my beloved again.

About the Author
Premi