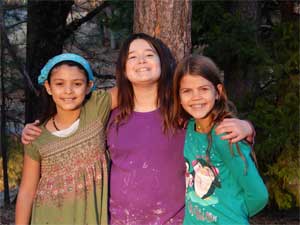 For the past year, I have been helping to lead an after school girls group called Spirit Warriors. The girls range from age nine to eleven. The focus of the group to help the girls with self-acceptance, self-confidence and a personal connection to the Divine within them through creative play and activities.

Before it began, I had this strong sense I was here to help children, specifically girls. The following day I received a call from my friend Premi. She told me she wanted her daughters to receive more spiritual guidance and support than was possible in Sunday School at Ananda. She had already called ten girls connected to Ananda to meet every Wednesday after school. “Oh! Can I help?!” I asked enthusiastically.

We’d start by singing songs, having snacks, and immediately there was a magic to the group. Ideas flooded into me and felt Divine Mother closely guiding me.

One of the first ideas that came to me was to lead the girls in various visualizations. Here is their favorite one:

First we gathered in a meadow on blankets and I asked the girls to lay down and relax. They then had to imagine themselves in a room in their home where they put on a pair of magical purple boots, and as they looked across the room they could see a little door they had never noticed before.

They opened the door and began to fly over a city with sparkling lights, and then over farm lands, and forests, and finally over the wilderness where they landed. Here, they found a rock to sit on and a sacred space where they knew they were very safe. And then before them appeared a goddess or a priestess wearing a beautiful cloak.

She holds both of their hands and looks deeply into their eyes filling them with unconditional love. The goddess then offers them their own cloak and puts the cloak on them as if to remind them that this unconditional love is always with them and they are protected. Eventually, they say goodbye, and fly back over wilderness, forests, the city and back into their room where they remove their magical boots. 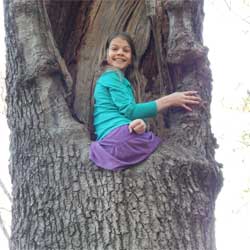 We then gathered together and each girl shared their experience if they wanted to. They were very enthusiastic and the cloaks came in all colors. They wanted to go inside and draw the goddess in their journals which if course they did.

Premi went out and bought fabric to match the color of each girls cloak which they had seen in the visualization, and for several weeks, with several sewing machines and helpers the girls sewed their own cloaks. This was a big hit!!

Later I led them in the same visualization where the goddess in the wilderness held a shield of light symbolizing inner strength. She offers them the shield and as they peer into the light they are able to see more detail of what is on the shield which I left to their imagination. We then went inside and to their delight their own pre-made wooden shield awaited them and now that were able to design and paint their own shield. This too was a big hit!

They have asked to make their own swords which I think would symbolize discrimination. I haven’t figured out how to make these swords yet. 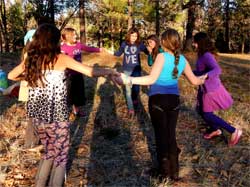 We have done so many activities from collecting pine needles and making tea, writing down gratitude lists, making magical wishing jars, service projects to earn money for orphans in Kenya, to Joseph Cornell’s nature games. We also get into discussions about being a true friend and being a strong person. We have a crystal ball that we pass around as the “talking crystal” instead of the “talking stick.”

After the typhoon in the Philippines, we talked about they power of healing prayers. I then taught them the healing prayer technique taught by Yogananda where they first tense their forearms, rub their forearms and then their hands together. They all could feel the energy between their hands, and then we visualized the Philippines in light and sent three oms to all the people there.

Every week during snack time, as we are serving juice, cheese and crackers and cookies, no one is allowed to serve themselves. Each must serve another and as they do so, they say something they appreciate about their friend. This leads to laughter and lightness and seems to dispel any possible moods they may have brought with them.

Last week, we had two new girls and we talked about the purpose of Spirit Warriors being cooperation, support, respect and sisterhood. And one girl blurted it out, “And fun!” Yes, and fun, for what is the point, if we’re not having fun?

Next week, I plan to focus on the aspect of listening as part of being a good friend. Premi no longer leads it with me, so my friend Punya now helps me, and we will be doing role playing on many ways to listen to each other, and ways not to listen to each other.  And then, we will let them practice in pairs. My daughter, Shanti, who is fifteen, will then teach them new ways to make friendship bracelets allowing the strings to symbolize support for each other. We will make extra ones for other friends who are not in Spirit Warriors to ever be inclusive and expansive. 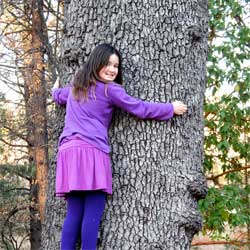 It is believed that in higher ages girls began their priestesses were an inherent part of many cultures, and began their training at young ages, perhaps even age nine. Priestesses have been associated with many ancient traditions including Celtic, Egyptian, and even Lemuria. I feel very connected to the energy of the priestess and believe it is time to bring it back to this planet. My aim is to encourage young girls to deeply discover their inner strength, deeper levels of self-acceptance, and a deeper connection the Divine within them before coming into the teenage years.

I feel honored to be part of this group, Spirit Warriors, as a creative way to bring in the teachings of Yogananda, and the higher teachings of more advanced times. My prayer is that many women will be inspired around the world to lead such groups for girls in whatever ways they feel inspired and guided to ultimately help uplift and change this planet.

Carianne is a mother and artist living at Ananda Village with her two daughters. To read more about Spirit Warriors, check out her blog: http://spiritwarrioress.blogspot.com/?m=1

About the Author
Carianne James 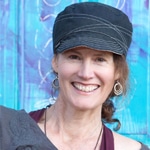