I spent my first winter at Ananda Village serving in the Yogoata dairy with a great devotee named Virani. She is responsible for supplying many of the village residents with nutritious and delicious goat milk products. I would say she has the strength of several grown men. After being with her for about a month, I began to notice that her strength was rooted in her love for the goats and her passion to share their bounty with our spiritual family. For all who come here she is a living testament of the powerful Ananda philosophy “Service is Joy.” Rain, heavy winds, snow, intense heat, hail, it doesn’t seem to affect her… seven days a week all year long she’s “braving the battle of life with strength unchained.”

Virani taught me how to milk the goats and take them on pilgrimage around the village to feast on all the wild plants that grow here. Selecting a fruitful area up in the hills, I would usually meditate while the goats would graze and play. More than occasionally I’d open my eyes and realize the goats had long deserted me and I’d have to go and find them! Or one of them would have my backpack in it’s mouth, attempting to eat the fruit I’d brought with me. 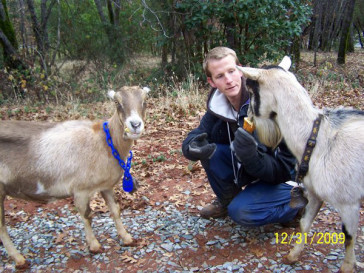 Along with the goats came Jenny, a burro who would act as our bodyguard against any possible predators. A burro is another word for donkey or mule; there may be some difference but I am not educated in these matters.

After a period of “meadow-hopping” that usually averaged 2–3 hours, I was to chaperone Jenny and the goats to a fenced in hillside where they would spend the remainder of the day frolicking and chewing their cud. At this time, I would generally employ my time with other barn duties.

On Sundays, we’d be sure to have them in their fenced area in time to attend Sunday service at the Expanding Light Temple. So this meant that their daily pilgrimage was a bit shorter and sometimes it was quite difficult to convince them it was time to move. Most animals that I have been close with live comfortable lives rooted in certain routines and when those routines are thrown off, often there can be a rebellion…

Such was the case on this fateful Sunday morning when I was assigned the mission of taking them out into the hills and getting them into their safe area in time for the purification ceremony at 10:00am.

Now this was my first year at Ananda Village and I had fallen deeply in love with the Sunday service ceremonies. As it often happens, when we immensely enjoy something, we can become attached to it.

And so naturally I was not taking any chances of missing the service today. I made sure to get the pack moving at about 9:30 and things were looking good. As we arrived at the opening in the fence, one by one the goats made a single file entrance through it.

Success! The goats were in, now that just leaves Jenny the Burro…

I performed the signature “Yogoata!” call that Virani had taught me. But after more than a few repetitions I had yet failed to attract her.

I decided to close the fence with the goats in and go in search of Jenny.

After about twelve minutes, I looked at my watch…9:50…ten minutes until service begins.

I was now officially in a hurry.

I looked up the hill and there she was, waiting to get in the entrance I had unfortunately closed.

Eating the last piece of a banana, I approached her with the banana peel and thought to use it as incentive to coax her in the fence entrance. Banana peels are a delicacy in these animals’ eyes and usually one could draw them anywhere with a fresh one. For some mysterious reason however, Jenny just stood there about six feet from the fence opening, unwilling to move. I put the banana peel in front of her nose and as she nipped at it I pulled it away hoping to draw her forward…no luck.

I was entering into a slight panic now and I approached her from behind and pushed with all my might…not a step would she take.

I said, “Come on Jenny! I gotta get to service!”

She stood there frozen and I suddenly understood the phrase “stubborn as a mule”.

Glancing at my watch, I noticed it read 9:59. I was not going to be on time for the opening fire ceremony but at least I could still make the purification ceremony…if she would just move six feet forward!

Inwardly I was losing focus. Beginning to feel hopeless, I made one last desperate push from behind and this time with all the physical power I could muster…

With as much strength as I had been pushing, I backed away and hurled the banana peel in frustration at Jenny’s rear end!

To my surprise, she took a step forward. But then she turned and looked at me.

In those big brown eyes I perceived an expression that seemed to say, “Oh no, you did not just do that!”

Immediately she turned in the opposite direction and galloped away onto a walking trail, up a hill and out of sight. Now I’d done it!

Before I knew it I was in hot pursuit of a wild donkey all across Rajarsi Ridge, a viewpoint known for it’s serenity and calming beauty. A charming sight, I’m sure it was to any passing civilians.

As we zigzagged back and forth and slid through the wet mud I let out an exasperated laugh at the absurdity of the situation. I felt like I was in a comic book.

After a turbulent and exhausting five minute chase scene, somehow Jenny ran back down the trail towards the goats’ area. I had picked up a large staff about seven feet in length and was running with it towards the trail when I heard her approaching foot steps in my direction again.

She was apparently headed back toward Rajarsi Ridge and I was not going to allow this!

As she came into view in full gallop, I stood there blocking her path with my staff in front of me and was either going to stop her or get run down. It brought to mind the image of Gandalf in the movie, “Lord of the Rings” when he stood in the way of that demon and exclaimed “YOU SHALL NOT PASS!”

Within ten feet of me she saw I meant business and put on the brakes. Sliding in the mud, she came to a halt right before me.

It was almost as if she respected that I was willing to stand firm because from here on she yielded to my obvious desire to bring her back with me to the fenced pasture.

Again however, when we reached the threshold, she stopped before entering and glanced at me.

Something inside me had let go. I had accepted the fact that I was not going to make it to the ceremony and in that state of approaching calmness I could suddenly see the solution.

I walked in the fenced area toward the goats and didn’t look back to show that I was concerned whether or not Jenny would follow.

I could hear her walking behind me now and once we were far enough in, I turned and gave her the illustrious banana peel which I am sure by now had witnessed so much more than the average peel.

She happily chewed it and joined the goats for a rest. I locked the fence and ran to service, arriving at 10:30 with plenty of time to participate in the purification ceremony. Though I must say that Divine Mother had another type of purification ceremony in mind for me this day! And it penetrated to my core.

All I had accomplished by my childish temper was the prolonging of a situation that, with calmness and patient insight, could have been handled quite simply. But instead I had to run like a wild donkey in pursuit of a slightly wilder donkey on an unnecessary detour I had created through my own desperate attachment! Furthermore, I saw that if I had chosen to set an example for Jenny by first entering the pasture myself instead of trying to force her from behind, this whole muddy mess could’ve been avoided!

Later when I introspected on this ultimately fruitful journey I thought: How true it is that we cannot persuade others to go in a direction we would like by pushing them from behind. We can only lead by example, by first reforming ourselves and inspiring them to follow.

When I arrived at the purification ceremony, I wrote on my little slip of paper “stubborn as a mule.” Approaching the altar, I set the paper on fire as is typically done in this ceremony and dropped it in the urn symbolizing the incineration of delusion.

By the Grace of our Masters, I was free.