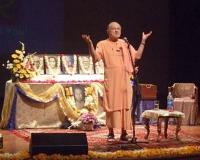 The last weekend of September, Swami Kriyananda, with a dozen Ananda India members traveled to Pune and Mumbai, where Swamiji gave major discourses in each city, speaking to a combined audience of 800.

He also inspected 3 pieces of property that could possibly be purchased for the creation of an Ananda community in India. 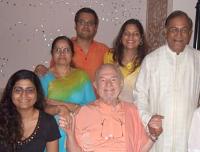 For the last 3 years we have been trying, without success, to find land in the New Delhi area to establish an Ananda community, similar to what we have in America and Italy. We’ve investigated dozens of possibilities, but have always encountered roadblocks, usually in the form of extremely high prices.

A few months ago, our Ananda Solar team (an alternative energy business we are developing in India) began to investigate business opportunities in Pune. They came across land parcels that cost far less than in Delhi. This sparked our interest. 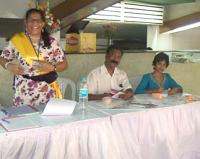 Pune, in addition to being a favored location for our solar company and a place where land might be available, is also a place where we met high quality students on our teaching tours. Pune is central to all the major cities we visit, and is close also to Mumbai where we have our most dynamic meditation groups.

For these reasons, Swami Kriyananda became interested in Pune and wanted to see the available land. While there, he also wanted to give a public lecture, both in Pune and in neighboring Mumbai. This would give him an opportunity to judge the temperament of the city and give energy to local devotees, magnetizing them for whatever project might develop. 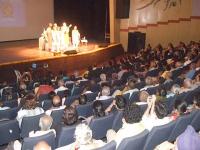 All of us at the ashram in Gurgaon had to scramble in the few weeks available to arrange all the details. We were fortunate to find venues on short notice, arrange the advertising, notify everyone in our database of Swamiji’s coming, and make travel and housing arrangements for the dozen of us who accompanied him on the trip. It all worked out beautifully in the end. 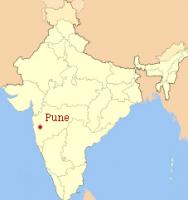 Swamiji spoke to 250 people in Pune on Thursday night, and another 550 on Sunday night at a beautiful auditorium in Mumbai. We were able to reserve it a couple of weeks before because of an unexpected cancellation. We followed the Pune lecture with 2 how-to-meditate workshops, to which 35 people came. Next weekend we go back to Mumbai for similar follow-up workshops.

In both cities, Swami Kriyananda spoke powerfully, inspiring appreciative audiences with Yogananda’s teachings, and encouraging them to help create a World Brotherhood Community.

People were very touched by his message. In Mumbai, he spoke for over 2 hours, even though he felt somewhat ill beforehand. I recommend you listen to his talk posted on the Ananda website. His entire lecture is going to be broadcast on Indian television. 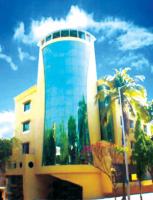 On Friday, Swamiji and a group went to see available land. Of the 3 parcels he was shown, he liked a 50+ acre parcel in the countryside outside of Pune, in the direction of Mumbai.

At this point it is bare land and very expensive, with a total price of 2 million dollars. However, it is in an area that is most likely to appreciate considerably in the future. If we hope to purchase it, we must raise a considerable down payment within the next month or two.

You will probably be hearing more about it soon, because we’ll need help from our extended spiritual family to make it happen. In the meantime, a committee is working on proposals to show the prospective investors. 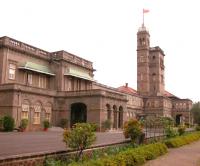 Since Ananda’s founding in India, this is the closest we’ve come toward actually purchasing property for a community. There is still a long way to go, especially because of the large sums needed, but whether we succeed with this particular proposal or not, we will keep trying.

If the land purchase goes through, some of us in Gurgaon will move to Pune to create an ashram as a first step toward community. We would create a teaching center there to act as a beachhead for our efforts, and maybe even do something more in Mumbai. Even if this deal falls through, there are other opportunities in the area. 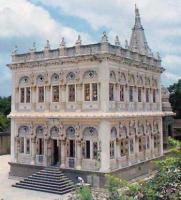 If we purchase the property, we will then need an additional 2 million dollars to do the required infrastructural development, and to begin construction on a few initial buildings. As you can see, it will be some time before we can actually move onto whatever property we buy.

Our local supporters in Pune and Mumbai are very excited about the possibility of Ananda expanding our work in that part of India. Swami Kriyananda is very keen on us doing something soon, so it’s our hope that doors will open for us in Pune and Mumbai. If they do, we will maintain our presence in Delhi and Gurgaon but begin to focus our growth in this new direction. Let’s see what happens! 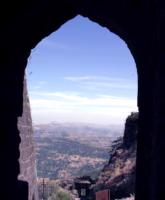