Gita originally wrote this on April 22nd, 2013, the day after Swami Kriyananda’s passing. She grew up at Ananda Village in California while Swamiji was living there.

My spiritual guide and friend in God, Swami Kriyananda, passed away on Saturday night at 11pm PST. It almost feels embarrassing or ego-centered to recognize how incredibly fortunate I have been to know Swami since birth. Who am I to have been so blessed?

The answer, of course, is that I am no more special than any living person… In truth, Swamiji has touched tens of thousands of people’s lives in very personal and profound ways, so my own experiences with Swamiji are not that unique — only unique to me. 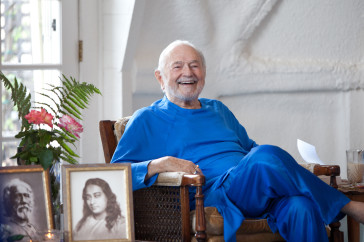 For anyone not familiar with Swami Kriyananda, he was a direct disciple of my guru, Paramhansa Yogananda, and founder of the spiritual community where I was born and raised, Ananda Village. It’s hard to put into words how special Swami is as a teacher, disciple, friend and spiritual guide. When you take a macro view of his life, it is clear that by his 150 published books, 400+ pieces of music, 10+ thriving spiritual communities worldwide, major motion picture, Swami accomplished more than most could think possible in a single human life.

That’s not to mention the fact that throughout his outward work, he always placed the importance of each of his student’s spiritual growth before all else…He didn’t lock himself in a room all day everyday for 86 years to write — he managed to write while constantly lecturing to crowds of people around the world, recording video messages aired on television and web stations everywhere, taking time to meet one on one with gurubais in need of counsel, and answering hundreds of email requests for guidance daily — his energy was truly boundless. It’s mind boggling what he has done with his life, which can only be explained by his ability to tune into his guru and allow the energy of God to flow right through him. That’s his explanation and it’s the only one that makes sense to me.

So how about on the micro level? Who was Swamiji to this little yogi? For me, Swami was many things at many points in my life. As a little girl, he was the joyful grandpa or great uncle who’s smile put you at ease and who’s hug was full of love. I spent countless hours playing in the gardens of Swami’s home at the Crystal Hermitage; swimming in the pool in the heat of summer, picking flowers for fairy crowns in the height of spring, or imagining I was a princess in a tower looking out from the window inside the dome.

My most vivid young memories of Swami were his many phone calls to our home in search of my mother – his book publisher at the time. I had the great fortune of almost always answering the home phone when he would call. In his booming, clear voice he would ask me questions about my day with genuine interest and kindness before requesting to be passed to my mom to discuss business. I loved his voice.

As a little girl, I once asked my mother who were my god-parents. My mother replied that Swami was my god-father… I was thrilled! I hate to admit it, but I spent more than one lazy afternoon daydreaming that due to some terrible tragedy, I lost my parents and got to move into the Crystal Hermitage to live with Swami — sorry Mom! It wasn’t personal ;)

Over the years, my parents gave me dozens of little relics that belonged to Swami – often things he had asked them to give to me. My little homemade blue alter was covered in special things of Swami’s, along with random special things that I had collected in my life. Sadly, many of those relics have long since disappeared, but a few remain in my possession and dear to my heart.

Swami’s vibration permeated my entire childhood — his sweetness, his joy, his innocent energy – all translated into a childhood I could not have imagined more beautiful. My friends and I played imaginary games about fairies and elves and horses and magical kingdoms without any awareness of being ‘cool’ or ‘uncool’. Much like Swami’s music, our games were mostly light and full of wonder…we played them well beyond the age that most kids become hardened and self-protective. I didn’t realize it at the time, but in creating Ananda Village and infusing it with his and Yogananda’s vibration of bliss and joy, he created a space for children like me to thrive.

Admittedly, there were a handful of teenage years (namely 16-19) where I became callous and hard-edged and thought the whole thing fairly cheesy. Fortunately, it was a phase and, after a few hard knocks in life, I realized that the joy Swami encouraged was WAY more fun than wallowing in the grit and edginess that much of life has to offer.

I vividly recall beginning to come out of the haze of teenage angst while studying in Florence Italy during my Sophomore year in college. It was at this time that I took a trip over a long weekend to Ananda’s retreat in Assisi where Swami was living at the time and my parents were visiting. I immediately felt at home in the Assisi center and fantasized about leaving college to stay and live there. This was when Swamiji gave me the first direct advice of my life — he suggested that I return to college and finish my education. He could not have been more right. As I matured and began my career, it became amazingly clear how important my years of undergraduate and graduate study were to my confidence, knowledge base and outward work.

After college, I took some years to work for my parents in Seattle and study the teachings of Yogananda. In those years, I reconnected with Swamiji and he showed me his genuine interest in my well-being through numerous meetings and opportunities for darshan. Whenever our paths crossed, he made time to meet privately with me for tea or invited me to eat at his table. It was truly humbling to be given so much time with him to ask questions and share his vibrations. In truth, much of that time was spent in laughter — we both love to laugh and there always seems to be fun ways to find humor in life.

Later, when I went through several years of hardship in my first marriage, Swamiji made special effort to counsel me and give me his energy. It was on my first trip to India, after my ex-husband and I separated for the first time that Swamiji’s advice again changed my life forever. He said to me, “Set your own spiritual sail and the rest will follow.” It took me a little while to soak those words in and to follow his advice, but as I aligned my “ship” more and more in my own spiritual direction, the marriage crumbled and I was strong enough in my spiritual center to move ahead with my life.

In recent years, Swami’s interest in my well-being never waned. As my new marriage blossomed, Swami blessed us with great kindness and again with his energy. We had the incredible joy of receiving his blessing when we first began to explore our relationship, when we decided to marry, on the day of our astrological wedding ceremony, and before the birth of our first child (last month in India). 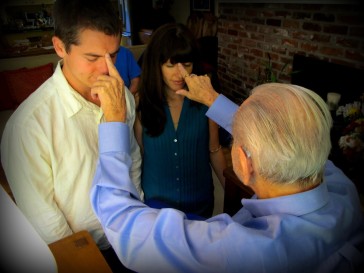 Like I said in the beginning, this is how Swami loves us all. I am not unique in receiving these blessings from him in my life. Observing Swamiji, he always found the person in the crowd who looked lost or was new and needed to feel accepted. He gave of his time freely and lovingly to anyone in need. I often reflect that the amount of energy he put into his friendship with me came from my sincere need for his magnetism to help me dedicate my life to our shared Guru. That’s the thing about Swami — he cares only for your own happiness. 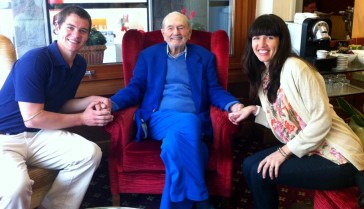 As I say goodbye to my “Papa,” as he once called himself to me, I am eternally grateful and humbled for the fortune of having Swami Kriyananda as friend, family and guide for 32 years. Though tears well up at the thought of not seeing his smiling face again, I am so happy for him to be free in God and with our Guru once more. His life is a testament to what is possible for each one of us if we dedicate our lives to God.

About the Author
gita

Gita is Director of Development at Ananda Sangha Worldwide. Born and raised at Ananda Village, Gita studied and worked in the nonprofit sector in San Francisco, Seattle, and Los Angeles before returning in 2011. Today, Gita lives at Ananda Village with her husband and their two young children.
Read more