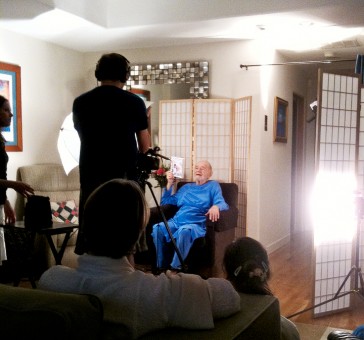 Behind the scenes: (right to left) Swami Kriyananda talking about The Time Tunnel, Bryan McSweeney filming, and Avital Miller directing

Last June I initiated a project to film short video clips of Swami Kriyananda while he was at Ananda Village, promoting a few of his books from Crystal Clarity Publishers.

This project kept getting postponed, possibly so I could learn a few lessons along the way. The original shooting date was postponed due to the uncertainty of Swami’s health. We left the new date open-ended to see how Swami would feel each day.

Every morning I awoke and wondered if this was going to be the day. Nothing happened. Then Swami moved to Los Angeles in August 2010, and it was agreed they could do the filming of the video clips in LA without me being present. In my mind I let go of doing the project.

While attending a book marketing convention in Fall of 2010, I found out that short video clips are a cutting edge medium to market books. This convention lit a fire under me. Since no one in LA had as yet filmed the video clips, I contacted Swami and got a concrete date set for the video shoot.

I realized that in order to make the project happen, I needed to be more enthusiastic, take more initiative, and be physically present during the filming. This realization brought me to the first of several lessons I learned from working with Swami Kriyananda on this project:

Lesson 1: A project can only move along with energy. You have to really believe in something and put energy into it. And the person with the energy of inspiration should be present to launch the project.

Yet another lesson was awaiting me upon my arrival in LA. Swami had fallen and gone to the hospital that morning. (Luckily there was no serious injury.) Then Ananda LA’s management team had an important meeting that took precedence over the scheduled filming.

Every morning, once again, I awoke to see if I would be meeting with Swami. I extended my LA visit to the last possible moment. I had to keep my faith in the project and trust it would happen. Swami finally called to meet with me my last evening in LA.

Lesson 2: Give up being a type-A Virgo personality, be patient, and go with the flow.

When I arrived for the meeting Swami had just woken up from a nap after not being able to sleep for months. Instead of telling me he was not awake enough to shoot the videos, he asked me in a joking manner if he looked good enough to be on film.

Swami thought he might be more awake after we had some tea. During tea, we spent a couple minutes discussing the project, and he said he would like to do the filming. Then he quickly switched the topics and told me his story of coming onto the spiritual path.

There was so much wisdom and beauty in Swami’s words; you would never have known he was tired. He spoke with such depth, it sounded as if the whole world was inside of him. Swami displayed the ability to disconnect from what is happening with his physical body.

(I remembered a story about Swami. He was so sick he could barely breathe. Someone had come over to talk to him. Despite his caregiver’s advice, he got up and had a discussion with this man as if nothing was wrong. As soon as the man left, he crawled right back into bed. Once more, he was barely breathing.)

Swami emphasized certain points in our conversation, yet I had no idea what they had to do with me. For instance, he talked about different languages and the order they put their words in. I thought, “I don’t write the books, I just sell them. What does all this grammar matter to me?”

However, I trust that there is nothing irrelevant in what Swami does or says. Thus I reflected on the meaning behind everything he said.

The perspective from which Swami explained how he came onto the spiritual path is similar to my own. The knowledge he shared with me has already been useful in how I present this path to others.

The other points he made involved skills I may need to develop and possible future directions for my life. I cannot help but notice that while writing this blog I am already trying to use some of the tips Swami offered during our conversation.

He did not directly tell me what things I need to work on. He allowed me to figure things out on my own.

It was very sweet to see how he really wanted to do the filming of the videos that evening, but his staff and I agreed it was not the best time. I realized that instead of telling me what should happen, he coaxed me to figure it out on my own by asking if he looked well enough for filming.

Thus, we have Lesson 3: Swami gave me a living example of the lesson he teaches in his book The Art of Supportive Leadership: “A wise leader convinces by sound reason, or by magnetism of his own conviction, but not by the mere outward authority of his position or past experience.”

I thought it would be about three months until I could meet with Swami again. However, I got lucky and only had to wait a month and a half.  The day before I was planning on going to LA for the Oratorio Concert in Dec 2010, I discovered that Swami had an opening in his schedule on the following day. I immediately packed and drove the seven and a half hours from Nevada City, California to LA.

Finally, everything went according to schedule. There was even an audience watching the filming.

Swami had once again just arisen from his afternoon nap, yet he immediately concentrated all of his energy on the video shoot. He hit every nail on the head and perfectly expressed what I thought needed to be shared. He made quick jokes between some of the clips and told a story at the end to entertain his live audience. We recorded short promo clips for twelve books without Swami needing a break.

During the process of recording the clips, Swami challenged my approach to eliciting the information from him that I felt should be presented in the videos. He did this in a way that would normally have pulled me off of my center.

Because I assume that everything Swami does has a message, I was willing to look at what I needed to change rather than get upset. I discovered that by changing how I prompted Swami for each video, his reactions changed. I kept altering my method of delivery until I got the desired results.

Because I trust Swami is a true channel for the Divine, I tried to discover what the lesson was instead of reacting emotionally. It struck me that I needed to apply this same approach to other situations besides that one with Swami. Every situation is a gift from God handed to us on a silver platter, for us to learn and grow.

The Essence of the Bhagavad Gita

[We’ll have more coming in the future! —Editor]

About the Author
Avital Miller 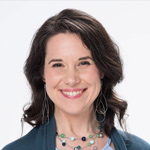