Life here in India is never dull. I want to tell you a little of the hardships (tapasya) and the blessings that inevitably run hand in hand with progress.

When Michael and I arrived in India there were 11 or 12 great souls striving earnestly in preparation for Swami Kriyananda’s long awaited arrival at the Kriya Yogashram, outside Pune. They needed help, and that is what we came here to do. House cleaning, painting, road work, landscaping, temporary temple building, house building, you name it, that project was happening. The place looked as it was, a huge building site!

Whilst all was going on, Nayaswami’s Nirmala and Dharmadas were called away to Gurgaon, Delhi to meet Swamiji there. I think they were gone for close to 3 weeks before Swamiji arrived here on the land. We devotees all had our allotted tasks. Michael and I were given to ensure Swamiji’s house was made ready, to be infused with sattwic energy and to gleam like a new pin. We were happy to do it. What a blessing to prepare for a saint such as he. I was blessed, too, by the help of our wonderful Indian devotees, who supported me to the hilt in my rawness. I had only been in India for 2 weeks! I had never seen Swamiji’s house as it should be when he is in residence…Help!

Everything that could go wrong went wrong! We experienced regular loss of power for hours most days, the worst in the history of the Kriya Yogashram. I will digress here just a little.

Each morning I rise at 4 am for sadhana. One morning, we had no power. The house was pitch black. I fumbled around doing the energization exercises in the dark. When I had finished, I made my way to were I knew my mediation mat was, in front of my make-shift alter. I was walking blindly in that direction when Guru put the thought in my head to put on the solar lamp. I did not need to; I had managed so far very well, but the thought was very strong. I did not need to move to reach for the lamp. I switched it on. Inches away from my foot, and right next to my mat, was a scorpion. It was only small, but when we showed it to Dr Aditya in the morning, he said that although it would not be fatal to be bitten by it, this particular one would have laid me flat on my back in agonizing pain with prolific vomiting. At the time I just covered it with a glass bowl and watched it moving around inside, happy to share my meditation with it until it could be taken outside when it was light. Thank you, Guruji!

As well as living with no power, we also had no water on 3 occasions, as lorries repeatedly burst the water pipe by our home. Many became ill with coughs and colds, and my main, dear helper who came twice a week from the far side of Pune City lost her driver and, therefore, her car. Dependent now on a rickshaw, she braved the journey laden with bundles of washing and parcels until she met with more suitable transport for the hour and a half journey to the land. She, too, succumbed to the virus that was worming into peoples consciousness’s. 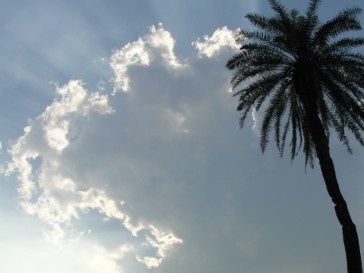 Monsoon , that sneakily appeared to have gone, began its retreat from the coast and came back to us with a vengeance. Locals said that it stayed weeks later than in previous years. The roads once more became mud, and my poor husband was trying to dry out wet walls in Swamiji’s house to paint, and not making much headway. Whilst he could not progress, neither could I in preparing the rooms. I battled with the film of grey builders dust that was waiting to greet me anew each morning, over every surface and floor. There was nothing for it but to soldier on as best we could, and to pray. 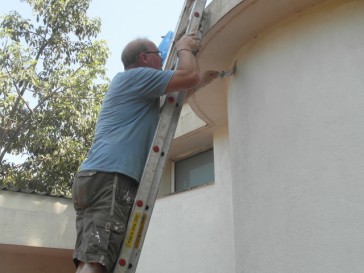 Whilst this was going on we were still in the process of registering with the Indian authorities and many hours of many precious days were wasted waiting…and waiting…in government buildings. Our furniture and comforts, sent by ship from UK, was sitting in Mumbai port due to a paperwork error. It still is to date!

Whenever Swamiji travels he seems to become very sick. A very real tamasic (dark, heavy) force made every attempt to disrupt the sattwic (uplifting) energy he channels into Master’s work. It was doing its utmost to disrupt our efforts too. All over the world Ananda devotees were praying for his recovery. He is much improved now, I am pleased to tell you.

I will not deny that at times we felt we were banging our heads against a brick wall. Our leaders empathized, and sent their blessing and encouragement from where they were, in Gurgaon, frustrated that they were not able to help, They, too, had their difficulties in Gurgaon, and so no one rested.

But those who are sincere on this path to God must learn to eat disruption for breakfast! We would never make in-roads on our individual spiritual paths, let alone the community path of our extended Ananda family, if we fell at the first hurdle, or even the hundredth come to think of it. Swamiji, weak as he was, insisted on making his trip to join us.

The blessings that came through lessons learned were many, as far as I was concerned. I learned that no matter how I plan my day, Divine Mother will have it Her way. I am no longer attached to eating meals at a set time. If I miss a meal, I miss a meal. No big deal. I thought I was already a patient person. This has been sorely tested. I know I have much to learn. I already know the value of no-strings friendship, and that of being part of a whole; that each facet of the whole is unique and to be respected for being so, even if it may not be wholly understood from where I stand.

Both Michael and I learned the joy of service; the giving of ourselves for no reward other than knowing that all was given for the love of God, in this case through Swamiji.

It has been 6 weeks now since we arrived in India. If we both continue to learn as quickly as we are now, despite all the hardships and tests that are probably as difficult as any we have already faced in this life, then we can honestly say that we would not have missed it for the world!

To see our beloved Swamiji walking up the drive to his house for the first time in over 18 months, sick and weak as he was, it was all worth it; to feel and know Master through him, for the blessings and change for the higher good that cannot help but emanate from this saintly man to all those around him. 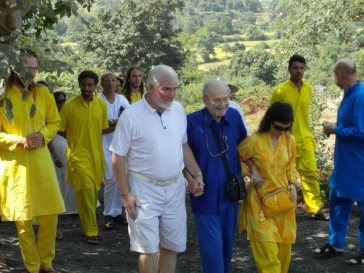 A dear friend described to me some time ago what it was like living in Swamiji’s presence. He likened it to a huge whirlwind. We devotees are whipped round and round in the fray, whilst Swamiji calmly observes from the eye, the spiritual eye! Karma is quickened, the lessons are tough, but the rewards are great. The greatest lesson I have learned in this so very short time? That Love can move mountains!