I find that parenting is a lot like Paramhansa Yogananda’s analogy of the spiritual path: running at top speed and doing stunts along the way.

I thought I was fairly well prepared for fatherhood.

Many years ago I was part of Ananda’s first monastic order. 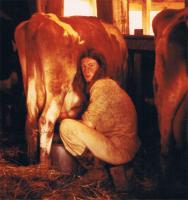 Richard as a monk, working in the dairy

During that time, and for years afterward when I was single, I tried to see how much this body could do while keeping in mind Yogananda’s affirmation: “I can do everything, when so I think.”

I recall, for instance, several years in a row when the month of January was very demanding. In addition to my usual duties as the bookkeeper for East-West Bookstore, there was end-of-the-year accounting to be done (which included end-of-month and end-of-quarter calculations as well).

At the same time, I was in charge of an inspirational event to celebrate Yogananda’s birthday. So my evenings and weekends were fully booked. I remember how, during those days, I would be very busy from when I woke up until late at night when I collapsed on my bed, still resisting the thought of being tired.

Although this approach helped with developing will power, after becoming a parent I discovered that pushing oneself to the limit and resting didn’t work when it came to children. Because, inevitably, when I reached the point of needing to rest, THAT was when my son needed me most.

And so I learned to pace myself, always leaving a little gas in the tank for those unexpected moments when it was needed. 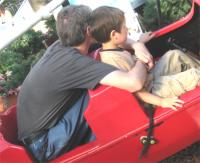 Someone said that the lessons of parenting are “giving, giving, giving” and self-forgetfulness, and I think that is true. It reminds me of a Herman Hesse story I read many years ago. I’d like to share here my recollection of it.

An Angel of God Appeared

A long time ago, a young unmarried woman in Europe gave birth to a boy. Her family and lover had abandoned her and she was alone when her son came.

Without the money to pay for a midwife, she had no care during the birth process and now she was dying. She was a very spiritual woman, and as she prayed piteously for help an angel of God appeared to her.

The angel told the woman that he was empowered to grant her dying wish. What was it to be?

“I am desperately worried about my son, what will happen to him,” she answered. “There is no one to take care of him. And so my wish is that everyone will love my son, no matter what, so that he will always be cared for and will not lack for anything.”

The angel heard this plea with a sad look, and said to the woman, “Are you sure?” “Yes!” she cried. The angel sighed. “Let it be so.” And the woman died.

A short time later the woman’s family, feeling suddenly penitent, burst into the room. They found the baby and buried his mother. Taking the little boy to the ancestral mansion, they determined to raise him in the bosom of his family.

Years went by and the boy grew to be a young man. He lacked for nothing and was always sweetly cared for. His grandparents and other relatives could deny him nothing, they loved him so.

But the boy was not happy. He had learned early on that no matter how he behaved, everyone still loved him. Searching for boundaries that weren’t there, he experimented with being as bad as he could be. Still, he suffered no consequences.

With no reins on his actions, he developed habits that made him deeply miserable. Over time he began to hate himself and to hate all the people who smiled at him and loved him no matter how despicable he was in return.

His family, confused by the young man’s behavior but still adoring him, had arranged a marriage for him with a distant cousin who was beautiful and rich.

But the young man had reached the point where he couldn’t stand his life anymore. And so he decided to end his life—not only to escape his personal pain, but as one last great injury to all those who mindlessly loved him.

The young man locked himself in his attic room. He was about to commit suicide when the same angel who had helped his mother appeared to him and said, “Wait!”

“Before you take your life, there is a story you must hear.” 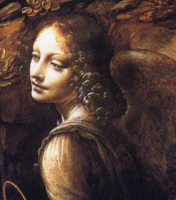 And the angel told the young man about his mother and her dying wish.

As the young man heard this story, his heart opened. He suddenly understood everything that had happened in his life, and he wept.

The angel said, “You are free now to do whatever you decide. But, as in the case of your mother, I have been given the power to grant you one wish. Is there something you would ask of me?”

The young man, with tears running down his cheeks, said, “Yes. I want to change my mother’s wish. From now on, instead of others loving me, I want to be able to love others no matter how they treat me.”

The angel beamed and the room was filled with light. “Are you sure?” “Yes!” cried the young man. And his wish was granted.

Immediately, the young man heard shouts and curses emanating from the lower floors of the house. Everyone in his family had suddenly realized how badly the young man had behaved: the biting things he’d said, the cruel tricks he’d played. No longer compelled to love him without cause, they were ready to have it out with him.

The young man opened the attic door and received them. As his family denounced him, his heart filled to bursting with love.

Many people hated this man for years afterward and sought revenge for his early bad behavior, but he always responded with love—a love that grew and grew; a love so selfless that, in time, it reflected the perfect love of God.

And when the man died, surrounded by angels, he was one of the happiest people on earth.

Rewards That Come with Selfless Giving

Of course, this story cautions us about the importance of wise discipline in childrearing. But most of all, it describes the rewards that come with selfless giving. 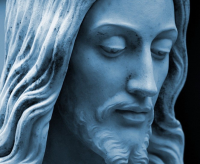 Jesus said, “It is more blessed to give than to receive.”

As we offer our love selflessly to the world—whether as parents, seekers, or friends—we expand our sense of self. And in that expansion, we experience the ever-new joy of God.