This Easter week I am reflecting on the life of Jesus Christ and the spiritual alliance he created with our line of gurus from India – Babaji-Krishna, Lahiri Mahasaya, Swami Sri Yukteswar, and our Gurudeva Paramhansa Yogananda. It was their mission together to unite East and West and initiate the global movement and message of Self-realization for the spiritual unity of all humankind. 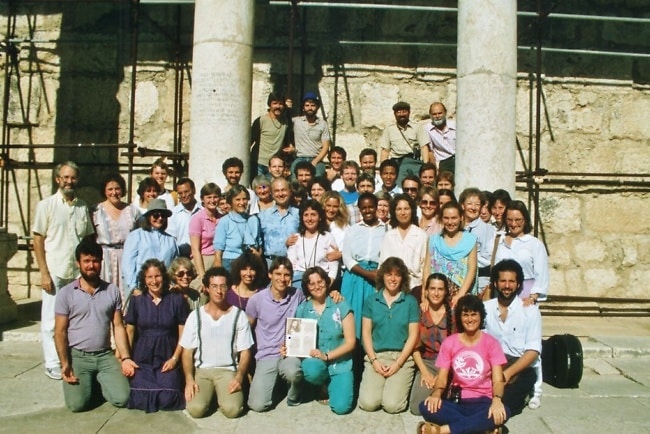 I was blessed along with over 40 devotees and Swami Kriyananda to be a part of Ananda’s first pilgrimage to the Holy Land in November 1985. Our celestial band of 40+ warriors came with open hearts to Israel to meditate and sing devotional songs at the Christian and Jewish shrines. We traveled for ten days from Tel Aviv to Galilee, from Jerusalem to Bethlehem, from the Mount of Transfiguration to the River Jordan, and from Qumran at the Dead Sea to the Mount of Olives at Gethsemane. 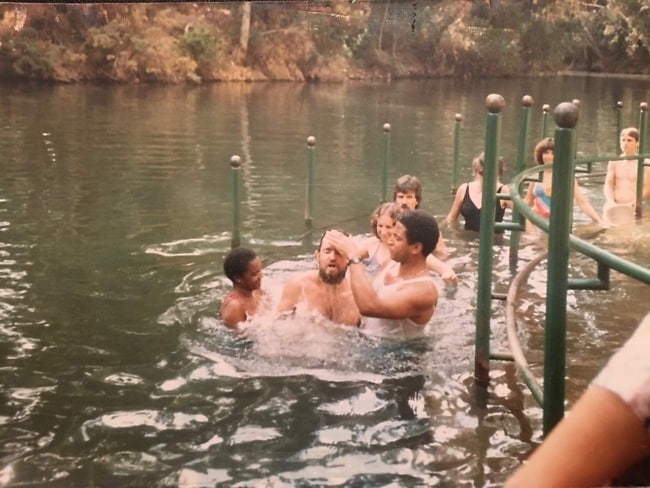 Baptizing at the Jordan River.

In all of the holy places we visited, we sang songs from Swamiji’s Oratorio – Christ Lives in the Holy Land and in You (as it was originally called). Swamiji had been inspired to write the Oratorio from his previous visit to Israel in the winter of 1982.

Like an archeologist, I peeled away layers of history past and was able to divine deep behind on the physical appearance  of each sacred place to see what really went on, spiritually speaking. -Swami Kriyananda 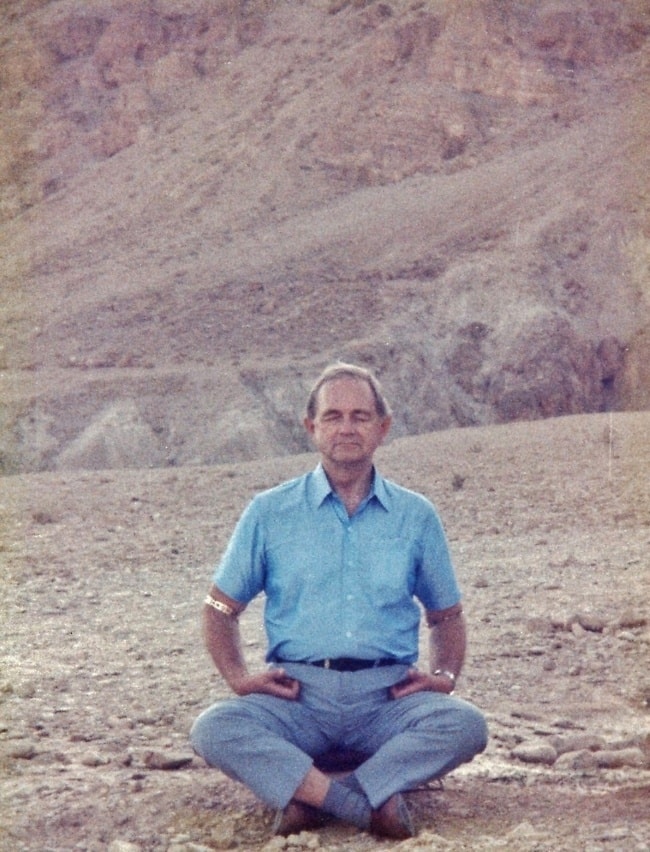 Swamiji meditating at Qumran, near the Dead Sea, 1985.

Swamiji had so profoundly relived the experiences of Jesus and his disciples that he felt a great blessing from them and the Masters of India. I personally felt that Swamiji had been raised into an exalted state of samadhi, or oneness, at this time. He composed some 60 individual musical compositions for solo voice, choir, and instrumentals based on the powerful inner visions he experienced during his visit two years prior to our pilgrimage. In that interim, people from around the world learned the songs and music of the Oratorio.

Historically, Palm Sunday represents the time when Jesus was declared by the multitudes to be the Messiah and King of the Jews. Within a week as the story is told, he was betrayed, tried, crucified, and resurrected.

If you’d like to know who I am, listen to my music.Swami Kriyananda

“If you’d like to know who I am, listen to my music,” Swamiji would often state. He essentially saw himself as a humble devotee of Yoganandaji.

I would like to invite you to watch a video clip of the Ananda World Brotherhood Choir singing “Palm Sunday.” Listen to and sing as much of Swamiji and Master’s music as you can and make their music your own.

The Ananda Holy Land Pilgrimage was a dream-come-true for me. The places that I read about in the Holy Bible growing up in the Christian church came to life for the first time. I visited the sacred places where Jesus walked, talked and met with his disciples, and performed miracles. Our group sang and meditated for long hours at these sacred shrines. The experience was beyond words and it significantly transformed my spiritual life.

Swamiji’s representation of Jesus Christ and the teachings of the Masters of India in the Oratorio has uplifted and inspired many people. Swamiji encourages us all to awaken to our spiritual potential and become warriors for Yogananda and Self-Realization. The time is now! We can claim our kingdom as children of God, seeking to live in the universal Christ Consciousness each day and for All Eternity.