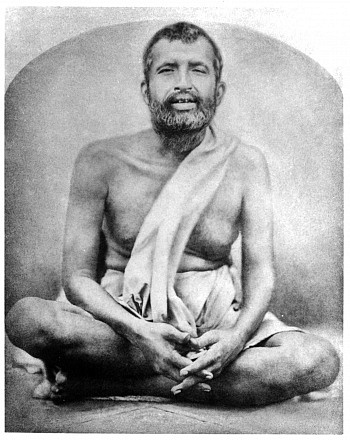 Born into a pious family in Dere, Bengal, at about the time of the American Revolution, Ksudiram grew up devoted to Sri Ramachandra and blessed with the noble qualities of a true Brahmin—truthfulness, contentment, forgiveness, renunciation—all of which his life was to test again and again. Each day he began by gathering flowers for his worship of Ramachandra. All day he carried out the pious duties of his station in life, ever steadfast in the path of religion as he took on management of the ancestral property and entered into marriage and family responsibilities. Ksudiram’s wife Chandradevi was likewise devout, with a great and simple heart, deep faith, universal kindness, and a profound love of serving the gods and the twice-born.

Soon after the birth of their second child, the village landlord, a cruel and vindictive man, pressured Ksudiram to give false evidence against a villager who had incurred the landlord’s wrath. To comply would mean the villager losing his land; to refuse would mean losing his own. Honorably refusing to bear false witness, Ksudiram, like his divine progenitor Rama, was deprived of his patrimony. Utterly dharmic, Ksudiram remained even-minded, his heart free from despair and from bitterness, and simply gave himself even more fully to his Lord Ramachandra. And in response, working through the generous spirit of a dear friend, Sukhdal, the Lord showered blessings on His beloved child: a permanent home on Sukhdal’s estate at Kamarpukur. All that had happened Ksudiram took as the Lord’s lila; for what he saw as the Lord’s gift of a few simple huts and enough land to grow food for his family he felt only an overflowing gratitude, and even deeper devotion to the One Giver of all.

It was at this time that a divine dream came to him. Stopping to rest under a tree, Ksudiram saw in vision Sri Ramachandra in His form as the Divine Boy, his body green like the durva grass. Pointing to a particular spot in the landscape, the Boy told Ksudiram that He was alone and unattended, that He wanted to come home with Ksudiram to live and be served by him. Waking from his dream, Ksudiram’s eyes fell on the very spot Ramachandra had indicated, and on that spot a Salagrama stone guarded by a cobra with hood expanded. Unafraid, convinced that the dream and what he saw before him were God’s command to him, Ksudiram rushed forward. The snake disappeared. The stone had the marks of a true Salagrama. (A stone sacred to Vishnu.) Carrying the stone home, Ksudiram installed it reverently next to a consecrated pot of water—the stone as a visible form of the Lord as Sri Ramachandra; the water representing the goddess Sitala—Rama and Sita worshipped together.

True renunciates, Ksudiram and Chandradevi bore with patience whatever life brought them—or did not bring them. When there was no food in the home, they would simply offer themselves more deeply in service to God, continuing with their daily worship and normal household duties. Their spiritual radiance became so great that the villagers came to regard Ksudiram as a rishi. They would stand in his presence, and wait reverently at the village tank till he had finished his bath before entering to take their own. In Chandradevi, the villagers saw a loving mother, one who would feed not only their bodies but their hearts and souls as well: with unfailing sympathy, genuine welcome, and an affection that washed away all their sorrows and replaced them with overflowing joy.

Always, day by day, Ksudiram offered his devotion to God, praying so deeply as he recited the Gayatri Mantra that his chest would flush and tears of love flow from his eyes. Only the thinnest of veils separated the earthly world of Ksudiram and Chandradevi’s daily existence from the subtle realms inhabited by the gods of their worship. Walking out with a basket to gather flowers, Ksudiram would find himself accompanied by the goddess Sitala, appearing as an eight-year-old girl dressed in red and beautifully ornamented. Each blossom-laden branch She would bend down to Ksudiram’s hand to help him in his gathering.

In spring of 1835, now about sixty years of age, Ksudiram went on pilgrimage to Gaya to worship Vishnu and to perform obsequial rites for his ancestors. Inexpressibly grateful to God for making it possible for him to make such a strenuous journey and to complete the month-long ceremonial offering, Ksudiram was blessed with a sacred vision: a great temple filled with a divine light, brighter than any he had theretofore beheld; on both sides of a beautiful throne stood his forefathers, pronaming with reverence; on the throne a divine Being, His eyes gazing lovingly at Ksudiram’s as He spoke: “Ksudiram, your extraordinary devotion has made Me very happy; I bless you and I will be born as your son and will receive your loving care.”

Returned home, Ksudiram found Chandradevi wonderfully changed. Her eyes glowed with a divine light. No longer feeling the least concern for her own needs, she now felt a motherly love toward her neighbors, toward Ramachandra and Sitala and all the celestial beings that visited her, toward all life. To Ksudiram she confided that, while standing before the temple of the Jugis during his absence, she had seen a divine effulgence emerge from the image of Shiva, fill the temple, and rush toward her in waves, engulfing her and entering her body. To Ksudiram Chandradevi’s experience gave final confirmation to his vision at Gaya.

Though forty-five years of age, long thought to be past childbearing, Chandradevi glowed with the inner beauty and grace of approaching motherhood. All the world she perceived as her own children.

And so it was that in a small room with a thatched roof, a room normally used for husking and boiling paddy, was born, just before sunrise on February 18, 1836, the boy child who in later life was to be known as Sri Ramakrishna. Through Ksudiram and Chandradevi had flowed a great river of self-giving devotion to the Divine; the Divine in turn blessed these pure souls to be the earthly parents of His descent into human form.