Have you heard the saying “Man plans and God laughs”? I want to tell you of my recent experience in India, not because I wish to talk about myself, but because I want to demonstrate how God’s plans will always over-ride our own for the higher good.

I returned only last week from a most inspiring trip to India with blessings I could not have imagined. My first trip there, I had prayed that I would meet a Realized master.

For more than a year now I have been corresponding with Swami Kriyananda (direct disciple of Paramhansa Yogananda and founder of the Ananda communities) regarding meeting up at his newly founded community outside Pune, in the Maharashtra state of India. I consider Swamiji has now proved, in countless ways, that he has indeed reached jivan mukta status (freed while living) and that his was the saintly meeting that would answer my prayers.

It was always risky to plan in stone, however, as Swamiji never knows where he will be one day to the next for much of his time. Yet, it all looked good and my information when I left for India was such that I had a confirmed appointment with him. Only the day before I was to visit Ananda, I learned that Swamiji unavoidably had left, 4 days before, for Gurgaon, Delhi, which is a great distance from Pune. I calmly accepted the situation, knowing that all was right as it was. But did this superficial disappointment prevent me from meeting a saint? I don’t believe it did.

The day before I had visited the pilgrimage town of Shirdi, which boasts the place of the saintly Sai Baba’s Mahasamadhi (great samadhi in which a Realized master consciously sheds his mortal frame).

It was a Saturday. The town was literally heaving with pilgrims from near and far. The roads were gridlocked and not much ground could be seen above the sea of heads. When my husband, our driver and I located Sai Baba’s sacred shrine I was utterly dismayed by the throng of people queuing to receive darshan (vibrational blessing) from the famous shrine. I could see thousands upon thousands of devotees. This queue, we were told, was currently taking 5-6hours to reach the centre of the temple. The sun was at it’s highest, therefore the heat too much to stand in for any length of time. Disappointed, but again accepting life as is, our driver suggested we return in the evening as he hoped it would be less busy.

On the way back to our car, we walked counter-current to the advancing queue of pilgrims. All I could see was a flowing river of heads. Suddenly there appeared a gap in the crowd. I saw an old swami, dressed in the traditional ochre robe, long hair and mala’s (prayer beads) adorning his neck. He was advancing in a strong purposeful march, yet with such grace and agility he seemed to glide with the athletic prowess of a much younger man.

As he fast approached, our eyes met, and I couldn’t have hoped for the beaming smile from the angelic face before me. His eyes expressed instant recognition of me as an old friend, yet it went much deeper than that. I beamed back too, recognizing immediately this old soul as my oldest and dearest friend; my own. It was a meeting after millennia apart; the warmth, the love conveyed, the beatific smile….but those eyes!

Then, as fast as he approached, he was gone! I couldn’t get his face out of my mind: His eyes; the aura of youth on an old, yet very agile body. My husband and our driver didn’t appear to notice him at all.

It wasn’t until I was in meditation the following morning when… wham! The realization came upon me that this swami was indeed a man of Realization: A man of God. I have no doubt that I brushed the path of a true saint this day; that by default I received darshan from him as our eyes met, and also that he was a dear old friend that I was karmically bound to meet again in this life for mine and possibly his spiritual advancement.

That same evening the queue was still lengthy, though considerably less than earlier. We had a 15 minute wait at the entrance gate, with some confusion as to what to do next. Our driver was trying to get instruction as to where we should go as this was a massive temple complex. Then Divine Mother blessed us by sending the temple superintendent to lead us past the waiting throng of pilgrims to receive darshan at the holy blessed shrine of Sai Baba. We had not asked for preferential treatment, only that we wished to pray at the shrine and receive darshan. The experience was transforming for me. Walking barefoot along the pilgrim route up to the golden dais of his enshrined body with the acoustics of the ancient and powerfully effective tones of sanskrit mantra chanted by the high priest, I pranamed (bowed with hands in prayer position at the heart and forehead) at the feet of his saintly body. The energy in the ether was super-charged. We were further blessed by the high priest and were given prasad (food of the gods) and sacred ash, both infused with Baba’s blessing. 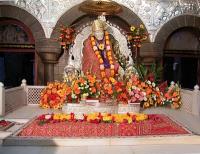 In my hotel room that night in Shirdi I knew I was changed. I deeply felt the blessings from the saintly swami and beloved Sai Baba which remain with me. What a day! Two saints instead of the one I had prayed for.

Divine Mother, you can override my plans any time you like. I thank you.