Last night was our third and final Easter season performance of Swami Kriyananda’s oratorio, Christ Lives, of which I have had the honor to conduct. The oratorio is composed of 50 short pieces including solos, instrumentals, and choir pieces, inspired by a pilgrimage that Swami Kriyananda took to the Holy Land in 1983.

Before the concert in The Expanding Light temple, the musicians and choir sat to meditate in our seats. We were joined in silence by the entering audience, and a tremendous vibration of peace began to fill the room. It had been a hectic time of preparation with many solos, ensembles, and instrumentals to put together, and the stillness was a calming balm, so inviting that I would have gladly just sat in silence for the next two hours.

What an extraordinary contrast to a typical concert experience, where the musicians are tuning up, chatting, or doing a last-minute woodshedding on a difficult passage. The audience is typically just as restless, and not until the lights go down does the silence begin.

So here we were, coming together not for mere entertainment, but to consciously create together, as musicians and audience, an experience of inspiration that can be tangibly felt. Despite some brief technical difficulties, a soloist who was losing her voice, and a new amplification system to work with, the result was tremendous.

Before the concert, I coached the worried soloist. “Don’t be afraid and apologetic about the condition of your voice instead, focus on the wealth of inspiration and devotion that you so beautifully channel. Convey that to the audience, no matter what squeaks might come out.” She ended up singing more beautifully than ever, with such depth of meaning. She told me afterward, “Yes—Love God! That’s all that really matters.”

A dear friend commented on the attunement that he felt between all of us. “Yes, I too could have been happy to sit for two hours in meditation, but what I felt from the music was a never-ending renewal of inspiration that changed from piece to piece.”

Each experience of the oratorio is slightly different for me, and performances right around Easter (last night’s one was directly on Good Friday) have an especially powerful vibration for me. I could easily imagine myself in Galilee, listening to Jesus speak, getting zealously carried up in the excitement of Palm Sunday, and then realizing that I had missed the point entirely, and what I held most dear was being taken away, leaving me stunned and devastated.

So deep and real was the experience that my consciousness began to slip, dwelling on the immaturity of those overzealous past habits. I wrenched myself into the present and focused on manifesting once again through music the ever-living presence of Christ within each of us. What glorious words to bring out from the choir, each one singing with the utter conviction of the truth of their own experience:

Gone all our darkness,
Vanished forever!
In our souls Thy light we see.
Gone our delusions,
Clear now our vision:
In Thy joy we live ever free!

How oft, like sheep, we’ve strayed apart!
Now guided by Thy ray,
In inner freedom of the heart
Our night has turned to day!

After the performance, the audience decided to hold their applause, which to some might have proved to be a very uncomfortable 60 seconds. For us, it was a short invitation in stillness to go within and appreciate what we had just experienced. Many could have sat and gone deeper, but there was still much to be done and people to be greeted and congratulated. And many there were!

In the three performances in Palo Alto, Seattle, and Ananda Village, the combined choirs of over 120 sang for over 250 people, with 20 singers performing the oratorio for the first time. There were many new soloists and instrumentalists, and a depth to the expression of the choir that to me is greatly satisfying. For those interested, I highly recommend watching Palo Alto and Seattle performances online. 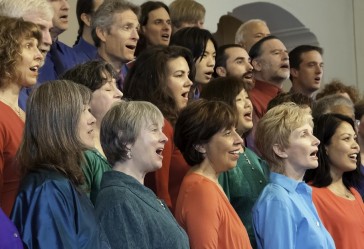 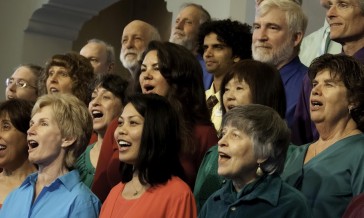 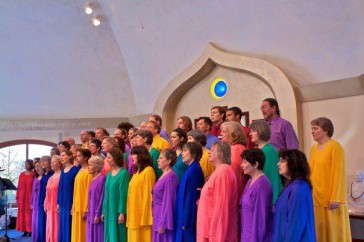 If you don’t already have it in your music collection, I strongly recommend obtaining the recordings of Swami Kriyananda’s masterpiece through Crystal Clarity or iTunes.

Finally, a recording of “A New Tomorrow.”

Wishing you all a Blessed Easter, and may the Light of Christ truly shine upon you.