Maintenance at the Expanding Light Guest Retreat, here at Ananda Village, is a study in contrasts.  The job can at times feel like smooth sailing, but barely a week later resembles treading water to stay afloat.  Many repairs are straight forward, such as fixing toilets or sinks, but others are larger projects requiring more expertise than one so new to the job might have!  I began in February of this year, and already I have helped put in new path lights for the guest cabins, helped replace the carpet in the Temple, tore out and replace the floor in the kitchen’s walk-in refrigerator, helped put up the shade tarp in the Yogananda Amphitheater, and worked many hours weeding and weed whacking around the grounds.  I have also had the joy of working with more capable souls than myself on projects, which I might not be able to tackle alone.  For example, in one inspiring afternoon, we prepped the entire amphitheater in a mere three hours due to a spontaneous, many-hands-make-a-miracle manifestation following a Sunday service.  The word was put out, and immediately many willing souls appeared to make it happen!

One recent project in particular stands out however, among the swirl of burned out light bulbs and clogged drains.  I had the good fortune to collaborate with Greg Traymar who is the US Director of Sharing Nature Worldwide.  Sharing Nature is a foundation dedicated to training natural history teachers in techniques in environmental education devised by Joseph Cornell, a minister and long-time resident at Ananda Village.  Having studied Entomology (yup, bugs) in college, and worked with California Fish and Game as well as the National Park Service in environmental conservation and restoration, I have a keen interest in the environment and its preservation, and wanted to help out in any way I could.

Sharing Nature has been incorporated into Expanding Light programs in numerous ways in the past.  One approach was erecting signs around Lotus Lake, a man-made reservoir on the Expanding Light grounds, with inspiring nature quotations for an exercise called the Trail of Beauty. In this exercise, one walks alone around the Lake in a clockwise fashion, pausing at signs spaced along the path with inspiring quotes and images concerning the love of nature and its beauty.  Examples include:

“Feel the love of God… You will find a magic, living relationship uniting the trees, the sky, the stars, all people, and all living things; And you will feel a oneness with them.” -P. Yogananda.

Another is by Helen Keller:

“The best and most beautiful things in the world cannot be seen or even touched – they must be felt with the heart.”

(More of these inspiring quotes can be found at www.sharingnature.com.)  The participant is encouraged to walk slowly, and to pause and reflect on the feelings evoked by each quote.

The signs were in a state of disrepair, which is where I enter the scene.  Wanting to have them done and available for the busy weekends ahead, I was able to quickly sand and re-oil the wood, which was still in good shape.  The signs came next, as did innumerable obstacles to finishing the project!  I was amazed at how quickly time sped by on other jobs.  Often it wasn’t until the end of the day that I found the signs piled up, still waiting.  So I began working evenings on the project, gluing the signs to their backings, digging the holes by the lake, and setting the sign posts in 18 inches of cement (THIS time they wouldn’t fall over!).  I was amazed that each time I put off the work with the thought I’m too tired, I often arrived home exhausted.  But each evening I said let me just try a little more, to put out a bit more energy to get this done, I didn’t feel tired at all during the labor, and often finished feeling like I could easily continue! 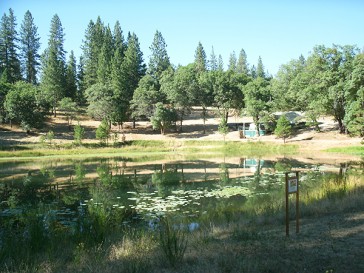 Finally the signs were finished, in time for the crowd attending the Yuga Conference weekend at the Expanding Light to enjoy.  Even though it seemed to be a self-imposed deadline, to have it finished on time for the busy weekends ahead was grand indeed!  More than anything, I felt that what Yogananda undoubtedly wants from me here is continual, interested, increased energy; ever-new, even as He is in Ever-New Joy!

About the Author
Brannon Forrester 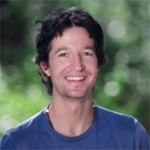