As soon as I graduated from Ananda’s Yoga Teacher Training, I went home and rented a space so I could open my very own yoga studio: Inner Harmony Yoga in San Pedro, California.

I felt very fortunate to be in my own studio from the very beginning, because that enabled me to cultivate an environment that would feel like home to my students. In fact, what it really felt like was my home.

As a result, whenever I was waiting for students to arrive for class, it felt like I was waiting for guests in my own home. This had implications, because I was raised in the Croatian culture, where no guest ever leaves your home empty-handed. You might give them a piece of cake, or lemons from the garden, or whatever, but you always gave them some-thing.

So whenever a yoga class ended and the students prepared to leave, I felt the need to give them something, just as I would if they had been guests in my home. But what could I give them?

I struggled with this question for while before a solution emerged. The idea came from the fact that, in the beginning of my teaching, I was tripping over my words rather a lot. (I’ll bet you can relate to that!)

Often I would have to skip the asana affirmations because the students just couldn’t hold the postures long enough for me to say every-thing I needed to say about the mechanics— what with all my verbal stumbling—and include the affirmations, too.

This problem, however, also spotlighted an opportunity: it gave me the inspiration of handing out affirmations at the end of class—and it’s something I still do.

The Crystal Bowl of Positivity

When we have finished meditation and healing prayers—which is the way I end my classes—and have closed the class with “Namasté,” I raise the lights a bit. Then I walk around to each student with a crystal bowl full of affirmations printed on little slips of paper, and I invite each of them to pick one. Those who have been coming for years must have dozens of affirmations, scattered in their cars, purses and homes.

Nevertheless, they always want to take another one home with them. In creating the affirmation slips, I chose a group of twenty different affirmations from Master [Paramhansa Yogananda] and Swami [Kriyananda]—some were asanas affirmations, and others were not.

Inevitably, then, regular students sooner or later get a “repeat” affirmation. So I jokingly tell the students that if they keep picking the same one over and over, Someone is trying to tell them something.

One student, for example, was surprised that she always seemed to get, “At the center of life’s storms, I stand serene.” I think we both realized, however, that given what was going on in her life, it was perfect for her.

From time to time, I encourage students to memorize their favorite affirmations. I suggest that they choose one for energy and strength, and another for calmness and peace, and have both of them committed to memory, ready to use whenever they need them.

I also suggest that they leave the affirmation slips on the table after paying the bill at restaurants, give them to family, friends, hair stylists, etc. Some students use the slips for bookmarks, tape them to their computer monitors, or tuck them in their wallets to find later.

The original versions of the affirmation slips (image placeholder) had all the informa-tion about affirmations, but they didn’t have my studio contact information on them. What was I thinking??!! The newer version (image placeholder) has all of that stuff, so now when students hand them out, it’s not only a way to spread positive energy—it’s also market-ing for Inner Harmony!

I use a special software program for making business cards, but I create a card that has an affirmation instead of the usual information that’s on a business card. The program then prints ten identical “affirmation cards” on one sheet of colored paper. Different such programs work differently, and there are short cuts that come with experience, but that’s it in a nutshell.

After I have printed several pages of affirmation cards for each affirmation, I run them through the printer once again to print the other side, which has my studio info plus some helpful general information about affirmations and how to practice them. (Given the small size of the slips, the instruc-tions are very tiny—people need to relax their eyes to read them, or get their reading glasses.)

Then I cut them on my paper cutter. I suppose I could go to Kinko’s and have them cut, but I guess I like doing things the hard way. After they’re all cut, I fold them in thirds like a letter, with the affirmation on the inside, and put them in the crystal bowl, ready to find their new homes.

Once You Offer a Benefit…

It’s definitely an investment of energy for me to print, cut, and fold about 500 affirmation slips every month. Because of that, I even tried to do away with them at one point. It didn’t work, however; all the students wanted them back. So they’re an Inner Harmony tradition now.

Some of the students, however, want to know why they are still getting fortunes without the cookies. Maybe I’ll add the cookies next year. (Ha!)

placeholder At left are samples of the original version of Fran’s affirmation slips, shown at their actual size. Above is an enlargement of the back side of the version she now uses, showing her explanation about affirmations as well as all her studio information. Below is the easier-to-read affirmation format of her current model.

About the Author
Fran Zabica 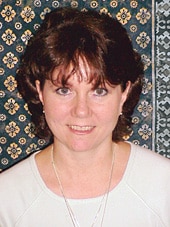