Children can be a force for transformation in the lives of their parents. Some parents, led by their children, rather than the other way around, have even moved to a spiritual community. We often see the Divine working in surprising and mysterious ways, yet seldom in as extraordinary a way as in the story of the Lee family – Simon and Sianda, and their four talented children: Parkle, Paean, Peony, and Parto. 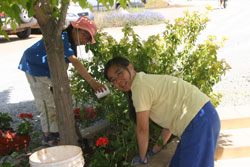 Originally from Hong Kong, the Lees have been a significant presence at Ananda Village, off and on, for almost ten years. Because of visa difficulties the father, Simon, has had to spend much of that time earning his living in Hong Kong — separated physically from the rest of the family, but united with them in spirit (united also, it might be added, via Skype technology!). Meanwhile (as of this writing), Sianda and the four children are residing in the US on student visas. All four children have attended or are attending the Living Wisdom School at Ananda Village; in the process, the entire family has been transformed – perhaps none more so than Sianda.

As Sianda told me, “Unlike other people, I didn’t come to Ananda with a deep spiritual yearning. My parents grew up in China and supported the communist party. They didn’t believe in God. When they were in their 20’s they moved to Hong Kong, not because they were against communism, but in order to keep their jobs with a textile factory. I was raised as an atheist; as a youngster I attended communist schools. My husband, Simon, was brought up in the Christian faith. Eventually, however, he became disillusioned because the people he knew were not living up to the teachings of Christ. By the time we met, he had already left the church.

“Yogananda says, ‘When the disciple is ready, the guru appears.’ Yet when I arrived here, I can’t really say that I was ‘ready;’ I wasn’t searching for truth or God or even for the meaning of life. But both Simon and I were deeply committed to our children’s welfare, and Yogananda used that dedication as a ‘carrot’ to draw us here. After that, the uplifting environment of Ananda did the rest.

How the Lees found Ananda 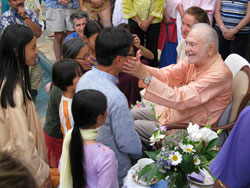 “Before we found Ananda, we had been home-schooling three of our children, according to the Waldorf curriculum, for at least two years. In Hong Kong, home schooling is against the law and we could have been put in prison for it. We aren’t rebels at heart, but we wanted what was best for our children. Still, it was awkward being forced to lie to other people about our children’s education, especially when the children overheard us. We weren’t setting a good example!

Previously, Parkle, our eldest son, and his sister Paean had attended an English-speaking international school in Hong Kong for a few years, but it wasn’t working out. They didn’t fit in there because our family had an unusual lifestyle. For health reasons, we had become vegetarians. We didn’t even own a television. Instead, our recreation as a family consisted of working together in a nearby organic garden.

An important shift in our direction occurred when Peony, our youngest daughter, applied to go to first grade in this same school. Although she is highly intelligent and talented, she unaccountably failed her interview and was not accepted. I believe Divine Mother’s hand was in this, for around that same time a friend of ours shared with us a book about home schooling which he had translated into Chinese. Not long after, amazingly, we also came across a Chinese edition of Kriyananda’s book, Education for Life, and Joseph Cornell’s Sharing Nature with Children. We resonated with the ideas in these books.

Finally, it occurred to us that we could save money as well as the stress of transportation by doing a home school for the three eldest children. (Parto, our fourth child, was still too young.) We ordered books and materials from America for the Waldorf Oak Meadow curriculum. That became the basis of our home schooling for the next two years.

In 2002 and 2003, feeling the need for educational and moral support, we were drawn to attend a yearly conference, held in September, at the Waldorf School in Sacramento. We also connected with a home schooling family in Ohio and planned to see them as part of our trip in 2003. The Ananda Community came into the picture when we searched for ‘vegetarian summer camps’ on the internet. Ananda, we discovered, was only two hours away from Sacramento, California! Accordingly, we made a plan to visit Ananda for just one day in September of 2003.

That proved to be the turning point. Our children visited a few classes at the Ananda School, and that’s all it took: they wanted to come back. Fortunately, the principal was open to the idea. In October, after our time with the family in Ohio, we came back to Ananda. The school staff kindly found us a place to stay for one month so that the children could attend school. 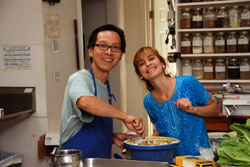 After that we returned to Hong Kong and continued with home schooling, but the kids kept asking, ‘When can we go back to the Ananda School?’ They really liked it.

That’s why, in 2004, we came all together for the summer family camp. Afterwards, Simon had to return to Hong Kong, but the rest of us decided to stay on as long as we could. Our tourist visa only lasted for 6 months. We applied for an extension, but were denied. Then we applied for a religious visa, which took almost a year and a half to process. In the meantime, we were allowed to stay for about 2 years, 2004 to 2006.

In May of 2006, after learning that we had to leave the US because our visas were being denied, we had the opportunity to meet with Swami Kriyananda at a small gathering. It was deeply moving. When I asked him to pray for our family, Swami lovingly replied, ‘I am already praying for your family.’ To Simon, who was here visiting, he said, ‘I want your family to live here.’ Simon felt Swami was an old, dear friend, even though he had scarcely met him.

In 2007, the whole family, except for Parkle, traveled from Hong Kong to India for a month on pilgrimage. Parkle was able to return to Ananda on a student visa. While in Gurgaon we had the blessing of meeting with Swamiji for over an hour. We brought him a tea set and some high quality Chinese tea. Our two daughters played the violin for him, and Simon gave him a massage.

While in India, we worked out a temporary employment opportunity for Simon that allowed us all to stay in the US for the next 2½ years. Then, in January 2010, after returning to Hong Kong, we discovered that all our children were eligible for student visas as international students at the Ananda School. I, too, was counseled to apply for a student visa so that I could accompany them. Since August of 2010, I have been able to live at Ananda while attending the local Sierra College as a full-time student. Simon still resides in Hong Kong, supporting the family by his business there.”

Are we Chinese or American?

“Our children love Ananda, but being an ‘international student’ can bring up identity issues. They look Chinese, but don’t feel Chinese inside. Yet they are not really American either, since they always have to deal with visa challenges, and at American colleges they are not eligible for financial aid. ‘Who am I?’ they ask. ‘Where is my home?’

For instance, after graduating from Ananda high school, and completing one semester at Ananda College, Parkle felt he had to return to Hong Kong to get in touch with his Chinese roots. Simon sensed he was in crisis — where did he belong? Simon accompanied Parkle to China in search of a university, but no university would accept him. His academic records were good, but his knowledge of the Chinese language was not up to their standards. During the current year, 2013, Parkle has been attending a college in Pennsylvania. Just recently he has decided to return again to Hong Kong.” 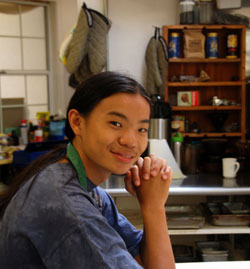 Sianda feels it’s fortunate that most of her children are not overly bothered by questions of identity. “We are pioneers here. When I was young I lived in Hong Kong and had a strong identity as a Chinese person, but that didn’t really teach me anything. It was a normal and boring life! Everything is a mixture of good and bad aspects. Swami Kriyananda often quotes the Indian saying, ‘It is a blessing to be born into a religion but a curse to die in one.’ One could say that about almost any positive self-definition.”

How did Sianda make the transition from growing up in a communist family to becoming a disciple?

“When I first arrived at Ananda it was strange to see pictures of the Masters everywhere. I couldn’t understand the Sunday Service at all. But I was deeply touched by the music and by the people living here. They were happy and friendly; they accepted us as family. I started reading the books, especially Kriyananda’s books. Gradually I came to accept that this was my path. At one point my mother came here for a visit and enjoyed it very much; needless to say, we avoided the subject of religion!

People always tell us that we have sacrificed a lot for our children, but to me it doesn’t seem like sacrifice since there have been so many benefits. You can look at it either way. Whenever you lose something, you also gain something.

For example, I am usually miserable when the school term starts because I don’t really want to go back to school. I would rather spend the time with my family. But in order to stay here with the children, I have had to adopt the schedule and lifestyle of a student. As soon as I start attending classes and doing homework, the house becomes messy and I don’t have time to cook nice meals for the kids. At first it’s hard, but gradually I accept it and just do the best I can.

The up side is that the children help me more, because they understand that we are all busy. They cook and do chores; they even organize themselves since I don’t have much time for them. As a result, they are mature and independent; people comment on how confident and self-directed they are. Without even intending to, Simon and I have become role models for our children on how to be productive and happy.

I never could have foreseen that my life would turn out this way! What happens is not always what I would have chosen, but I have faith that it is for the best.”

The Lees’ remarkable story shows that true education, “education for life,” goes far beyond the classroom. It also reminds us that the bonds of spiritual friendship and discipleship are much deeper than superficial cultural differences. Paramhansa Yogananda described friendship as a great universal force. A person who is spiritually attuned to you may be living on the other side of the world, yet when the longing of the soul is strong enough, the magnetism of friendship will draw you together.

About the Author
Nayaswami Nalini