December, 1878: Next to the convent school run by the Sisters of Loretto in Santa Fe, New Mexico, is the chapel of Our Lady of Light, at that time complete except for any means of access to the choir loft two stories up. Designed, at the Bishop’s insistence, by an architect in Paris on the model of Paris’s Sainte Chapelle, the new chapel’s physical construction has defied the best efforts of a succession of master carpenters to build a stairway for the choir to climb from the ground floor to the choir loft. There simply is not room for the supports necessary to such a structure.

Mother Superior Magdalene and her Sisters of Loretto have prayed earnestly since the inception of the building process, and with special intensity in the weeks since the seeming impossibility of a stairway has so effectively blocked completion of the chapel. Deeply devout, Mother Magdalene has also a hard-nosed practicality, both in leading the nuns in her charge and now in dealing with the challenges inherent in the building of the chapel. No indulgence in wishful thinking does she allow herself as she humbly bears the responsibility she feels for seeing school and building project come together to serve their heavenly purpose here on earth.

Four carpenters have already come, each optimistic and assured; four have left baffled and discouraged.

And so it is that when a fifth carpenter appears, Mother Magdalene directs a young nun to send him away. Four carpenters have already come, each optimistic and assured; four have left baffled and discouraged. Why should this new arrival be different? She herself is off on a mission of mercy to Santo Domingo Pueblo to serve the afflicted in the epidemic raging there. When she returns, she will meet with this latest carpenter—but probably, she thinks, only to send him away again.

While the mother superior (and her pragmatic approach to life) are away, the fifth carpenter continues to arrive day after day, his gentle donkey laden with what seem odd scraps of wood. The carpenter is tall and dark in complexion, with a full dark beard and an open and smiling face. The young nuns do not mean to disobey Mother Magdalene’s instructions; they are simply too kindhearted to send the carpenter away, and so they have accepted his presence, and even offered him payment for his work. All these offers the man gently refuses. About himself, his homeplace and family, he says nothing. Only to little Manuela, a Native American girl, mute from birth though with good hearing, does the carpenter speak. Always smiling, steadily he works, each day using what his donkey has carried.

It is Christmas eve when the mother superior, her service in the epidemic completed, wends her way home over the snowy landscape. As she approaches the chapel she sees soft light playing on the snow outside. Her heart she feels warmed by an overflowing joyfulness pouring out from the radiant faces of the nuns, and of Manuela, as they surround her in welcome. Eagerly the sisters lead Mother Magdalene into the chapel, now bright with the light of many candles. 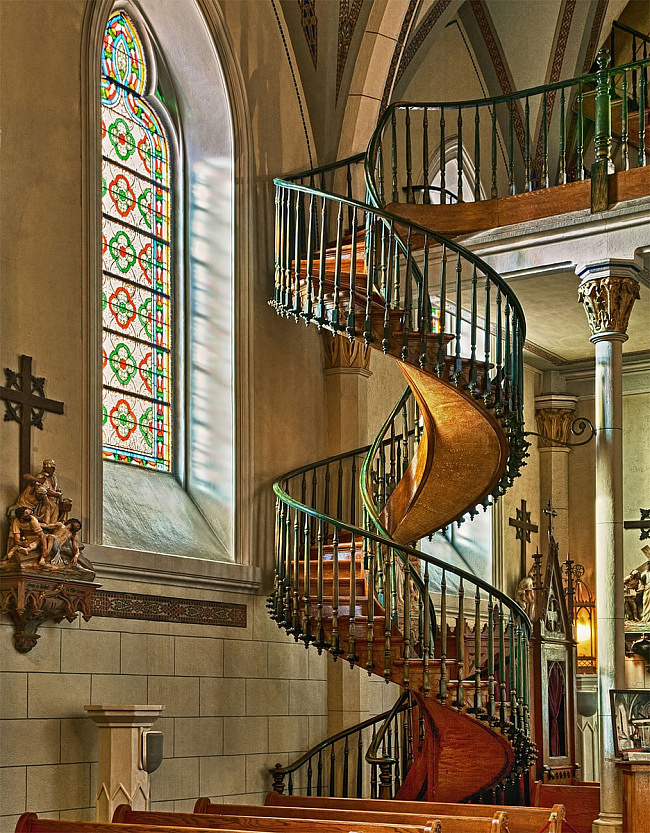 There before her eyes is the stairway, a perfect double spiral from floor to choir loft. With no visible means of support, the stairway seems to float in air: thirty-three steps, one for each year in the life of Lord Jesus.

When Mother Magdalene asks about the carpenter, the nuns have few answers, only that he came each day, his donkey laden with scraps of wood, that each day the stairway rose higher until, just the day before, it reached the choir loft, that the carpenter then led his donkey away and was seen no more. His name they know not. Only at this moment does Manuela step forward, her throat working as she struggles to speak. With great effort, she gives forth the first word of her life—“Jose.” And with this one word, this pure-hearted child breaks the silence of a lifetime and becomes the channel through which Mother Magdalene, her soul so long hemmed in by the burden of responsibility, begins finally to understand what little Manuela in her innocence has perhaps known all along—that God does come to us in our need, and does so in any way He chooses. Weeping with joy, Mother Magdalene sees that, in answer to their prayers, by the grace of God, a carpenter named Jose—Joseph the carpenter—has come to their chapel and into their hearts. Christmas day is breaking, and in every devout heart the Christ child is born anew.

The miraculous stairway still stands in the Santa Fe chapel. The wood used is a type of fir nonexistent in New Mexico. Fastened only with wooden pegs, the stairway is fitted together with such exquisite precision that not a tremor is felt as one ascends.

As I ascend the spiral stairway of wakefulness,
I will whisper:
God! God! God!