How many of you out there have experienced or are experiencing difficulty in expressing your spirituality through the unwitting oppression of a loved one?

It is not unusual for what may seem the strongest of relationships to break down when only one of the party discovers the real mission in life: To seek ones own divinity. I’m sure my experience will touch the hearts of some and perhaps even offer a little solace and inspiration.

When I began meditating, some years ago now, my husband, Michael was very sceptical about its merits and used to tease and jibe that I was up to some jiggery-pokery witchcraft. I used to meditate with 2 friends and he named us ‘The Three Witches’. Still, despite his teasing, he left me to it. It wasn’t until I discovered Raja Yoga and he realized I was moving in a new and purposeful direction outside of his understanding that he began to get more than a little twitched.

He recognized changes in me. I was more comfortable in my own company; less interested in worldly entertainment, and reading books that had ‘God’ in the title. I was accused of becoming a religious fanatic. As my time spent in meditation increased it became apparent that my husband deeply resented his self-made exclusion from this area of my life. Rather than eagerly anticipating my meditations, as I would surely have done, I began to dread the moment when it was time to meditate because I knew that it would trigger animosity in my husband. I began meditating in secret at night, all the while praying that God give him understanding and acceptance of me as I am and what I aspire to be.

The crunch came when I was accepted for initiation into Kriya Yoga. This meant a trip to Ananda Village in California, my chosen venue, and time spent away from my husband. We had rarely been apart. When I discussed it with him I remember thinking it strange that he didn’t object in the slightest. I invited him to come along, but he declined, which didn’t surprise me, yet I wanted him to know I was not pushing him out.

I knew it had gone too well, however. A couple of weeks later, when he had time to brood on my trip away, he began verbalising his concerns; valid for him. In his ignorance I was accused of getting swept along into something dangerous and that Ananda was a cult; that I was naïve and vulnerable and was being brain-washed. My husband would not take the trouble to research the website or read any of Ananda’s literature, which may have allayed some of his fears.

I recognised that my husband’s insecurities were all born of his attachment and perceived need of me. A love with strings that meant he lived in fear of losing my love. He thought I would run away to this ‘cult’. I knew he felt alienated from a relationship were we had once shared the same worldly interests. He said at one point that I was moving too fast and that I should slow down and wait for him. I couldn’t and wouldn’t do that. No one has that right to ask that of anyone. He resented the change bitterly, was terribly jealous of the time that realizing God demands, yet he loved me dearly the only way he knew.

All throughout, my devotion was strong and I knew I must not give way. I stood my ground – new territory for me – and stalwartly kept the beacon burning for God in the firmness of my resolve. Through this test I gained such an inner strength that I can see that my husband has been my greatest blessing. That he was Guru teaching me to make a stand for what I perceive as Truth. I, in turn was my husband’s test.

On my return from the U.S, now a kriyaban (practitioner of Kriya yoga), my husband feigned disinterest in the whole trip and sneered at the photographs. I didn’t push the issue. I continued praying.

Then the excuse I needed to realize a life-long desire to go to India arrived. My 50th birthday! My husband had no desire to go there, but out of love for me was happy to ‘for my birthday’.

I announced that I would like to visit the new Ananda community in Pune and that I wished to take holy vows of renunciation: The vow of Tyaga, meaning I would become a tyagi (married monk) of the Nayaswami Order of Renunciates, founded by Swami Kriyananda. Poor Michael! His face told all. He thought I had finally lost my marbles, yet despite this he surprisingly didn’t raise any objection. I asked him would he like to read the vow. He declined the offer, but we went to India.

My previous blog, ‘The Land Where Saints still Tread’, tells the tale of our experience in Shirdi. The blessings my husband received changed him, yet he does not recognize that he has.

Two days following the Shirdi experience we went to Pune. I didn’t know until the day if he would accompany me to the Ananda community. Curiosity got the better of him. My husband was witness to my vowing, before God and Guru, my renunciation of the world! Never did I think I would see the day he was actually present at such a sacred and spiritually significant ceremony. He was even receptive to Nayasawmi Jaya when asked if he could offer him a blessing. 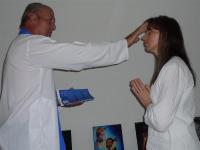 Nayaswami Jaya giving diksha (blessing) after I had made my vow

It was wonderful visiting the new land on which the community is being constructed. We had a great day. We were given a tour, met Nirmala and Dharmadas – the spiritual directors of Ananda India – I meditated with other wonderful gurubhais (fellow disciples), we had lunch and had a look round Swami Kriyananda’s new house. 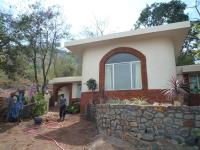 My husband even befriended one of the devotees who was tending the new vegetable garden and decided, in the midday heat, to give her a hand with the digging! 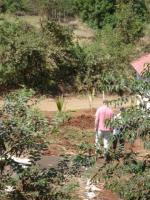 Michael working in the community garden

He thoroughly was swept along in the vibration and enthusiasm of all present and he said that he would like to return and see how the site is coming on in a year or 2. In visiting Ananda, Michael realized that Ananda members are wonderful and sincerely devout people that don’t have devils horns and chains with which to ensnare unsuspecting women! 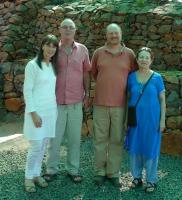 Myself, Michael, Dharmadas and Nirmala

Discussing the vow with him that evening, Michael bravely confessed to me he actually liked the part of the vow that pertained to partnerships:

…I will view my partner as a channel of God’s blessing, guidance, and strength, and will strive always to be a similar channel in return.
I will endeavor always, through the love and respect I feel for my partner, to reach out in love and service to all humanity…

I could have wept for joy, but contained myself for fear of his embarrassment. I just nodded calmly and smiled, thanking God for this change.

Although my husband still intellectually expresses no interest in spirituality, nor any real understanding of mine, what has transpired – and I believe through prayer and blessings – is an inner transformation; an intuition that has made his love more expansive that now enables a tolerance and acceptance of my own transformation. His actions reflect what is in his heart, which his head has still to acknowledge. A truth has been recognized, that to allow me to be who I am, to allow me to move outside the box he had placed me in, has actually brought us closer together, rather than pushed us apart.

His transformation would not have happened in this way had he not been open enough to join me in my trip to India, even if only instigated by mere curiosity. Only God, however, knows how that seed of curiosity was planted!

I made a stand for what I perceive as Truth. I demonstrated to Micheal a faith in God such as he has no option but to accept will never falter. He recognized he had a choice to either move with me, at his own pace, or to stand on the side line watching me walk on. We cannot hope to instigate change by trying to impose our will on other people. We can only ever change ourselves and calmly watch the repercussions.

Now?.. my husband will look at the clock and remind me it’s my meditation time. Together we are visiting Ananda Assisi, in Italy, this summer. He also wishes to accompany me to Ananda Village next year and said he might even listen to a talk or 2!

My dear husband’s latest gesture of an expanding love comes in the form of an alter he has built for me in our spare room. 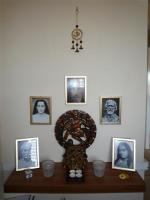 I am told it is only with very good karma that a person will find a partner that is devout. Two years ago I could never have dreamed for such blessings; that my husband’s love would become less selfish and more divine in nature, and he doesn’t even realize…or does he?