My story begins in August 2004 when I suffered severe angina pains. Angina pains were not new to me—I was first diagnosed with heart disease seven years before, in 1997.

Angina is caused by a blockage in the heart’s arteries. After my first attack I underwent angioplasty—a procedure that involves inserting small metal tubes called “stents” into the blocked arteries.

Can we still go on pilgrimage?

The timing of this new attack couldn’t have been worse. My wife and I were scheduled to leave on the India pilgrimage sponsored by Ananda Assisi on February 11, 2005. We were very much looking forward to meditating at places associated with the life of our Guru, Paramhansa Yogananda, and strengthening our spiritual lives.

My doctor assured me that the attack was not life threatening, but I needed to know whether another angioplasty was necessary, and if it could be scheduled in time for us to go on pilgrimage. Since my wife and I live in England, this meant seeing a heart specialist at the local hospital. I urged my doctor to schedule a hospital appointment as soon as possible.

Three months later—November 2004—I learned that my doctor had not scheduled the appointment. With the Assisi pilgrimage only two months away, I got busy and made daily telephone calls to the hospital.

I finally obtained an appointment with Dr. Sarkar, a cheerful, young cardiologist from Calcutta. Tests showed that I needed another angioplasty. The procedure was scheduled for January 27, 2005, two weeks before the start of the pilgrimage.

A few days later I sat in the meditation room of our home and prayed: “Why do I have to suffer again from heart disease, especially when I am about to go to India on pilgrimage?” Silently gazing at a favorite picture of Yogananda, I heard the answer: “This is how we learn.”

“But what am I supposed to learn from this?” There was no answer.

For some time however, I had been considering the possibility that the causes of my heart disease, or at least some of the symptoms, were one and the same as the obstacles I faced in my spiritual life. My life pattern was one of working with tension and anxiety “to get things done,” while ignoring strong emotions that simmered just below the surface— especially anger and fear.

I had retired from full-time work and was now meditating, but I had carried into my new life many tension-generating habits that interfered with my ability to meditate deeply. Indeed, it was during a period of meditation teacher training at the Ananda center in Assisi, Italy that the most recent angina attack occurred.

I was beginning to understand that I needed to develop inner calmness by nurturing contentment. The blockages in my heart’s arteries were less likely to cause angina or fibrillation if I could keep my heart calm.

The heart needs to be protected

A week or so later, while checking my e-mails, I experienced another heart incident—this time an episode of fibrillation. This was not unusual; I had experienced fibrillation in the past and took medication to control it. The condition becomes critical only if it triggers angina.

In the midst of the attack I said to my wife: “The heart needs to be protected and listened to.” The fibrillation stopped as soon as I said these words. Commenting on this, my wife said: “The heart responds to what’s true.” In other words, my acceptance of the heart’s reality, or “truth,” quieted the heart and stopped the fibrillation.

It was becoming apparent that to develop inner calmness, I needed to listen more sensitively to what my heart was trying to teach me. I began to watch how my heart responded to the slightest emotion.

We don’t want your catalogue!

As I voiced these thoughts to myself, I became acutely aware of a slight feeling of pain in my heart. I wasn’t particularly angry, simply frustrated.

So I posed the question, “What would the heart ‘like’ to have heard instead? What manner of dealing with the problem would have been ‘kinder’ to the heart and not resulted in pain?” I focused on the heart and tried to feel its vulnerability.

From somewhere beyond my mind came the words: “Thank you for your catalogue. We’re sorry you’ve not been able to sell us anything but we shop elsewhere. We’d like for you to cross our names off your list and to offer the catalogue to someone who can make better use of it.” I wrote down these words and pinned the note to the catalogue.

Soon after, I made another discovery involving what I called my “yeah-buts.” My wife would suggest something and I would agree broadly but immediately think of an exception or possible difficulty and say, “Yes, but suppose . . ..” I would then feel a slight change in my heart, as though a good flow of energy was suddenly blocked.

It soon became obvious that my “Yeah-buts” were a subtle way of saying “no” to life and of blocking positive, life-affirming possibilities. Becoming more aware of this helped me drop this way of thinking, which eased my heart symptoms.

The heart responds to every thought

I was discovering that the heart is a sensitive instrument and responds to the feelings enshrined in every thought. Ignoring its slightest whisper interrupts its free flow of life-giving energy.

The most harmful thoughts usually reflected strong desires and attachments—something I wanted to make happen, or prevent from happening, in the external world. By contrast, non-attachment, or acting without desire for the fruits of action, nurtured inner calmness.

By now I was much more in touch with the inner, intuitive part of myself. I was learning not to judge whether my thoughts were good or bad, but simply whether they were pleasing to my heart. I made a list of all the attitudes and qualities that were unfavorable to the heart— self-pity, doubt, suspicion, worrying about money, anxiety over getting things done, etc.

Since I tend to be a compulsive worker, I resolved to sit down for a minimum of one hour each afternoon and savor total peace. During this time I would relax, read from books by Yogananda or Swami Kriyananda, or perhaps meditate an additional hour. Whenever I did this, my heart symptoms eased.

The angioplasty procedure took place as scheduled. Throughout the procedure, and especially during moments of pain, I tried to focus all of my energy inwardly. I pictured Yogananda, chanted AUM, and visualized energy and light being channeled to my heart. More vividly than ever, I felt the reality of Yogananda’s words:

All methods of healing—physical, mental, and vital—become limited without knowing that the unlimited power of God is working behind them, and that His almighty power of healing is sufficient by itself. (Praecepta Lessons, 1935)

With a quieter heart and a deeper receptivity to the many blessings of the experience, my wife and I went on pilgrimage. My heart disease had ceased to be my adversary and had become my friend, awakening me to a greater awareness not simply of the health of my body but, more important, to God’s presence within.

Why did I have to have an angina attack just before we were leaving for the pilgrimage? Because this is how we learn.

Through heart disease, I was finding a better balance between head and heart, between “head-strong” ego-based behavior and my deeper Self. I now remain ever alert to the danger of the head “taking over.”

Chris and his wife, Evelyn, live and serve at the Ananda Assisi community and guest retreat.

About the Author
Chris Clarke 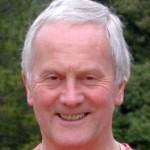