When I first became a spiritual seeker, I often participated in spiritual retreats where I experienced blissful meditations. Returning to my everyday life was a different matter altogether, however. I usually fell back into old behavioral patterns and was often quite miserable.

What helped me most during the “in between times” was to call on God and Guru’s grace in times of need by doing japa. When my mind became negative or fearful I would do japa by repeating a mantra, and my negative thoughts would usually dissolve.

In stressful situations like driving to out-of-the-way locations, which is often necessary in my job as a family court attorney, doing japa would calm me down and I was able to find my destinations.

Receiving Kriya Yoga initiation in 2006 was an important turning point in learning not to compartmentalize my life. Since then, my meditations have become deeper and I find it easier to remain centered in the midst of life’s storms.

As a result, I’ve been able to experience first hand the truth that all life situations, and not just the time spent in meditation and prayer, are opportunities for spiritual growth.

A year after receiving Kriya Yoga initiation, I went through one of the most challenging times in my life as an attorney. I had been appointed by the court to represent a woman whose teen-age daughter had been removed from her care and placed in foster care.

This woman was very disturbed emotionally. Initially, she spent most of our meetings berating me, threatening either to fire me or to report me to the state bar association (she couldn’t fire me since I was court-appointed), or fixating on fears not based in reality.

A year and half into my relationship with this woman, I felt inspired during one of her tirades to gaze at her at the point between the eyebrows (the spiritual eye), and to think of her as a child of God. The effect on me was immediate.

Despite her negativity, I suddenly felt immense compassion for her—and for myself. I realized that in many ways she was my teacher. She had fears that were familiar to me—fears of not being loved, of being rejected by society, of not being appreciated, of being misjudged, of not being good enough.

The differences between us were only a matter of degree. She allowed her fears to overwhelm her to such an extent that she was unable to function. I, on the other hand, was learning to control my mind and transcend my emotions through the practice of meditation, prayer, and japa.

That was a turning point in our relationship. After that, I saw every phone call and every meeting with her as an opportunity for inner growth—for me to remain centered and compassionate no matter what she said or did, and to listen more intuitively to how best to help her.

I learned not to insist that she spell out her exact positions on the legal situation with her daughter—something that was extremely difficult for her to do. Instead, I encouraged her to express her feelings and emotions, which turned out to be far more productive.

I learned to listen to her, to translate her feelings and concerns into coherent legal positions, and to present them in court in an organized manner. She felt that she had been heard and was grateful for that.

She even seemed healed by the process. She was more relaxed during our meetings, less anxious. Her tirades became less frequent and less “dramatic.” At one point she even invited me to join her at a dinner at her church, which was a huge demonstration of gratitude and kindness on her part.

At the end of our 3-year attorney-client relationship, she no longer perceived me as someone who might hurt or abandon her but as an ally, someone on her side.

The biggest step forward in my progress toward seeing my spiritual and everyday life as one came in 2008 when I was hit with a mysterious illness. Just a few months earlier I had been enjoying long hikes with my dog, meditating and doing yoga postures regularly, and carrying a heavy family law caseload.

Suddenly I was struggling with dizzy spells, bodily weakness, and a sense of being totally overwhelmed by any minor demand on my time and attention.  In less than two months, however, 15 weekend guests—students and teachers from the Ananda Institute and other Ananda friends—were due to arrive.

One week before their arrival, a blood test disclosed a vitamin B12 deficiency. I wondered: how fast would the vitamin B12 pills make me feel somewhat normal again?

Opening to God and Guru

I considered canceling their visit—the events planned for the weekend included a kirtan, Sunday Service, and a hike and visit to the local Buddhist Stupa Park. How could I, in my state of total fatigue and discomfort, get the house ready, plan meals, cook, set up sleeping arrangements, and look somewhat happy to see them when they arrived?

Though weakened by illness, I was nonetheless determined to find a way to be ready for my guests. After meditating, I surrendered the situation to God and my Guru, Paramhansa Yogananda, and asked them to take charge of my body and flow through me so that things would be ready for my friends’ arrival.

I curtailed my work schedule as much as possible and each day managed to get one thing done.  I was pale and eight pounds thinner the day my Ananda friends arrived, but the house was clean, the food was ready, and I felt blissful to see so many bright faces at my doorstep.

A marathon of joy

The weekend was a marathon, but I felt so much joy I could barely eat or sleep. My home vibrated with music, laughter, singing, love, and devotion.

I have several musical instruments in my house but I am not a musical person and cannot play any of them. During that weekend, those instruments heard beautiful tunes as the students played Swami Kriyananda’s music all day long.

By Monday morning all my guests had left, and I had a few days to rest before the arrival of another weekend Ananda guest and more Ananda events. My body was still somewhat weak, but once again everything got done.

During the Sunday evening satsang in my home, the visiting Ananda minister spoke about energy and quoted Paramhansa Yogananda’s statement that one small gram of human flesh has enough energy to light up an entire city. We did Swami Kriyananda’s Superconscious Living Exercises and my body felt refreshed. What most amazed me were my vitality and readiness to serve.

Many blessings; many lessons

What did I learn from these two experiences? I learned that if I put total effort and willingness into a project, not only do I open myself to God’s wisdom and guidance, I also receive the strength I need to serve.

I learned also that there is no difference between the “spiritual” and the “mundane” when I perceive myself as God’s instrument and am willing to do whatever needs to be done. My willingness opens the door to the infinite source of all energy and strength.

Though I had heard and read many times, “God is the Doer,” this was my first experience of what it meant to act with the sense that God was acting through me. Previously, I had always felt that I was the doer, even when thinking of God during activities or consciously trying to serve God through others.

What a difference it is to experience the truth that God is omnipresent, all-pervasive, and ever-ready to pick us up when we stumble or fall!

Everything is an opportunity

The blessing I most cherish is the growing realization that all situations in life are opportunities for inner growth. It was easier perhaps for me to learn this lesson when the outward activities were of a spiritual nature, like the Ananda events I hosted in my home, rather than my daily mundane duties.

But it has become clear that what’s important is not what I do but being in a state of surrender and alignment with the divine will.

My health and strength have returned. Life’s many duties have become simpler and much less exhausting. I continue to enjoy spiritual retreats but I also enjoy my daily spiritual journey. Everyday I pray that I become a better devotee, more surrendered to the divine will, so that God can flow through me in all that I do.

A spiritual seeker since 1991, Daniella Ferrari is currently the leader of the Ananda Meditation and Book Study Group in Sedona, AZ.  In her work as a family law attorney, she represents indigent clients and abused and neglected children. Clarity Magazine articles can be printed in "text only" format, using your own computer.

About the Author
Daniella Nitya Ferrari 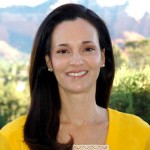