On September 18th in Boston, 45 to 50 souls celebrated the 90th Anniversary of Paramhansa Yogananda’s arrival in Boston from India.

Nayaswami Devarshi and Maria from Ananda Village shared this memorable weekend with us. My heart is overflowing with joy and gratitude to Yogananda for the great gifts of Divine awakening he brought to us through his grace, teachings, books, and his living disciple, Swami Kriyananda. Swamiji gave a Skype virtual satsang (fellowship) with us Saturday night in which he shared the way to experience bliss and many other blessings. He was filled with Master’s presence and it was palpable to all of us.

(Audio and video of the satsang is at the end of this post).

Afterwards someone who had never seen Swamiji before commented, “I didn’t know what the big deal was about Swami Kriyananda and now I see he’s completely genuine”.

We meditated in Trinity Church where Master would go to play the enormous organ there. We also enjoyed the Boston Library where Master found the man who had written him the anonymous letter saying Christ never existed. 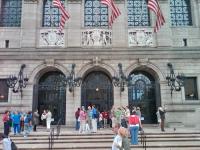 Divine Mother led Master to the man seated in the library and he tapped the man on the shoulder. “Why did you send me that letter?” Master asked. The man replied, “How did you know it was me?” Yogananda replied, “The same One who told me where to find you also has shown me Jesus was a true Christ and did live!”

We were able to meditate in the Chapel at the Boston YMCA where master had checked in exactly 90 years before on the same day! Cathleen Elliott from New York took her discipleship vows there with Nayaswami Devarshi and Maria. This sacred moment is captured in the photo. 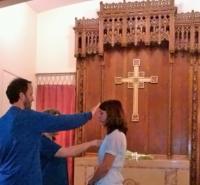 I must also add how blessed we were to have Nayaswami Devarshi and Maria with us. I have never before been stirred so deeply by a talk on the Guru disciple relationship! Devarshi and Maria shared essentially how there is NO WAY OUT OF DELUSION WITHOUT A GURU!

The entire Autobiography of a Yogi is about this subject. The first and last sentences of the original book are about it and most pages in between are essentially sharing the same message. Devarshi mentioned Christ asking for baptism by John the Baptist to “fulfill all righteousness” as John had been Jesus’ guru in the incarnation when he was Elijah and Christ was Elisha.

Class with Maria and Devarshi

Maria spoke about Kashi who was 12 when he died as a student at Master’s Ranchi school. His one request was that Master find him in his next life and make sure he was with a true guru.

We’ve read about how Master promised and then had to fulfill his promise by finding Kashi’s soul in an embryo of a pregnant woman’s body in Calcutta. There were many other examples of our own line of gurus needing the guru’s assistance in order to heal or as in Master’s case, giving a lecture in English to his companions aboard the ship to America.

The Guru’s grace is ultimately what transforms us and prepares us for God realization if we attune ourselves to him and that is the Divine Promise. Thank you Gurudeva Paramhansa Yogananda for returning again and again for “one stray brother left behind”!

Audio of Swamiji’s Satsang with the Pilgrims:

Audio of Swamiji’s Satsang with the Pilgrims, 23 minutes 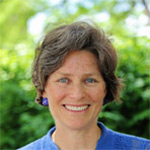