Although written for Ananda Yoga teachers, this article will interest any serious practitioner of yoga.

I’m sometimes asked, “Where does Ananda Yoga come from? Paramhansa Yogananda didn’t teach asanas, did he? Did he even do them himself? What’s the story?” I can certainly understand why there would be confusion, so I’d like to clear it up in this article.

I decided to address this point now because of a recent book: The Great Oom, by Robert Love, who purports to trace the origins of yoga in America, focusing a great deal on one person (not Yoganandaji) whom the author rather disparages while also crediting him with bringing yoga into public view. I have not read the book, nor do I intend to, as I do not trust its accuracy now that I’ve read what it says about Yogananda. Among its inaccuracies (as an Ananda Yoga Teacher Training graduate kindly brought to my attention) are two mentions of Paramhansa Yogananda—including alleged viewpoints—that are (a) relevant to Ananda Yoga, and to the spiritual tradition of Paramhansa Yogananda generally, and (b) patently false.

Here are the book’s two mentions of Yoganandaji: At one point, the author writes that Yoganandaji was “uninterested in hatha yoga—disdained it, actually—and never taught it.” At another point, he writes: “Hatha yoga was viewed by Yogananda and other swamis as a low-class, mumbo-jumbo waste of time that had long fallen out of favor even in India.” Both of these statements are simply untrue; I’ll address them in order.

Yogananda did not disdain Hatha Yoga

It’s true that Hatha Yoga was not Yoganandaji’s main pursuit. He practiced it as a boy, but even then gave primary emphasis to meditation, the central technique of all Yoga. It wasn’t long before he abandoned asana practice altogether. He also said that his Energization system is “better than the asanas” (comparing their relative value in the spiritual quest).

Nevertheless in The Essence of Self-Realization, Swami Kriyananda quotes him as saying:

“Hatha Yoga is a wonderful system. The body, moreover, is a part of our human nature, and must be kept fit lest it obstruct our spiritual efforts. Devotees, however, who are bent on finding God give less importance to the yoga postures. Nor is it strictly necessary that they practice them.”

Furthermore, in his own Autobiography of a Yogi (original version), Yoganandaji wrote:

“Hatha is useful, and produces spectacular physical results, but this branch of yoga is little used by yogis bent on spiritual liberation.”

So “useful, but not essential” is fair description of Yoganandaji’s perspective on Hatha Yoga postures, but “disdain” is just plain wrong. 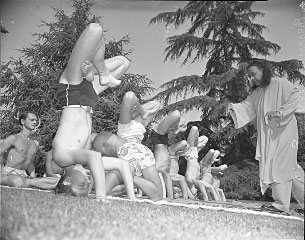 Paramhansa Yogananda guiding monastic disciples in Padma Sirshasana (Headstand in Lotus Pose) and meditation. Swami Kriyananda is the young man meditating behind the others doing the asana.

Although Yoganandaji did not teach public Hatha Yoga classes, he did teach it to some of his male monastic disciples, whom he encouraged to practice it if they felt it beneficial. (See accompanying photos.) The phrase “if they felt it beneficial” is key. He urged his disciples to spend as much time as possible meditating. For those who found asana practice to be an aid to meditating longer and/or deeper, he approved of its practice. And in any case, Hatha Yoga, correctly practiced, is beneficial both physically and spiritually. (Interestingly, he did not encourage his female monastics to do asanas. Perhaps it was that he wanted to help his young male disciples re-focus their restless energy—something which, at least in those days, didn’t seem to manifest itself as strongly in the women.)

A mumbo-jumbo waste of time? No!

Therefore, could Yoganandaji possibly have felt that Hatha Yoga was a “low-class, mumbo-jumbo waste of time”? Certainly not. If he had felt that way, he would not have called it “useful” or “a wonderful system.” He would have discouraged his close disciples from practicing it. He would not have called upon Swami Kriyananda (as he frequently did) to demonstrate the postures for his (Yoganandaji’s) guests. And Swami Kriyananda, who has dedicated his life to expressing clearly and accurately his guru’s teachings, would not say—as he has said—that he views Ananda Yoga as “Master’s system, not mine.”

Out of favor in India?

Finally, it is true that Hatha Yoga (and yoga generally) had long been out of favor in India before the late 20th century. Both are coming back into favor now, but earlier in that century (the period on which the above-mentioned book focuses), it was certainly true. Even today yoga has not regained most of its ancient luster in the public eye in India. However, there was—and still is—a perfectly good, non-yoga reason for that: the British occupation of India.

The British had a supremely effective strategy in subjugating the Indian people (if indeed it was even a “strategy” rather than simply an instinctive Western reaction to what they saw in India). Perhaps they realized, as history as often shown, that repression often vitalizes a spiritual tradition rather than causing it to disintegrate. Whatever their reasons, rather than forbidding the practice of yoga or other forms of Indian spirituality, they simply sneered at the Indian traditions. No doubt the subjugated Indians’ esteem for Yoga, Ayurveda, Jyotish (Vedic astrology), Hinduism—in short, all of the ancient Indian teachings—had already been weakened through the centuries of Muslim domination (and forcible conversion to Islam) in India. It is easy to see how the sneering attitude of the British, the “next” conquerors of India, would have been enough to crush whatever remained. Even today, many Indians—even some Indian scholars—view their own traditional teachings as legitimized only when they are re-introduced into India by a Westerner! This is changing, certainly, but the change is not yet complete.

In short, then, the above allegations in The Great Oom are simply untrue. Although Yoganandaji upheld the long-established tradition of meditation being the central and highest practice of all Yoga, he not only respected, but encouraged, the practice of Hatha Yoga for those who found it spiritually helpful.

He did not formulate Ananda Yoga as a well-defined system; it was Swami Kriyananda who later codified Yoganandaji’s teachings and viewpoints into the Ananda Yoga system, complete with asana affirmations that reinforce the uplifted states of consciousness that each asana promotes. But as I mentioned earlier, Swamiji has said that Ananda Yoga is “Master’s [Yoganandaji’s] system, not mine.” This is why meditation is central to Ananda Yoga, with asanas, pranayama techniques, and the Energization Exercises playing important supportive roles. And it’s why Ananda Yoga Teacher Training emphasizes the practice and teaching of all these techniques. Together, they help the practitioner draw upon the divine power that alone brings self-realization and lasting happiness. (Click here for an article giving a more-detailed explanation of what Ananda Yoga does and does not encompass.)

This article was written for the Ananda Yoga® Teacher Association newsletter.

Learn more, or find a certified Ananda Yoga® teacher near you.

About the Author
Nayaswami Gyandev