“Mountains remote and still, hint at higher worlds unseen. So may our lives be, soaring and serene.” — Swami Kriyananda, in his song “Channels”.

Listen to the song:

The mountains in Yosemite are magical. One of the most grand and mystical ones is called Half Dome. It’s as if God made a slice with His knife, making it look almost flat down the front.

On our vacation in Yosemite, we hiked my favorite trail to North Dome. The four mile hike ends with an incredible view of Half Dome as well as Yosemite Valley to the right and mountain peaks off to the left. You can sit near the end of North Dome and gaze at the entire facade of Half Dome, as you see in the photo.

My husband Paalaka and I were there for around 3 hours. I was very inward and asked my guru Paramhansa Yogananda to help me commune directly with the rock. This process is called “The Sky and Earth Touched Me“. It felt like I was the rock and the rock was me. It was a deeply healing experience.

It’s difficult to put into words, but I could tell that the serene quality within the rock was very much alive. It seemed to transfer its serenity to me. It felt like the rock and my molecular structure were the same. Yogananda said that he remembered his lifetime as a diamond. I can’t say I can understand that, but what I experienced at Half Dome could be an inkling that “we are a part of all that is,” as it says in Ananda’s Festival of Light.

Just as we cannot fully see the top of a mountain when we are not yet on the top, we cannot often see our own potential for complete serenity or feel God’s presence within ourselves. When we practice meditation deeply, especially in nature, we aspire to become so still that we merge with God. I felt a glimmer of this potential on Half Dome that day.

May your meditations and experiences in nature be “soaring and serene.”

About the Author
Nayaswami Krishna 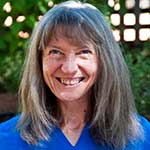 Nayaswami Krishna has been with Ananda for over 33 years, serving at Ananda Palo Alto and Ananda Village since 2000. Now at Ananda Village, she coordinates the archive talks given by Swami Kriyananda, Treasures Along the Path. She was a Music teacher prior to coming to Ananda; she sings in the choir and volunteers for the Ananda Music Ministry. She and her husband Paalaka serve together as outreach Ministers. They are also avid hikers.
Read more