United Nations Declares June 21 as the International Day of Yoga

The declaration came after the call for the adoption by Indian Prime Minister, Narendra Modi who addressed the UN assembly stating, “Yoga is an invaluable gift of India’s ancient tradition. It is not about exercise, but to discover the sense of oneness with yourself, the world, and nature.” By embracing yoga, we embrace the world. Through inner peace, we bring world peace.

Paramhansa Yogananda, a great master from India, came to show us our infinite potential. From the East to the West, he brought the liberating technique of Kriya Yoga:

“Kriya Yoga is ‘union (yoga) with the Infinite.’”
—Paramhansa Yogananda, Autobiography of a Yogi

Patanjali defined yoga as the neutralization of the vrittis (vortices) of feeling in the heart (Yogas Chitta Vritti Nirodha). Yogananda expounded on this meaning, stating:

This is the essence of yoga: to neutralize the waves of reactions in the heart.

With the practice of true yoga, we can be ever happy inside; ever peaceful.

World peace starts with inner peace, thus, such a technique as Kriya is a gift to the world. One that can calm the hearts and minds of all who practice, and through the upliftment of each individual, bring higher awareness to the planet.

Download an introduction to Kriya Yoga booklet here: The Path of Kriya Yoga

The Peace and Harmony Prayer of Yogananda

“To be a peacemaker; be peaceful, first, in your own heart.”
—Swami Kriyananda

If you are having challenges with another person, visualize that person in light and for one minute pray:

Then visualize yourself in light and pray for 15 seconds:

The prayer also came with these additional words:

“Do this five times a day — three or four times might work, but five times practically never fails.”

Using This Prayer for World Peace

With Nayaswami Devi, co-director of Ananda Sangha Worldwide, shares a visualization for world peace and harmony with Yogananda’s prayer. The title of the music is “Peace,” by Swami Kriyananda (founder of Ananda).

The Science of Kriya Yoga

The science of Kriya Yoga, mentioned so often in these pages, became widely known in modern India through the instrumentality of Lahiri Mahasaya, my guru’s guru. The Sanskrit root of…

Paramhansa Yogananda said that natural calamities such as earthquakes and hurricanes are the result of the excessive build-up of negative thoughts and emotions around the world. Healing prayers and positive… 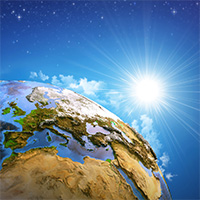 Meditation and Peace and Harmony Affirmation

Introduction to the Path of Kriya Yoga

How Is World Peace Possible?