Ego, or ego-consciousness. (1) Ahankara is the root cause of self-awareness. (2)

It divides the world into “mine” and “not mine.” (3) The other three aspects of mind are manas (perceiving mind), buddhi (intelligence), and chitta (feeling). (4)

By identifying things and qualities in the world, ahankara enables the soul to relate itself to perceived objects. (1) If the soul is founded in ignorance, or avidya, then ahankara may lead itself to be separate from the divine. Paramhansa Yogananda has characterized the ego as soul attached to a body. (5)

Working with chitta, the emotional aspect of mind, ahankara may lead the soul to fall into delusion. For example, if ahankara identifies with a thing, then chitta may incite an emotional response. Thereby the soul is bound to the object in rounds of karma. (1) 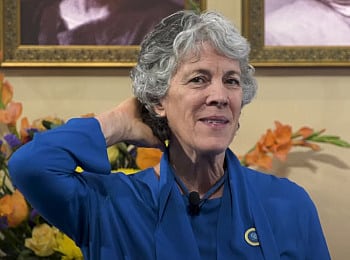 Ahankara also refers to ego identification on a cosmic scale. The ego principle exists even when the ego is not limited to an individual body, where it is centered in the medulla oblongata. (6) It may also be expanded to the Self in all creation. In this case, the body may be considered the entire manifested universe. Realizing itself as the cosmos, the Self is freed from ego feeling. (2)

Yoga teaches the individual to identify the ego with the greater Self. In seeking guidance, the self must use buddhi to discriminate between the feelings caused by limited ego and the intuition brought by cosmic consciousness. Ego allows the self to live in the world, whether in delusion or consciousness. (3)

How to Transcend the Ego