These are thoughts of daily life are from over a year ago — I’m just now sharing them!

This is an experiment, and I’d be glad to know what you think of this format in the comments. 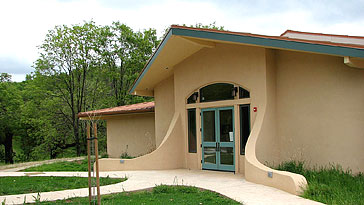 Right now I’m standing in the auditorium of the Joyful Arts Center, a 60+ foot high work-in-progress near the schools of Ananda Village.

It’s going to be a beautiful building. Not only will be, but is — even without windows, finished walls, or carpets. You can see the starry night sky, clear and calm, through the openings, soon to be windows, at the back of the stage. They reflect on a lake that the auditorium overlooks. Quiet, and humbly magnificent.

An architect once told Yogananda, “Immortalize your ideals in architecture.” It’s being done, here!

Tonight was the first vow of the pilgrim ceremony on the American continent! Around 100 individuals stepped forward to formally dedicate their lives to seeking God.

The vow is as beautiful as it is universal. It says,

I understand, and intend from now on to live by my understanding, that life is a pilgrimage, of which the final goal is to find and merge back into God.

I will endeavor resolutely, therefore, to direct all my thoughts and actions toward that end.

I will offer up all material desires for purification in the fire of divine bliss.

I will offer up all attachments for purification in that cosmic fire.

I will search my heart daily for any lingering desires and attachments, and will offer them to Thee, my Cosmic Beloved.

I will strive to be an example to others of a pure, discriminating, and noble life.

I will offer the fruit of all my actions and labors to Thee alone.

Bless me, and direct my footsteps ever to the summit of Thy holy mountain.

This morning was the last event of Inner Renewal Week. The whole week has been deep — over the period of a week, I’ve never in my life felt such deep dedication to living for God among my fellow disciples.

A guest at The Expanding Light once said to me, learning that I live at Ananda Village, “You are blessed to live on holy ground.”

There are holy people here: if I doubted it before, I’ve seen it this week, and don’t doubt it now. And holy ground is born from holy living. 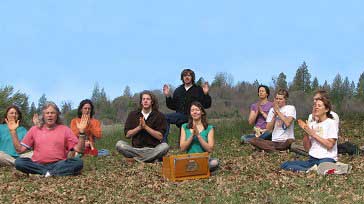 February 12, Where Science and Spirituality Intersect

A friend and I were having a conversation last night. He’s just back from India, and while he was there, he did some research on an ancient Hindi astronomical text. It describes the universe being created by Brahma issuing forth on both sides of Vishnu.

He thought this was very important. “Vishnu represents consciousness,” he explained. “Brahma is the creative aspect of God. And ‘on both sides’ — that’s just how black holes are supposed to work, shooting matter from both sides of them into space. Of course it can be true on a mythical, spiritual level, too. It can be true on many levels.”

The yogis have long known many scientific facts that only recently were discovered by scientists themselves: the existence of galaxies, for example, and the fact that all matter is really only different vibrations of energy.

At some point we reach, in our search for scientific knowledge, a place beyond which we cannot go: the realm of the spiritual. But spirituality, because it is a higher order of science (you could say, because its hypothesis has been repeatedly verified by saints in all lands), has no restrictions. It can, when it is founded in true wisdom and not mere intellectual understanding — or worse, dogma! — help us also to understand the nature of the physical universe.

February 16, See Something New Every Day

We monks at the Ananda Meditation Retreat have been watching the John Adams miniseries together. It’s about the life of one of America’s first presidents.

Usually I react to what’s happening — my mind says, “Oh, wonderful, he’s president!” or, “That doesn’t seem like a good idea, he should be more polite!” This attitude is exhausting.

So this night I tried to listen more to the characters — to ask “Where are they coming from?” — but in such a way that I would able to feel it. Words by themselves are not enough.

It’s too early to know the results of this experiment, but doing it was fun. Who wants to judge everyone all the time? Life is beautiful and delightful. Why miss out on the art of Creator?

I asked Rose (pictured below) if she could help get in touch with a new group of people who are interested in coming to this summer’s Living with Spirit program for young adults.

Her response was responsible and balanced:

“No,” she said, “I think I need to finish other commitments first, to other projects for Living with Spirit that I said I’d do. But,” she continued, “When I’m done with those, we can talk about it again.”

When someone who is interested in finding Truth makes sure that they speak the Truth — in this case by not making commitments that can’t be followed up on later — it adds magnetism to their speech. 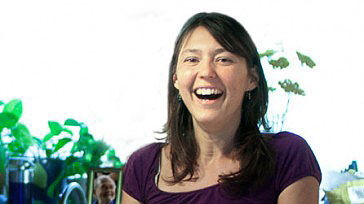 February 20, Tense with Will, Relax and Feel

In Seattle, while I was taking the Ananda course in Raja Yoga, Nayaswami Hriman told us the true story of a woman who practiced the Energization Exercises regularly.

One day she was stopped at a red light. Checking her rear view mirror, she saw a car barreling towards her own. It couldn’t stop in time, and she knew that in a moment there would be a collision.

Instead of panicking or responding with fear, she used that moment to make a very practical decision: to relax.

She escaped the accident with no injuries, which she credited to having been able to relax completely in that short space of time. She credited her ability to relax so completely to her regular practice of Yogananda’s Energization Exercises.

Owing to some health issues, I’ve occasionally, recently, been doing an occasional meditation lying down.

My experience is that these meditations are consistently sub-par: they aren’t concentrated and therefore they lack depth. The best I can say for them is that they are easy.

Years ago I had back problems and had to spend most of my meditations lying down also. When I finally was able to sit up, I told Nayaswami Hriman, who I spoke with every couple of weeks, “There’s a huge difference!”

He nodded knowingly. He hadn’t told me before simply because meditating lying down was the best I could do. Knowing how inferior it was would have been discouraging.

Most of us have had, or will have, thousands of lousy meditations in our meditation “careers.” The important thing is to never give up.