The following is the second half of a two part interview with Dr. Aditya Gait, a resident medical doctor and member of Ananda’s Kriya Yoga Community in the countryside outside of Pune, India. Dr. Aditya is also a Brahmachari member of the Ananda Renunciate Order. 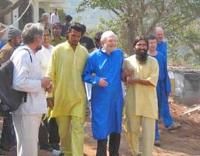 Aditya and a fellow monk with Swami Kriyananda

Jaya: There are good hospitals in both Pune and in Lavasa, but what sort of medical facilities are in the neighborhood of Ananda? Are there clinics nearby?

Aditya: There are small clinics in Pirangut, about 17 kilometers away, but they are quite expensive for the villagers and not at all up to the mark. Few doctors are available and they often give incomplete treatment. Two government dispensaries are in the area where we are staying but the villagers aren’t happy with their service and, again, the medicines are expensive.

I’m getting my medicines from a company in Gujarat that was started by a group who is consciously keeping prices low. Their medicines are at par with any drug company in the world but at only around one tenth the cost. I’m also trying to keep my consultation fees affordable for the villagers. They are twenty rupees only.

Jaya: What sort of medical problems do you typically see in Watunde? What is the greatest need, locally?

Aditya: What you see mostly are the basic seasonal illnesses, asthma, and injuries. 60-70% of the ladies are deficient in iron and have anemia which leads to fatigue and pregnancy complications. Alcoholism is a problem but it takes time to gain people’s trust before it can be addressed. Malnutrition is not so common in the village but the tribal people who stay on the hilltop, some of them are malnourished.

In the long run, what will help most is better health education and reinforcement of things they already know but lack the initiative to do, such as better ways to cook food and how to grow healthier crops. They grow sugarcane as a cash crop but don’t grow spinach or other leafy, green vegetables. All of the villagers have cows but they don’t drink that milk. They sell it. We need to teach better hygiene also. The villagers know these things but are not putting them into practice.

Jaya: Who typically comes to you now for medical attention?

Aditya: The people who now come are from the local villages (Watunde, Borde and Kharawade) and from the tribal village on the hilltop. The local village population is around thirteen hundred but only three to four hundred are staying at any one time. On any given day, eight to ten are ill. Last year I had medical camps in two nearby villages and got a very good response.

I’m sure if we build a real clinic with local people involved, I can reach maybe ten to fifteen villages in the vicinity. Almost all the villagers now have to go to Pirangut and that can be expensive for them.

Jaya: Because you didn’t finish your residency, is there a problem with you operating a clinic and practicing medicine?

Aditya: I can serve as a General Practitioner but not as a Surgeon, but even as that, there are many surgical procedures I can do, especially in a life threatening situation or when in remote areas. When there is no one else to help, you have to do it. I do need a license to run a clinic and since I will also be the lab technician, I need a license for that too and in India, a special license is needed to run a chemist shop. Doctors don’t usually run chemist shops so I will need to explain the situation to see if they can give me that license. Those three things I need before I can run this clinic.

Jaya: Because you are not from this area, have you been well received?

Aditya: Yes. I had that doubt too at first, but the villagers are happy. They see me as an outsider but when they also see that I am here to help them and my prices are very competitive, it immediately breaks that barrier. Being from an ashram also helps because they feel we are service oriented. 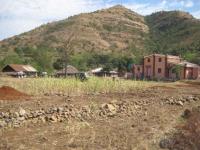 You have to be absolutely selfless when serving in this way. There has to be no expectation that people should respect you because you are a doctor. In one of my rural clinics, someone came up to me and asked, “Where is your certificate? Where are you from? Why are you here? How much do you charge?” He was trying to intimidate me but in the end he shook my hand.

I was prepared for such things because I know that I am not from this part of the country. If you are absorbed in giving, you won’t have these problems. If you have expectations, things may go well for awhile but when something bad happens you will feel discouraged. You need patience. It takes time to build something and it takes time to build trust, but I could feel from day one that this is the right thing to do.

I’m learning to speak Marathi now which I only understood before but could not speak. Hopefully, by the time the clinic starts, I’ll at least be able to converse with the patients.

Jaya: What comes next? What is your plan?

Aditya: If we can provide basic care and provide for some emergencies, I think that is what is needed now. With the container now here, setting it up is the next thing. Maybe in a few months we can have a lab for basic investigations and a place where people can come for urine and blood tests. I’d like a small procedure room and at the very least, a supply of medicines. I already have a basic surgical kit. Also, once we have a space, maybe visiting doctors can come.

Soon, we’ll run an electric wire from the community to the clinic and we are expecting solar panels from the USA. As you can see, we have a lot of space and there are no trees around the container so we can put up those panels to provide electricity for when the regular power goes out. A water tank and a composting toilet are also in the plan. Already we are planting a small garden.

Jaya: That’s pretty ambitious. How are you able to fund it all?

Aditya: Up to now, it has been through donations, mostly from devotees in Pune. We have sent out mail seeking help in whatever form someone wants to offer it and have had a few replies. One devotee from America contributed a lot of surgical instruments, exactly the thing I needed.

I have kept prices very low, almost negligible, because I first must build a trust relationship with the local villagers. It isn’t my intention to make the clinic a profit-making business but I would like to see it grow and be financially stable to better serve people. Perhaps one day we can put it on enough of a healthy footing to attract more doctors and devotees who are in the healing professions.

In Maharasthra, we have the most health related NGO’s in rural areas in India, so a lot of doctors are service oriented in this part of the country. Many doctors want to serve but they find it difficult to take that initial step. I’ve also met doctors who are very keen on moving to our community but I can understand why, with families, they cannot abruptly leave everything to come here. I have to get things started first.

Jaya: At the moment, what is your biggest need?

Aditya: Honestly, for now, I need money to get set up and started, to buy the medicines, and to bring in electricity, waterlines and utilities. Today we have one container, but in time and with peoples’ help, we could have a permanent building where specialists could sit. I don’t see why people someday would not come from Pirangut or even Lavasa to get treatment here because it would be holistic and nice.

(Watunde Village is located at the base of the big hill in the background of the photo above. See the same hill in the previous village photo. The Ananda community is 50 meters behind the photographer.)

Jaya: What additional community projects are you working on, other than the clinic?

Aditya:  A lot has happened in the last one and a half years. At the monastery right now, we are putting up solar panels so as to have electricity and, later on, for the clinic. Also, we are trying to get a solar pump ready to bring water up and are making a composting toilet and a shower house. We just finished our meditation space. Initially, I was working in the garden and was buying supplies in the city one day each week for the community kitchen but now others have taken over those tasks.

Jaya:  What does your family think of all this?

Aditya:  They would be very happy if I came back home because my father has a clinic and he would be interested in having me help. They think I am just serving the rural areas and say, “Why don’t you see patients in the rural area over here?” But my aim is to serve Master’s work more than anything else. To be a channel in whatever way I can is the reason I am at Ananda. My mom is happy as she knows I am doing something good but my poor father doesn’t understand it at all. I love them and pray for them. I know Master will take of our souls. 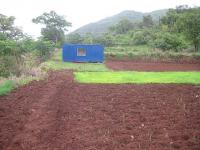 Jaya: What has been your greatest gain in this project?

Aditya: The immense satisfaction of serving: serving my guru, serving the local villagers, serving the ashram. Building a community and doing something for others to follow has brought me great satisfaction and contentment.

When Swamiji asked, “What do you think of a rural clinic?” I realized he didn’t want me to cut myself off from medicine. He was happy I had taken up this path but he also wanted me to serve. I’m happy to do so because I never disliked what I was doing before. It’s just that I like what I am doing now so much more. Swamiji asked me to do this thing and I know things will work out. This container seems so empty today but I have a strong belief that it is just the beginning for something much, much more.

Editor’s note: If you would like to contribute to the clinic project in Watunde Village, please write to us at our regular contact information. We can put you in touch with Dr. Aditya, explain his needs, and clarify the options available to you.