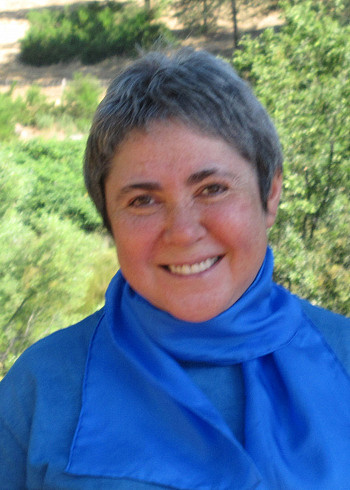 “What a trippy life it’s been!” That was what my friend Nayaswami Maria said as she lay on her deathbed. If not her last words, they at least summed things up.

I wish I could interview her and find out what it was that she was thinking of. I only knew her in her last five years, and it’s safe to say that she had a lot of interesting life experiences before then.

She moved to the U.S. at 16 with her sister, Bella, who later moved with her to Ananda. She never said much about her previous life in Russia. When Naidhruva, then editor of Clarity Magazine, asked Maria to write about something that happened to her there, she said, “The best thing that ever happened was that I left!” (She did end up writing a short article with a story from her childhood.)

She moved to Ananda Village in California after deciding not to be a nun at another spiritual group, but she retained a strong monastic vibration. What that means exactly, I’m not sure. I think it means being strong in knowing what you want when what you want is God.

She and her sister, Bella, both came here. For a time, Maria and her husband Devarshi served as ministers for Ananda in Seattle, where in 2003 I came to discover Ananda. But by that time they’d moved back to Ananda Village.

One thing I remember about Maria is that really, no matter what her job title was, she was a minister first. Where I was concerned with the next technological breakthrough and how to apply it to our back-end (that’s a technical term, I swear), her focus on was improving people’s spiritual lives and finding ways to help them. She started the question and answer section of Ananda.org, whose answers have now been seen roughly a bajillion times (editor’s note: it’s actually 2,449,216 times). She said, I think half-seriously, that our line of masters must have inspired the creation of the internet — how else could a little group of Master’s devotees reach people in every country in the world?

After she left her body, surrendering it to brain cancer, Nayaswami Jyotish remarked on how she had made friends everywhere in online correspondence. Others got to know her through her talks, still available as videos from Inner Renewal Week and Sunday Service. Her friendship with me was much less about what I could do in the office and more about how I was growing as a person. She was one of the first friends I made when I moved to Ananda Village, and she watched me become a monk.

Though she supported my monastic life, looking back I think she had a sense that my personal growth lay in other directions. As she rested on her bed in the last weeks of her life, in an uplifted state, sending blessings to the community and inspiring many people here, Radhika, now my wife, came to visit Ananda Village for the first time. I’ve often wondered if Maria didn’t help set that in motion, and by extension, all the things that came after, including Radhika doing Maria’s old job. 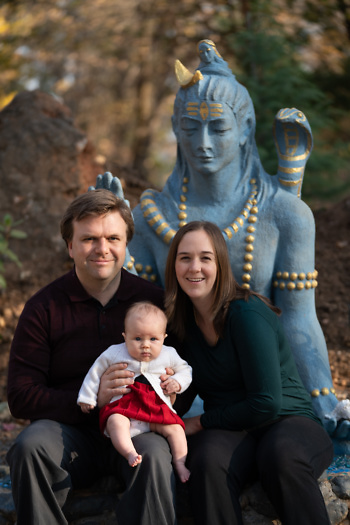 Radhika, myself, and our three-month-old daughter. The statue of Shiva behind us was made by Maria’s sister, Bella, and was a frequent pilgrimage destination for Devarshi and Maria on their walks around Ananda Village

She was a good editor, and might have remarked on the backwards approach in that last sentence (“I’ve often wondered if she didn’t,” rather than, “I’ve often wondered if she did”). I’d sometimes say, “It’s not nothing,” and she’d repeat it, turning it over like it was a joke. Her sense of humor, playful, irreverent, helpful, was one of the things about her that I noticed most. She knew that humor makes it easier to face life’s challenges. Also, humor is funny.

As Maria was preparing to leave her body, she saw only five people, and I wasn’t one of them. She was leaving everything behind, cutting ties in an expression of freedom. I exchanged a few emails with Devarshi, and received one from Maria, dictated through him. “I’m not going to get sentimental,” she began, sharing a few bits of advice, including to get help and “Get a vacation!”, and ended with, “You are very dear.”

It was touching of course, but my reaction was to write back and tell her not to worry about me but to focus on her journey to the afterlife! In relating this embarrassing story, I’m comforted by knowing that she never read or heard this response.

After she died, I had two jobs to cover, and it didn’t feel like a good time to take a vacation. But I felt her presence nearby.

When I saw Devarshi, we talked about how our conception of who she is was clearer now that she wasn’t in her body anymore. I felt, in tuning in to her, Divine Mother’s love. Still do! Devarshi told me, “You know, I think she had such a strong personality that it sometimes made it harder to see what was behind it.”

I knew that while on one hand Devarshi was devastated, on another he was deeply inspired. While everyone faces these things differently, to me his attitude after her passing is a gold standard of living in the presence and remembrance of God, and an example of how that can lift us above even our hardest tests.

I don’t think an article can really give a good sense of who she was and now is. Maybe it helps a little. I wrote about her when she passed, and maybe I’ll try again in a few years, tuning my aim just a little bit better. There’s a long way to go, but that’s no reason not to try.

Her sister Bella also left her body after an extended fight with cancer. I never met her in this life, but probably we’ve crossed paths in some other story. Not long after I started working with Maria, Bella came to her in a dream and said that she only had four years left. Maria told me about this after Christmas in December, 2009, and said she just had one year remaining. It wasn’t anything that she wanted shared, and though I was grateful that she was willing to tell me, I couldn’t ignore the feelings it brought up. I started crying during a voice lesson later that day and couldn’t tell the teacher why.

“What a trippy life it’s been” — the adventures that God sends us on, the lessons we learn from them, the achievements we make — only to leave everything in the world behind us in the end. We get to take our spiritual growth and our karma, but that’s about it. If we’re wise, we let go of the drama and keep the joy and the friendships.

The ending to Maria’s life was an interesting one. After learning that she had brain cancer and not much time left in the world, she prayed, “Free me from cancer.” As others have pointed out, she didn’t pray to be healed of cancer, but to be freed from it.

Did this happen? Swami Kriyananda said that she’d gone to a place where it couldn’t touch her any more. So the cancer never left her body; instead she left behind her cancer. Referring to her, he said,

It is so thrilling to see people reach that point of understanding where death itself is welcome—it doesn’t matter. You know that you have accomplished what you needed to accomplish, you know that you are who you want to be, and with all of this, you’ll see that underlying all of life there is bliss.

(There’s more at the end of this article: Nayaswami Maria in Memoriam.)

Maria was one of a small group who helped Ananda get onto social media back when MySpace was the big site and Facebook was still up-and-coming. One of the things she liked about it was seeing the posts from people outside Ananda, just seeing people be themselves, the way she was herself, unapologetically, through the end. Her last Facebook post, left a month before her passing, was still just her being herself: 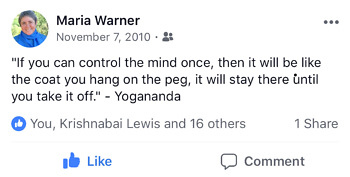 Maria: thanks for your guidance, support, and friendship over the years, and for helping me learn by editing the things I wrote. If I’d had more time to edit this, it would have been shorter!