Ask anyone — even a doctor — to put their hands on their hips, and chances are that all hands will go to their waists. Ask new yoga students to stand with their feet hip-joint distance apart, and you’ll see the legs widen beyond the typical, anatomically correct distance of 3 – 4 inches. Sadly, you’ll see some (yes, mostly women) with perhaps a not-so-good self-image, set their feet farther apart than the width of the entire pelvis.

So where are those hips anyway?

The hip joint is the place where the femur (upper leg bone) connects to the pelvis. Both the iliac crest (i.e., the top of the ilium: upper part of the pelvis) and the greater trochanter (the large protrusion on the outer side of the femur, near but still below the hip joint) are often mistaken for the location of this elusive, but otherwise relatively simple, ball-and-socket joint.

You can find it by pressing your fingers deep into the crease that is formed when you bend forward from the hips and — oops, if you don’t know where your hips are, you will probably bend from your waist, and we’ll be right back where we started from. So instead, stand up and bring your knee to your chest. (If your balance is not the best, or if you are reading this in high heels, I suggest that you do this from a seated or supine position, as in the photo below.) Your hip joint is deep behind the crease that you create between your lower abdomen and your thigh.

The inferior (lower) end of the femur meets the tibia and fibula to form (along with the supporting soft tissue) the knee joint. From that point upward, the femur angles laterally upward until (approximately) the greater trochanter, where it turns back in medially and ends in a ball-like surface (the femur head). The femur head inserts into the acetabulum, the socket shaped depression formed where the three sections of the pelvis (ilium, ischium, and pubis) connect. The ball-and-socket joint is cushioned by cartilage and synovial fluid.

Bones near the hip joint (with iliopsoas muscle)

The hip has a fairly wide range of motion in most directions: flexion, extension, adduction and abduction with lateral rotation. Abduction without lateral rotation is limited to about 40 degrees, because at that point the superior femoral neck bumps into the upper edge of the acetabulum, restricting the motion. The degree of both lateral and medial rotation varies widely, as can be attested by practitioners of hatha yoga.

Some find that Padmasana (Lotus Pose) and Virasana (in this case, the version that’s a cousin of Vajrasana, in which one sits between the heels after medially rotating the hips a significant amount) are simple matters of limbering some of the muscles around the hip joint, while others find those poses to be exercises in futility and/or exercises to guarantee knee injury. More on this later. 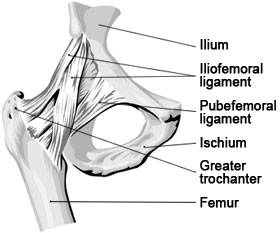 Major ligaments of the hip joint

To keep the ball in the socket, so to speak, there is a thick joint capsule that is reinforced by ligaments, the strongest being the iliofemoral ligament. To further support this joint, which is key to locomotion, large muscles criss-cross the joint to stabilize it and provide the power for walking, running, jumping, and a host of other moves on and off the dance floor.

From above the hip joint, some of the deep pelvic muscles that support and move the hip include the piriformis, psoas, iliacus, gluteus medius, gluteus minimus, and last not but not least the largest muscle of the body, gluteus maximus. (Because the psoas and iliacus attach to the femur at the same spot, they are sometimes referred to jointly as a single muscle: the iliopsoas.)

The muscles that support and move the hip from below are the quadriceps femoris (four muscles in one), sartorius, hamstrings (a group of three muscles), adductors (a group of five muscles), and tensor fasciae latae. And there are more muscles very close to the joint, such as the quadratus femoris, which, along with five other muscles, form the group known best as the hip rotators.

Asanas and the Hips

Have you ever been in a class with a teacher who poetically and metaphorically instructs students to open their hearts, soar with the birds, or create space in their hip joints? We often view these instructions as nice sentiments that can help one to go a little deeper into the pose, but not as specific anatomical instructions. However, if you are in my class and I ask you to create space in your hip joints, I will mean what I say, and I will expect you to be able to do it. If I tell you to get taller and take a load off of your hip sockets, I will expect you to do exactly that as well. Are you saying, “Good luck!”?

No, it’s quite possible. Engaging proper core and postural muscles, as well as the varied movements of yoga practice, have helped students stand up taller and literally take a load off of their otherwise squished spinal discs. I have had several students literally gain as much as half an inch of height from their yoga practice! 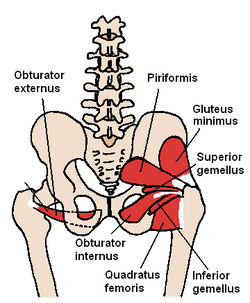 Posterior view of obturators and gemelli

Okay, I know that there are no discs to squish in the hip joints. So how can one create more space in the hip joints while those joins are bearing weight, as in a normal standing position, or Virabhadrasana II, or Parsvakonasana?

The key lies in four little — and little-known — muscles called the obturators (obturator internus and obturator externus) and gemelli (gemellus superior and gemellus inferior). Better known for helping to create rotational and other movements of the hip, they also combine to lift the pelvis up out of the hip socket (when the femur is in a fixed position, as in standing asanas) or pull the femur down away from the socket (when the pelvis is in a fixed position, as in inversions such as Sarvangasana). Together they form a sort of “hammock” support for the pelvis.

Naturally these small muscles can use all the help they can get from properly engaged postural muscles, and in certain positions, other core muscles as well. (See the “Engage Your Core?” article.) These larger muscles usually get most of the credit, but without the obturators and the gemelli, it may be a sinking proposition.

What is the best way to engage the obturators and the gemelli? Um … well … poetic visualization! It might be rather ambitious to try to selectively engage any one of these muscles. Instead go for the sensation of lifting the pelvis up out of the hip joints, and know that those muscles will make it happen. Feel the pelvis lifting up out of the hip joint as the spine extends upward to “soar with the birds” (or something like that).

For the hip joints to be healthy, we need them to be both strong and flexible. Imbalances and improper movements and/or posture can take a toll on the hip joints themselves, but often their neighbors — the knee joints and the lower back — will suffer the consequences and be injured. 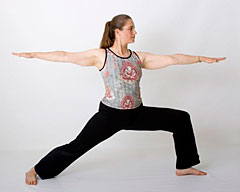 Learning and teaching proper body mechanics — as well as never forcing movements or positions — is essential for preventing injury to the hips and surrounding structures as well as for rehabilitating them. For example, bending forward from the waist instead of bending forward from the hip joints — especially when combined with tight hamstrings — can put a lot of pressure on the lumbar spine and cause injury.

Range of motion in any joint — not just in the hip — is a matter, not only of muscle flexibility, but also of the shapes of the bones and the angles at which they come together to form the joint. In the case of the hips, the shapes and angles of the femur and acetabulum (hip socket) determine the point at which the superior femural neck contacts the superior rim of the acetabulum. Obviously, this bone-hitting-bone action (called “compression”) prevents all further movement in that direction, regardless of muscle flexibility. 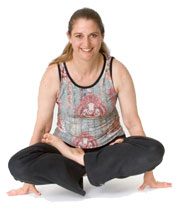 Because those bone shapes and angles vary widely among individuals, there are wide disparities among different persons’ potential maximum range of motion in the hip joints (and other joints as well), independent of their muscle flexibility. And as I mentioned earlier, many people can never go safely into asanas such as Padmasana and Virasana — sometimes because they lack muscle flexibility, but other times simply because of the way their bones fit together. And some people may be able to do one of those poses safely, but not the other. Trying to force oneself into these positions can lead to debilitating and permanent knee or back injury.

So be hip. Know how to move from your hips, not your waist. Know thy hips, and respect their range of motion. And don’t forget to give them a little space!

About the Author
Nicole DeAvilla