Some might say relationships are a distraction on the path to God. There was a time when I thought this was true. Ram Gopal, the sleepless saint from Paramhansa Yogananda’s Autobiography of a Yogi had a strong impact on my earlier opinions about this with his personal story:

For twenty years I occupied a secret grotto, meditating eighteen hours a day. Then I moved to a more inaccessible cave and remained there for twenty-five years, entering the yoga union for twenty hours daily. I did not need sleep, for I was ever with God.

I read this as a heartbroken 22-year old disillusioned by the promises of human romance and the fickleness of this world. I was intrigued by his statement and had the immediate thought, “That’s for me!” I got right to work and began studying Yogananda’s home lessons on meditation. I stopped calling my friends and withdrew socially.  The only time I really saw people was when I went to work at my job at a restaurant. I considered even that minimal interaction to be a burden. After work I’d immediately go back home, sit in the dark and practice my meditation.

This went on for about a year. I noticed that I was drastically being drawn towards a solitary and monastic view of life.  After much soul searching, I applied for the Self Realization Fellowship (SRF) Monastic Program.  As soon as my application was accepted, I set sail for the ashram. It was here for the first time that I found people who were just like me.  I was thrilled to be living with men who also had suffered enough in the game of material pursuits. They, likewise, had finally cried out to God for guidance and God had sent us Paramhansa Yogananda.

I thought I had finally found my exact path and place. Unfortunately, as the weeks went by I began to bog down. I did not feel that I was making very much progress. I wanted to be able to go breathless and soar into the high states described in the Autobiography of a Yogi. These states were maddeningly inaccessible to me, no matter how hard I tried! Besides all of that, the intense silence and austerity of the ashram were not helping me to feel very blissful.

My heart was cold and I was becoming aware of something else. Karma–unfinished karma. I held judgments about the other men. I judged their diets, their sleepiness, their inability to keep still in the meditation room and more. You name it. I judged it! I began to wage a war in my own mind that I had no idea about how to fight. I also had suppressed desires that, no matter how much I refuted their existence, continued to distract me daily.

Freedom from anger, hate, pride, and desire is more important than renunciation of outer, material involvements.

One day a few weeks after I arrived, there was a big fire in a nearby forest that was heading in the direction of the ashram. There was a lot of activity storming around my quiet cabin as the men were gathering up all of their belongings and preparing to evacuate. Then a knock came at my door. It was the sweet Indian man who worked at the registration desk. “We are on mandatory evacuation! Please report to the refectory where we will load the vans and drive to the Lake Shrine in Los Angeles.” I immediately felt a thrill of joy in my heart! I was finally getting to leave!

I was so happy about this – too happy about this. I began to reflect on my reaction during the long drive from San Diego to Los Angeles. I was sitting in the back of a van full of monks who were deeply concerned and praying for their home to be spared.  I began to think – If I am in any way happy that the ashram is about to burn, perhaps I should not be living there.

Fortunately, the fire did not burn the ashram.  We returned a week later and by then I had firmly made the decision to leave. When I was accepted into the program, the SRF monk had told me that I had monastic written all over my face.  Now, after only a few weeks in the program, they were planning to employ me as the next head cook-but my karma was not going to allow this. I was not meant to be a monk. Subsequently, I entered into one of the most confusing years of my life. I had no plan for the future. I had no vocation. I had been so sure that I would be like Ram Gopal. I had unreservedly let go of every other part of my life plan and now, without a course to follow, I was feeling depressed. 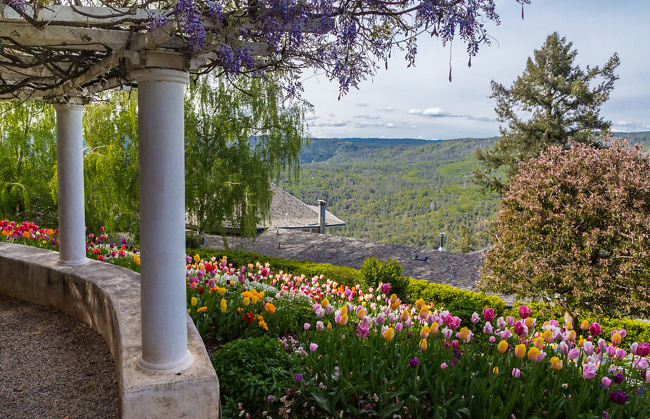 Then, one day I picked up the book A Place Called Ananda. I had already read and enjoyed many of Swami Kriyananda’s books about Yogananda but never one so centered around his life and heartfelt ambitions to build spiritual communities. As I became engrossed in this book, I wondered about this place called Ananda and whether or not it could be for me.

It was an 8-hour drive to Ananda from where I lived in California. I had been warned a while ago about visiting Ananda by the monks of SRF.  So I was able to procrastinate about going there until my living situation forced me to find a new home. Around this same time I spoke by phone with Narayan, who was then the sales manager for Crystal Clarity Publishers.  He very enthusiastically encouraged me to come and experience the magic of Ananda Village. I finally decided to visit the community.

Thank God for Ananda! When I arrived I was greeted by some of the most loving people I had ever met. They welcomed and respected me immediately. I saw in their eyes such a radiance of joy and enthusiasm that I knew this place was for me. Aside from that, there were people that had married and lived the spiritual life together for decades. It was in them that I felt something that I knew I wanted. I soon came to the realization that relationships were important for me and that I needed to learn to love God in all of his children.

In the book A Renunciate Order for the New Age, Kriyananda speaks of New Age monasticism as not world-rejecting but samadhi-affirming. This resonated deeply with me and I gradually became aware of what the karma was in my heart. God is love and I had not yet learned how to love people. Therefore, I cannot know Him until I do. The people at Ananda who seemed so happy were that way because they were learning how to love God, not just in meditation but in each other.

I have lived and served at Ananda Village for over ten years. I can now say that I am absolutely convinced that relationships help us to grow spiritually in leaps and bounds! The friendships I have cultivated, the people who have served alongside me, my spiritual family of hundreds of dedicated yogis, the many ministers who have inspired me to my core to love God more deeply; my wife Melody and our 6-year-old son Japa—all of these have helped me to learn about what real love is. God is love. The more unconditionally we love, the more we merge with Him.

Meditation is still a primary aspect of my life, but now I find that embracing whatever I am doing with the spirit of being an instrument for God’s love is the main factor in my spiritual growth.

How do relationships help us grow? By teaching us how to love – by challenging our perspectives on love and revealing to us how conditional our love really is. When we overcome a personal challenge by choosing love and acceptance instead of all the other more accessible and easier paths of blame, self-justification, prejudice and escapism-we begin to transcend our karma, whatever it may be. Swami Kriyananda writes:

Everyone is looking for love in this world. Aren’t you? I have learned that if you want love in your life, the first step is to begin offering it through kindness, appreciation and compassion toward everyone you meet—especially to those with whom you have difficulties.

In fact, when you meditate, remember that Yogananda once defined meditation as “making love to God.” We are able to go much deeper when we make our meditation an offering of love to God rather than approach it with a stern and world rejecting attitude.  In this spirit, we can’t help but leave our meditations more satisfied and more willing to give and serve.

We can practice by seeing our outer daily lives and social responsibilities as an offering of love to Him.  In time we will find that God is using us as His channels to share His healing love with all creation. This is what we feel in the company of the saints and masters. It is what lifts us up in their presence. This love is what they deeply yearn to give to us, if we could but make ourselves receptive by following their examples.

Ananda: Joy Is Within You

Juliet Palmer, an investigative reporter, receives an unusual assignment from her boss at Profiles magazine: she’ll visit a spiritual community in northern California that has developed alternative solutions to the…