What do you think makes for success? Is it an end result? Or is it the way we do something?

This blog post is simple: it’s the story of a photo shoot done by a group of young adults living at Ananda Village. There’s a burgeoning youth movement within Ananda now, which I wrote about when it first started, and which Lisa Clark also wrote about recently from India.

The photo shoot had a clearly defined goal: get some good photos to publicize Living With Spirit, a summer program at Ananda Village for young adults age 18 – 30, that combines yoga and meditation with organic agriculture.

The photo shoot went very well—but it might have been worth doing even if our cameras had magically erased themselves immediately after the shoot.

What I’d like to communicate is a couple of things: one, the joyful, exuberant quality of the group, whose youthful energy is a unique expression in Ananda; and two, how the morning’s photo shoot showed us that the energy which goes into a thing is more important than the thing itself. Because we were serving, and having fun, it felt like we had a success in the doing as well as in the results. 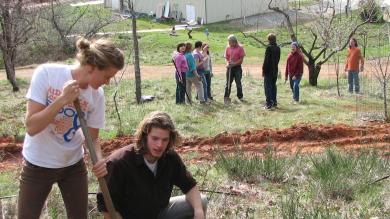 We started in the “experimental orchard,” most of us posing, trimming, or digging, and several of us taking photographs. Ananta and Maria McSweeney, the coordinators of the program, are long-time and very experienced organic gardeners.

Swami Kriyananda recently asked them to move from Ananda Sacramento, where they were the spiritual directors for over 20 years, to Ananda Village, where they now farm and work with the young adults. In about a week, they and a number of young adults will move into a group house specifically for young adults, near the center of Ananda Village. 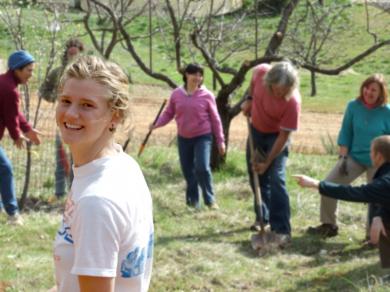 This was the photo of the morning—the one that we needed to get. It gives a clear idea of half of what the program offers: friendship, community, and organic gardening; and because there’s a face looking directly at the viewer, it’s a good one for getting people’s attention.

Please note Greg Traymar in the background, pointing off into the distance. (I had to throw out a couple of photos because people started imitating him!) Greg lives at Ananda Village and is working closely with Bharat Cornell, a minister at Ananda and the founder of the extremely successful Sharing Nature Foundation. (Greg directs its USA branch.)

After 10 to 20 minutes of taking photos in the garden, we walked over to where the actual summer program is going to take place… 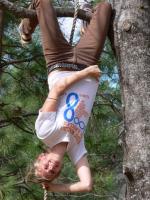 … which provided a perfect opportunity for some tree climbing. Rachel (above) is one of the program leaders. 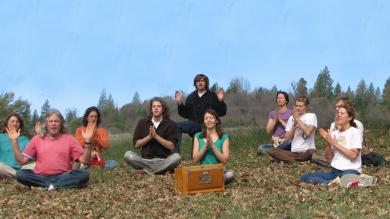 Rose led a devotional chant, which gave us time to take a number of photos and to record video. The chanting ended with a prayer.

This is one of my favorite photos of us. It has both good composition and a nice feeling behind it. It was a blessing to be there, taking photos; a service opportunity that I’m very grateful for.

Next we moved uphill to take some photos of yoga postures. Some of them were amusing. 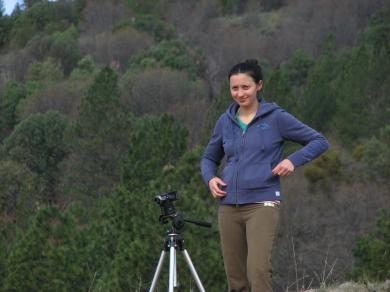 Above, Melody is setting up another shot for the video recording. A talented member of our group, currently taking film courses at a liberal arts college near Los Angeles, is working on turning this footage into a video that we can share.

We have people cooperating from many locations and also cultural backgrounds. (For example, the flyer was designed by a young woman from South India.) One of the things I enjoy about publicizing this program is that it’s a team effort. Together, we accomplish much more than any one of us could on our own.

To end our photo shoot, Ananta led a 10-minute meditation. For me, though I was still taking photos, it grounded me in the sense that what we are doing with this program, with this photo shoot, and through all our marketing, is a form of service—to God above all, but also to everyone who will benefit from learning about the program, and who could be blessed by being a part of it.

Perhaps you could call this desire to serve our “ulterior motive.” I’ve never so clearly felt that doing publicity can be a service, as when working on the publicity for this program. I suspect it is because my attitude is beginning to change from one of “What can I get?” to one of “What can I give? What is the right next step for this person, or this group of people, that I’m trying to reach?” Marketing of this kind is expansive, and a joy. 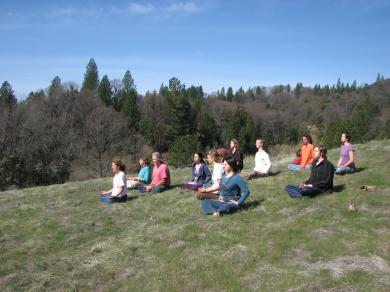 Our second meditation closed with a prayer that we draw the right people to the program: the people who are seeking it, and who can benefit from it.

The photo shoot was simple, and photo shoots happen all over the world many times a day, but how many include periods of meditation and prayer?

For one reason or another, it was joyful. Perhaps it was because of our meditation, but also, I often feel a sense of joy and blessing when this group of young adults together.

Well, to begin with, it was such a joy to have us all together. Even if it was for a “fake” workday. I loved how everybody just got in there and helped, whether it was shoveling or pulling scotchbroom, or zooming in with the cameras and taking great shots.

My favorite part was when everyone was chanting underneath that huge oak tree. It was so magical. I knew Paramhansa Yogananda was watching us, flowing through us, and literally contacting those who will come to our program this summer.

There was so much fun energy and good ideas within our group. I just kept thinking and saying, isn’t this so great!?

During the photo shoot, we weren’t focused on the outcome; we were focused on the energy. In fact, I think we were more interested in having joy, in having fun, than in taking great photos. And it was all in service. Surely God blesses this kind of attitude.

Swami Kriyananda has often said the things we do don’t matter so much; what is important is how we do them. This photo shoot was an experience for me in why, though the things we do may be normal, the way we do them can make them deeply meaningful. 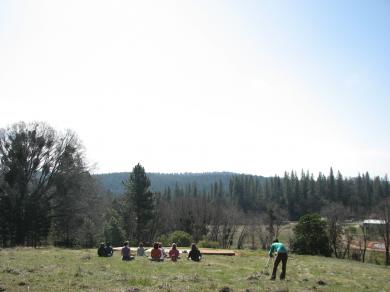 This group here at Ananda Village is just one part of the worldwide youth movement within Ananda, which is also taking place in Europe and India.

Living With Spirit, the program we were taking photos for, is taking place for the 3rd year this summer, June 28 – July 12. It’s an immersion in spiritual living, based on the teachings of Paramhansa Yogananda. You can click here to learn more about the summer program, or to share it with some young adult you know who is looking for deeper meaning in their life.