A short time after Steve Jobs passed away, a friend of mine at Crystal Clarity Publishers received a phone call.

“We’d like to place an order for 500 copies of Autobiography of a Yogi. Do you have that many?”

It turned out that those books — eventually purchased from Self-Realization Fellowship, who had enough in stock — were needed for the memorial service for Steve Jobs, the famous founder of Apple who was inspired throughout his life by Eastern spirituality.

In 1974, Jobs traveled to India with a friend after reading Be Here Now and Paramhansa Yogananda’s Autobiography of a Yogi. The trip turned out to be a disappointment. Jobs later said that he realized “we weren’t going to find a place where we could go for a month to become enlightened.” Though he regularly attended a zen meditation group on his return, his work life eventually became a higher priority.

Copies of Yogananda’s classic autobiography were handed out at Jobs’s memorial. This news came out recently in an interview that is worth watching:

Marc Benioff implies that Steve Jobs’s keys to success were the spiritual qualities he had developed. “He went to India,” said Benioff, “And he had this incredible realization that his intuition was his greatest gift, and that he needed to look at the world from the inside out.”

I talked with Les Kaye, a member of the Los Altos zendo when Steve Jobs attended it. He said that Jobs was interested in exploring his spiritual self, particularly when he first returned from India. Jobs would take long evening walks with the leader of the zendo, exploring spiritual subjects.

He seemed more interested in the concepts of spirituality than in its outward practice, but his spiritual energy found expression, Kaye said, through his work.

For example, Jobs believed in possibility. “He could invent things that no one had ever dreamed of,” Kaye said. “There were no roadblocks in his mind — nothing that said, ‘Oh no, you can’t do that.’” Some part of him always stayed very open and child-like.

He was able to take setbacks as blessings. In this talk to the 2005 graduating class of Stanford, he said, referring to his firing from Apple in 1985, “The heaviness of being successful was replaced by the lightness of being a beginner again, less sure about everything. It freed me to enter one of the most creative periods of my life.”

He could concentrate intensely on his work, pouring all of his energy into it. “If you don’t love something,” he said, “You’re not going to go the extra mile.”

He appreciated inner freedom. “I think if you do something and it turns out pretty good,” he said, “Then you should go do something else wonderful, not dwell on it for too long. Just figure out what’s next.” Sometimes he used the thought of death to help him stay non-attached. “Remembering that you are going to die,” he said, “Is the best way I know to avoid the trap of thinking you have something to lose. You are already naked. There is no reason not to follow your heart.”

He deeply valued, and trusted, the power of intuition. “Your time is limited,” he said, “So don’t waste it living someone else’s life. Don’t be trapped by dogma — which is living with the results of other people’s thinking. Don’t let the noise of others’ opinions drown out your own inner voice. And most important, have the courage to follow your heart and intuition. They somehow already know what you truly want to become. Everything else is secondary.”

Even though Jobs may not have had a strong or consistent practice for all of his life, these qualities are spiritual. One finds in his quotes above a certain level of the understanding that is expressed in all great religions.

Jobs didn’t have all the answers, though, and was unsure about God and heaven for much of his time on earth. Towards the end of his life he told his biographer, “I’m about fifty-fifty on God.” He just didn’t know. But every year Jobs would read Autobiography of a Yogi.

At death, perhaps, some things became clearer. The day before he passed away, he told his sister that he was going to a better place.

Find a Copy of Autobiography of a Yogi

If you’re interested, we have the original edition of Yogananda’s autobiography free online, and you can also find it at our publishing house, Amazon, or anywhere else; just look for the blue cover. 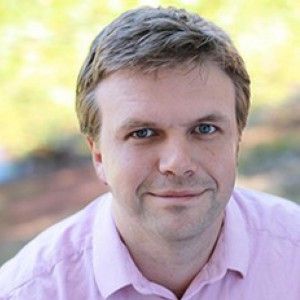 Nabha has served with Ananda for many years as a meditation teacher, manager, and author, helping Ananda to share the teachings of Paramhansa Yogananda through websites, apps, and other channels. He lives at Ananda Village with his wife, Radhika, and their young daughter.