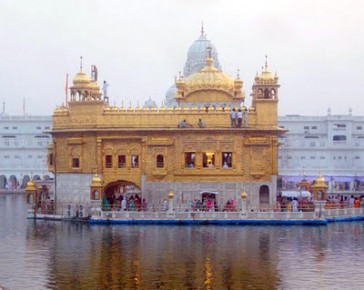 It takes less than six hours by train to travel the 450 kilometers northwest from Delhi to Amritsar in the state of Punjab. Gazing out the window at the passing landscape, it’s easy to see why this region has long been considered the “breadbasket” of India, tempting waves of invaders through the ages. Nature has blessed Punjab with fertile soil and abundant water from the five rivers that cross its plains (Punjab means “five waters”).

This is a land of industrious farmers but unlike those who till the densely cultivated lands along the Ganges and in many other parts of India, here men ride Mahindra and Ford tractors instead of breaking soil with bullocks and hand labor. It’s a wheat culture rather than one centered on rice. The land is drier, fields are bigger, the population is less dense and there is more prosperity. With just a little stretch of the imagination, I could picture myself in California’s agricultural Central Valley.

The stereotypical Punjabi is said to be boisterous, big-hearted, and hardworking. If he has money, Indians say he likes to show it, but I think this may simply be jealousy. He is said to be expansive, self-confident (pushy?), and uncultured, though Punjab has a rich cultural tradition. Does this caricature of industrious farmers sound familiar? When India was partitioned in 1947, Punjab was split, forcing hundreds of thousands of displaced Punjabis to flee from the Pakistan side and resettle in Delhi.

To this day, snooty old-time Delhi-ites still tell jokes at the their expense. I’ve found Punjabis to be good natured and generous and their food delicious. Physically, they can be robust and because they have been called upon through the ages to defend India against invaders from the West, they have a martial spirit. When you combine all these qualities with personal self-discipline, honesty, and religious commitment, you have the Sikhs. 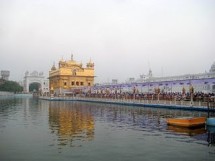 The Sikh religion (Sikh means “disciple”) was founded by Guru Nanak Dev in the last half of the fifteenth century in that part of the Punjab now controlled by Pakistan. In those days, much of northern India was governed by Muslim rulers while the majority of the population was Hindu. From an early age, Guru Nanak displayed an inclination toward mysticism and he is said to have achieved enlightenment at the age of thirty after a deep samadhi of many days. Upon coming back to normal consciousness, his first words were, “There is neither Hindu nor Muslim, so whose path shall I follow? I shall follow God’s path.” Thus the Sikh religion was born. Guru Nanak proceeded to expound his revelation and traveled widely, drawing followers to his non-sectarian teachings of ceaseless devotion to God, honesty, and service.

Sikhism in its present form is based upon the teachings of the first ten gurus of the faith, beginning with Guru Nanak and ending with Guru Gobind Singh in the early 18th century. Before his death, Gobind Singh proclaimed the Sri Guru Granth Sahib, the holy writings/teachings of the first ten Gurus, to be the eleventh and final Guru of the Sikh religion. That scripture is worshiped and brought out in procession each day at the Golden Temple in Amritsar, a place of pilgrimage for all devote Sikhs. 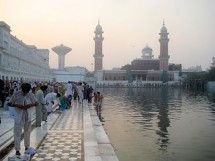 I traveled to Amritsar with a small group of pilgrims in early October. It was by happenstance that we found ourselves there because our original intention had been to visit Gangotri, the headwaters of the Ganges in the Himalayas, but this year’s monsoon was so heavy and late in the mountains that numerous landslides/washouts of the roads made travel there impossible. An earlier Ananda Italy tour to Badrinath that preceded ours ended up stranded and never did reach their goal. Reluctantly, we canceled our mountain journey and substituted a trip to Amritsar and Dharamasala in its place. In retrospect, I think God’s hand was guiding us to something even better.

Amritsar is a major city not far from the Pakistani border. It’s sometimes said, “If you’ve seen one city in India, you’ve seen them all,” because other than one or two notable points of interest, each presents the same dull face of endless small shops, bumpy roads, chaotic planning, bad air, and lots of people busily getting on with life. Amritsar is like that too except in the middle of town stands the Golden Temple complex encircling a wonderful pool of water, in the middle of which sits the Golden Temple itself, a beautiful marble structure sheathed in gold.

Pilgrims come by the thousands to circumambulate the pool (Amristar roughly translates as “pool of nectar”) and take darshan of the Guru Granth Sahib, housed in the temple. There, Sikh elders read from the scripture throughout the day, interspersing their recitation with prayers and bhajans, all broadcast non-stop through loudspeakers. I found it both mesmerizing and uplifting.

The Mogul Emperor Akbar first granted the sacred site of the Sarovar (water tank) to Guru Ramdas, the fourth Sikh guru, in the late 1500’s. There he constructed the first pool. Guru Arjan Sahib, the next guru, laid the foundation stone for the temple several years later and it was finished during the life of Guru Hargobind Sahib in the first decade of the 1600’s. In the centuries following, the temple became the focal point of the Sikh community and has many times been at the center of turmoil. The last such outbreak was in the 1984 when Indira Gandhi ordered a military assault, using armored vehicles and tanks, against Sikh separatists holed up in the temple. Massive damage was inflicted and hundreds (some say thousands) of civilians killed. This led to international outrage within the Sikh community and directly to Gandhi’s assassination by her body guards a few months later. 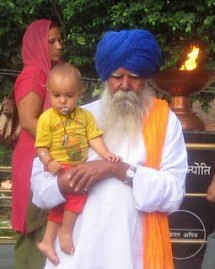 When visiting the temple, you leave your shoes outside at special stalls provided and cover your head with a scarf or bandana before entering. These are freely available if you don’t have your own. Once inside the grounds, you see the Golden Temple sitting serenely on the water, as if floating.

I joined the steady procession of pilgrims circumambulating the pool, and eventually made my way to a queue of devotees waiting on the causeway that leads across the water to the temple. There was no jostling and shoving as is so common in an Indian crowd. All was orderly and steady. Inside the temple, readings from the scriptures and recitation of prayers proceeded while the ushers tried their best to keep the pilgrims flowing through. Exiting the inner sanctum, I found a niche by a side door where I sat with other pilgrims while listening to the sounds wash over me.

Food is served throughout the day at no cost and I found a pavilion where one can nap if tired. Taking a dip in the pool is permitted and I saw a number of people meditating and reciting prayers. I sat for meditation next to a fellow doing a regimen of pranayam and received not even a second glance from the crowds passing by.

A bit later, I noticed a group of what at first appeared to be rough-looking teenagers following me, all the while exchanging conspiratorial whispers with one to another. I shifted my wallet from my back pocket to the front, just in case, and let them catch up, ready for whatever. Gathering their courage, they surrounded me and breathlessly asked, “Where are you from? Why are you here? Do you like it?” They were a group of schoolboys wanting to practice their English and curious about this stranger who so appreciated their traditions. They hadn’t met many foreigners like me and wanted to know everything about where I was from and where I was going. They were really very sweet and upon parting, we shook hands all around. 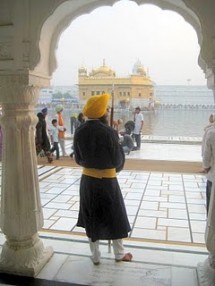 Stationed along the pool at regular intervals are khalsa guards. Their dress is a wonderful deep blue, knee length tunic with a bright yellow sash and turban. All sport thick black beards and carry a dignified, authoritative bearing that says, “Behave yourself!” Maybe it’s the six-foot, metal-tipped spear they carry at their side that gives the impression they are not to be fooled with.

Thousands of pilgrims come to the Golden Temple each and every day with palpable devotion. The grounds are never closed and even in the wee hours of the morning, you will find a crowd. Perhaps it’s a function of their being a minority subjected to past persecution from both Hindus and Muslims (before Partition) that has engendered in the Sikhs a bearing of dignified steadiness and strength. I feel an affinity for them. They carry a sense of nobility and by reputation are said to have been the best soldiers in the army of the British Raj. Even today, their martial spirit is legendary.

There is an old joke (I ask my Bengali friends to please forgive me) that the British used to tell when their capital was in Calcutta. If they wanted to get something important done, they would form a committee comprised of a Chatterjee, Banerjee, Mukerjee and a Singh. The first three names are typically Bengali and they would do the talking and arguing. The last name is that of a Sikh and he would get the job done.

It was on our way to Dharamasala that we stopped in Amritsar. If you should find yourself in this part of India and are inclined, I highly recommend you stop at the Golden Temple. Visit during the day and then come back after dark for a different experience. Stop too at the Jallianwala Bagh and Wagah (I’ll write about those later.) for a memorable experience. I think you’ll enjoy Amritsar as much as I did.