The year 2009 was one of great expansion for Ananda Sangha outreach. All of it came through the grace of God, which is reflected in the title of this post.

Here are some of the year’s highlights.

He began the year by rewriting two books: The Path, which is now The New Path: My Life with Paramhansa Yogananda; and Do It Well!, which he did because, in his words, “I realized Do It Now! needed to be a lot deeper.” (Editor’s note: Do It Now is available as a free iPhone and iPod Touch application, and Do It Well! appears on the homepage of Ananda.org with a new saying every day).

Swami Kriyananda also worked, in collaboration with Catherine Kairavi, on her upcoming book Two Souls; Four Lives – the Lives and Former Lives of Paramhansa Yogananda and His Disciple Swami Kriyananda. The book is due to be published in February.

In May of 2009, Swamiji had a health crises while traveling from India to Switzerland. However, through the grace of God and Guru, he experienced a miracle revival.

Ever since then, his health has been robust enough to permit him to travel and work extensively on a multitude of projects. In Swamiji’s own words: “In Lugano I’d had to go everywhere in a wheelchair. When I left Italy [a month later] I didn’t even take my cane.”

Right after receiving the miraculous healing, Swami Kriyananda conducted public events to launch his new book Religion in the New Age in Rome and Milan, gave many interviews, and worked on editing Images of Wisdom booklet, presented to him by the devotees of Ananda Assisi. It consists of excerpts from Swami Kriyananda’s lectures over the years.

Upon arriving to U.S. in July, Swamiji conducted the celebration of Ananda Village’s 40th Anniversary.

This was followed by weeks of daily video recording of the Bhagavad Gita commentaries, now broadcast now on Ananda’s channel on YouTube and a TV station in India — 160 episodes in all!

Other events with Swami Kriyananda at Ananda Village included the Spiritual Renewal Week in August, and Swamiji’s Spiritual Anniversary in September.

September also saw a big public lecture in Los Angeles, during which he launched The New Path.

Swamiji departed the U.S. for Italy in October. Upon arriving at Ananda Assisi, he proceeded to film a documentary of his life with the Italian TV station Anima. In Swamiji’s words: “The shows took only three days instead of the scheduled seven. No re-takes were necessary!”

In November Swami Kriyananda went on a pilgrimage to Medjugorje, Bosnia-Herzegovina, to meet visionaries who communicate with the Virgin Mary. He describes a profoundly inspiring experience of divine love while meditating at the shrines. Click here to read about it.

Also in November he finished writing A Renunciate Order for the New Age, and launched the Nayaswami Order with a deeply inspiring initiation in Assisi.

Around the same time, Swami Kriyananda was giving a public lecture at a peace conference in Assisi. Padre Anthony, another speaker there, saw him in his Nayaswami blue robe, and asked about it.

In Swamiji’s words: “When I explained it to him him, he asked how many members we had. I said, ‘One.’ Then came the Nayaswami ceremony, and since then, we have over 200 in the new Order.” Click here to visit the new website dedicated to the Nayaswami Order.

Christmas activities at Ananda Assisi included Swamiji’s lectures and other public appearances. In the midst of a busy holiday season, he was writing a new screen play The Answer, based on his life as described in The New Path. Along with that, he was also working on a film script for The Wayshower, a story about Yogananda’s life and mission. 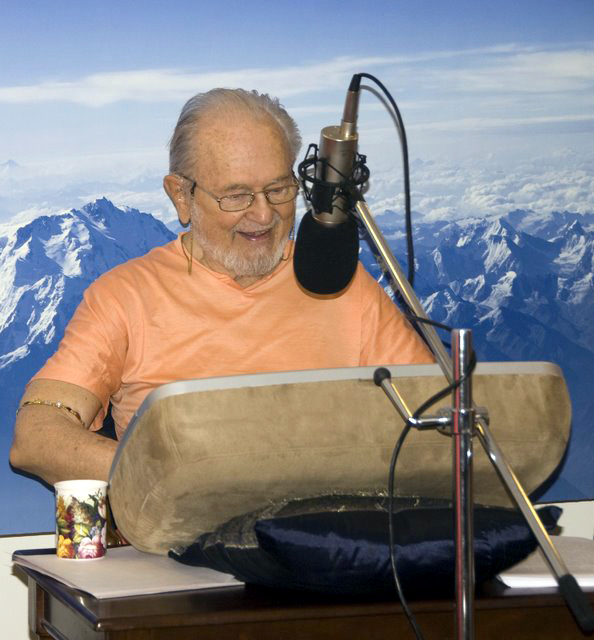 Around New Year’s, Swami Kriyananda traveled to New Delhi, India, where he had a public launch of The New Path and The New Renunciate Order books, immediately followed by a Nayaswami Order initiation he conducted for Ananda devotees there.

At the time of this writing, Swami Kriyananda is taking a well-deserved break. This will be followed by travel to Ananda’s new community in Pune, more public events in India, and the filming of more Bhagavad Gita commentaries for a daily TV show in India.

From the Expanding Light Retreat at Ananda Village

Hosted, taught, and inspired over 1500 guests from all over the world in hundreds of classes, programs, and retreats.

New books: The New Path: My Life with Paramhansa Yogananda, Religion in the New Age, Crystal Hermitage Gardens, Do It Well!. New audio books, and electronic versions of our existing books for Kindle and Sony eReader.

Completely redesigned our flagship website Ananda.org. Designed and published brand new websites for Ananda Clarity Magazine, Ananda Online Classes, and The Nayaswami Order. Created first-ever Ananda iPhone and iPod Touch application with Swami Kriyananda’s Do It Now!. Launched and expanded Ananda’s presence with the Social Media, counting over 15,000 fans and followers on Facebook and Twitter. In 2009 Ananda.org had almost half a million visitors from 205 countries, and well over a million pageviews.

Ananda Ministers on the Road

Celebrated its 40th Anniversary on July 4! Established Ananda Farms and a Community-Supported Agriculture system. Conducted permaculture class series and planted a Forest Garden. Broke ground on the beautiful new Living Wisdom Center building as a flagship for education, the arts, and community workshops.

Crystal Hermitage Spring Garden Tours attracted over 1200 visitors from as far away as Southern California and Bay Area. Click here for information on this year’s upcoming Spring At Ananda tours.

Contrary to the popular saying, the youth is NOT wasted on Ananda’s young!

They hosted a Living with Spirit summer program for over 30 participants, established Inspiration House, a young adults ashram at Ananda Village, and planning not one, not two, but three summer programs in 2010!

As always, we deeply appreciate your interest, prayers, and financial support as we strive to serve our ever-widening global community of spiritual seekers.