The inspiration to go to medical school came when I was living in southern California in a little town next to Encinitas, where Paramhansa Yogananda had his seaside hermitage. I knew nothing about the spiritual path, but I was a long distance runner and frequently ran on the beach below the hermitage. Often during those runs I felt compelled to stop just below “Swami’s place.” It was as though a force was compelling me to stop.

One day, while stopping at that beach in the middle of a run, I felt the inspiration that I should go to medical school. In that moment I also found my guru, though it would take time for me to actually know that.

Praying and listening with the heart

Medical school is an experience in learning how to memorize a huge amount of data. I always appreciated having that fund of knowledge, but I also understood that I could not truly help my patients simply by relying only on that information. During my internship and residency, I somehow knew to keep a note on my clipboard reminding me to always pray and ask for guidance before I saw a patient. Guru’s grace descending again!

Now, in my medical practice, I ask for guidance all the time – over and over. I’ve had miraculous experiences because I’ve been willing to be quiet and listen with my heart. Before walking into a patient’s room, or while sitting with a patient, I’ll pray to Yogananda: “Master, I need to know what to say to this person, and how to say it.”

Then the words come, the diagnoses come, and miracles happen. The stories that have evolved through my work are precious.  Here are a few tales of these divine gifts.

Something was terribly wrong

One day, after I had seen close to 30 patients, I stopped at the door of the treatment room before going in to see my last patient. Inwardly I said, “Divine Mother, You have to guide me because I’m exhausted. I’m going to miss something important if You’re not with me.”

Waiting in the room was a 92-year-old man, the father of one of the nuns who ran the hospital. She and her sister were with him. He was a gruff old man and announced to me right away, “I haven’t been to see a doctor in ten years at least. I never go to the doctor. I have a little back pain – just give me some medicine!”

When I asked him to tell me about his back pain, he replied with annoyance, “There’s nothing to tell you! I’ve just got back pain.” After pressing him for more details, he said that a very severe back pain had come on suddenly the night before. His daughter added, “It was so severe that it made him sick to his stomach.”

As I listened to this story, right away I got the feeling that something was terribly wrong. I said to him, “I’m going to leave the room. You’re going to get undressed, and I’m going to come back and examine you.” Muttering a few expletives, he refused to be examined, but fortunately his daughters were on my side.

I left the room. On the way back, before going in, I prayed, “Divine Mother, You diagnose this man. Something’s going on here.”

During the exam, I found nothing except a little of what we call “mottling” of his skin on his right side, which I assumed was due to the room being cold. But I still had this troubling feeling. So I said to him, “You are going to the emergency room. Would you like your daughters to drive you, or shall I call 911?”

The doctor in the emergency room knew exactly what that “mottling” meant, and quickly got him up to the operating room. The instant the surgeon opened his abdomen, his entire abdominal aorta burst open. Had this man stopped to go home, had we fought for another three minutes, he would have died.

The next day, my phone kept ringing. My doctor friends at the hospital called to ask, “How did you remember this sign?” I said, “I didn’t remember anything.”

I thought to myself, “How could I ever share this story?” From years of taking care of patients I knew that knowing all the facts and “signs” is important (I don’t want to miss a pneumonia, or an appendicitis), but most of the healing that’s happened in my practice has come through me. Everything important that I know about medicine, everything I have to give, comes from my having opened my heart to God.

Another day, when I had a completely overbooked schedule,  a new patient called saying he had a cold and needed to see me right away. To placate him I told my front desk staff to tell him I was not currently accepting new patients but as a favor would see him in my “next available” spot. He refused to accept the “favor” and called three more times, saying that the cough was “killing him.”  Then I had that feeling: “See this man!”

He was a generally healthy 32-year old man. I examined his throat, lymph nodes, and lungs. All were fine. Then something said to me, “listen to his heart.” But I fought back: “No! I’m busy.” Then again: “Listen!”

I listened and there was a murmur. He said no one had ever mentioned it before. I prayed, “Is this important?” I listened to his heart again and didn’t like what I heard. Most murmurs are what we call “benign,” but this one wasn’t. He needed to have an ultrasound of the heart the next day. The woman at my front desk said, “Impossible.” I said, “Make it happen.”

He had the ultrasound the following morning. It showed an aneurysm at the junction of his aorta and his aortic valve. The very next morning the man had open-heart surgery. The surgeons said he would have died very soon had it not been discovered and that it was congenital — it had been there since birth. Later, several of the surgeons called asking me “how I knew?” I decided not to try to explain, but in my heart I was pronaming to Divine Mother.

A special assignment based on inspiration

Several years ago a woman who had been having abdominal pain and other symptoms for about one year came to my office. She hadn’t seen a physician in years because she didn’t “trust” them. The previous day, however, she had seen a gynecologist who told her it was likely she had an inoperable tumor and, if so, her only alternative was palliative care.

This woman was filled with rage.  As we discussed her situation, she mentioned at least ten times that she hated her husband—that  she was just ready to leave him, but now with this tumor she might never get away from him. She and her husband had been disconnected for years, even as they raised their two children.

I asked her to give me a minute. I closed my eyes and asked Yogananda to tell me what to say to this woman and how to say it in a way she could hear it. When I opened my eyes she asked what I was doing. I said, “I was praying.”

After discussing the medical possibilities, I gave her referral slips for X-rays and lab work and scheduled a follow-up visit in two weeks. Then I told her I had a special assignment for her based on the inspiration that came when I prayed. I wrote out a prescription that told her to say three nice things every day to her husband.

Obviously upset, she said, “That won’t be easy.” She asked what those three things might be. I suggested that she tell her husband whenever he was home how glad she was that he was there, and to say it like she meant it—and then to think of two more things to say. She was quite disgruntled when she left.

As it turned out, this woman she did have an inoperable tumor. When I saw her again and told her what the tests showed, she was quite stoic. After a bit I asked her how things were at home. She looked startled.

She said, “Oh Dr. Rubenstone, when I left here I was so mad at you I thought I would never return. Later I felt compelled to try what you suggested, but I did it grudgingly. You told me it could just be an act so I acted, and I acted well. Within three days my husband was a different man. He took a leave of absence from work and he hasn’t left my side since. He has been loving, attentive, and generous. I have never seen this side of him before. Our home is filled with love.”

My patient died about three months later. She died at home, never having gone into a hospital. I was at her home many times and I always felt blessed to be there. Her passing was perhaps the most love-filled experience I have ever witnessed. I felt Yogananda’s blessing.

My Guru guided me into medicine and he has been with me ever since. In my practice I ask for guidance all the time. As long as I remember to ask for help, it comes, and miracles happen.

Tyagi Shanti, a Lightbearer and longtime Ananda member, lives in the Ananda Palo Alto community. She has a full-time medical practice specializing in “transformational medicine,” working with people as they move through major life transitions. She also teaches meditation, energy and healing, and “living wellness” at the Ananda Palo Alto Sangha. Clarity Magazine articles can be printed in "text only" format, using your own computer.

About the Author
Tyagi Shanti, M.D. 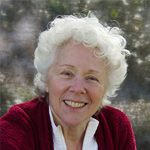