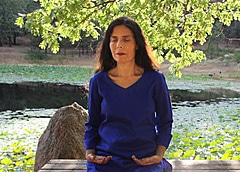 I was born in Israel and raised in a conservative Jewish family. As a child, I loved going to the synagogue and very much enjoyed the Jewish ceremonies and celebrations.

My father spent the early morning hours, before going to work, in prayer and inner communion with God. As a family we observed the tradition of Holy Saturday and from Friday dusk to Saturday dusk refrained from all worldly activity. We read the Bible, took walks in nature, and went to the synagogue. I believed in a good God and would pray to Him in time of need.

A growing sense of emptiness

Though raised in this devout, joyful tradition, in my teenage years I found myself questioning the existence of God and the purpose of life — who I was, and why I was here. Later, in my early twenties, I began to explore Eastern spiritual traditions, including Buddhism and yoga.

By my late twenties I had had my share of disappointments in relationships and career. I was then studying art in Kyoto, Japan. Outwardly things were going well enough, but inwardly there was a growing sense of emptiness and dissatisfaction. While lying in bed one evening and gazing at the ceiling, I prayed desperately from the depths of my soul: “God, show me the way.” This simple prayer shocked me. I was admitting that I had no clue as to who I was, or the purpose of life. Yet this deeply heartfelt prayer proved a turning point.

I wasn’t ready for THIS answer!

Shortly after offering this prayer, I knew I had to move to America and live in California. Trusting that everything would somehow work out, after living in Japan for almost three years, I moved to California. Two weeks later I discovered Ananda.

I was living with a Jewish girl friend in Palo Alto when I found a magazine that listed spiritual groups and retreats in California. But after looking through the magazine, I closed it in despair. There were so many listings! How was I to know which path was mine? I prayed deeply to God to show me my path.

A few days later, while walking in downtown Palo Alto and again praying to God to show me the way, I saw a sign in front of a building that said: “Yoga Center.” It was the Ananda Center in its old location, an office building. However, immediately upon entering, when I saw the altar with the photo of Jesus, I felt a pinch in my heart. I said to myself: “This is not for me! I AM JEWISH.” I walked out, thinking I would never return. God had answered my prayer, but I didn’t realize it. And I wasn’t ready for THIS answer!

I decide to borrow tapes

When my car battery died a few days later, a neighbor offered me the use of her car to go buy a new battery. Driving to the auto shop, I pressed the cassette button and heard a woman talking about healthy relationships. Her words touched a deep responsive chord in my heart. My neighbor later told me that the tape was of a talk by Asha Praver from the Ananda Center’s free lending library, and that anyone could borrow tapes.

With effort, I overcame enough of my resentment about the photo of Jesus to borrow tapes of talks by Asha Praver, co-director of the Palo Alto Ananda Center. Part of me was very drawn to these new teachings, yet another part of me was very much holding back. Nonetheless, as I listened to her talks over the next few months, and also meditated, the truth of these teachings began to resonate in every fiber of my being. I decided to explore further by going to a kirtan, an evening of group chanting.

Going to a kirtan felt safe: no one would see me or even know me. I found the kirtan very inspiring – it lifted me to a level of consciousness higher than I’d ever experienced. I decided I would visit the center again.

This time I mustered the courage to attend Sunday Service, arriving in time to attend the purification ceremony. If you, the reader, are not Jewish, you probably don’t know how it feels to a deeply religious Jew to walk into a church. I felt like a betrayer. I flashed back to my childhood and the primary school history classes in which I heard about the Jews who converted to Christianity. They betrayed God! I never wanted to be one of those weak-hearted Jews who betrayed their own God.

Yet here I was, at the age of 31, going to A CHURCH. My body was trembling slightly as I sat in the back. The light was dim. No one could see me — ONLY GOD.

After hearing an explanation of the purification ceremony, I decided I could take part in it. I took the piece of paper, wrote down a prayer, and went up to the altar and knelt before the minister, David Praver. But when I opened my mouth to say: “I seek purification by the grace of God,” I burst into tears. I was shocked and humiliated by my reaction, but David was very kind and compassionate.

I went back to my seat, calmed myself, and somehow found the courage to stay for the entire service. When it was time to leave, I stood in the line where the ministers were greeting people. When my turn came, the first words I blurted were, “I’m sorry but I’m Jewish, and I don’t really know why I’m here.”

Asha said very kindly, “We’re Jewish too.” I certainly didn’t expect to hear this. I thought I might faint. Luckily, I remained standing.

Later, having returned for another Ananda event, I learned that Asha gave private counseling to people. Asha agreed to meet with me privately and we set a day and time to meet. For the next days, I was in much emotional turmoil. Although most of my adult life I had been a self-directed person, I now felt powerless to resolve the inner battle raging within me.

When Asha and I met, I told her that my heart was aching to know the truth, and that I was drawn to the teachings of Paramhansa Yogananda. Intuitively, I felt the truth in them, but my mind rebelled. I asked her how was it possible for someone like me, who was Jewish, to be attracted to these teachings?

She said, “When you are desperate, God will pick you up and show you the way.” She also said, “If you can’t relate to Jesus, put that on the shelf. Just take what feels right and leave the rest.” She recommended that I read Swami Kriyananda’s book, The Path.

Asha’s advice proved very helpful. I started taking classes at the center and doing the meditation practices each day. More and more my heart was drawn to Ananda, but my inner battle continued. It was then that I made a firm resolution to follow the guidance of my heart, since my rebellious mind didn’t get me very far.

The hardest step of all

Nonetheless, it took two and a half more years to break through the fear and anxiety and embrace Yogananda’s path. I came to realize that the God I believed in was a Jewish God, and that my entire self-identity was wrapped around that concept. Each step of the way was like shedding a layer of myself. And there were still layers of old self-definitions to remove.

The final step, the actual taking of the discipleship vow, which meant accepting Paramhansa Yogananda as my guru, was the hardest of all. By then I had moved to Ananda Village.

While preparing to take the vow, the inner battle took on a new intensity. In Judaism, your spiritual life is between you and God. There is no “intermediary.” Yet here I was about to take a vow to a line of gurus, including Jesus Christ, allowing them to guide me to God. I felt I was cutting the umbilical cord that connected me to my religion, my family, and Israel. It was the most dramatic and important time of my life. I felt I had gone through a “death and rebirth.”

Though still afraid, I took discipleship. After the ceremony I felt great inner blessings and protection. I felt uplifted and light, as if the burden of the world had been lifted from my shoulders. It took much prayer, meditation, attunement with Yogananda, and the grace of God to break through the resistance, but once I became Yogananda’s disciple, I experienced a great sense of expansion and freedom. My consciousness had been released from the prison of my old ways of thinking into a greater world.

Through attunement with Yogananda I have learned to see Jesus for the great master he truly was. I also learned something Judaism never taught me: that the goal of life is to achieve the same level of enlightenment that Jesus, Moses, and all the great masters, including Yogananda, have attained. I was thrilled to learn that I too have that same potential.

Greeting Jesus as a friend

Some years ago, a Jewish woman attended the Thanksgiving Retreat at The Expanding Light Guest Retreat at Ananda Village. At the end of the retreat, she told the group about a profound experience she’d had during the retreat.

In the past, she had attended Sunday services at Ananda Village and enjoyed them very much. But it bothered her to see the picture of Jesus on the altar. If there hadn’t been a picture of Jesus, her joy would have been complete. After coming to many services and continuing to be upset, she decided to make peace with Jesus. She made a commitment that for one year every time she saw a picture of Jesus, she would greet him as a friend.

At the end of the year she came to the Thanksgiving Retreat. On Saturday evening of the retreat, she went to meditate in the Lahiri Mandir. No one else was there. She stood up at the end of her meditation and bowed before each photo of the Ananda line of gurus. Last of all, she bowed before the picture of Jesus.

Turning to leave, she heard Jesus say to her: “Welcome home, daughter.” She felt waves of peace and love flooding her being. It was a transforming experience.

After 21 years on this path, I am so grateful to God and to my Guru for leading me to my path and giving me the strength to break through the many layers of past habits and perceptions. I have realized, as Yogananda tells us, that the saints and masters are the true custodians of religion.

Nayaswami Diksha teaches at The Expanding Light guest retreat at Ananda Village. She was initiated into the Nayaswami Order in 2009. She is a Lightbearer and is married to Nayaswami Gyandev.

Clarity Magazine articles can be printed in “text only” format, using your own computer.